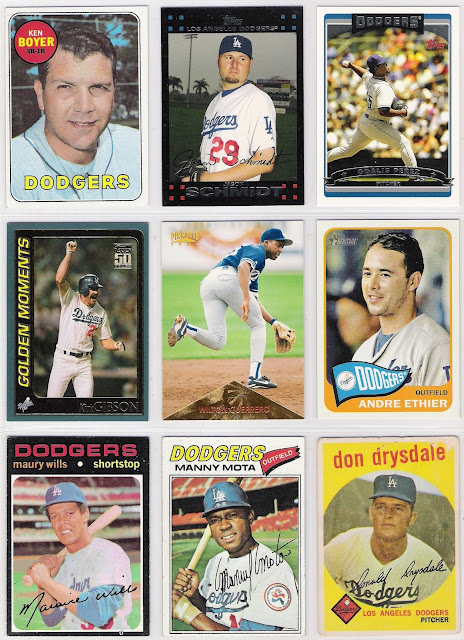 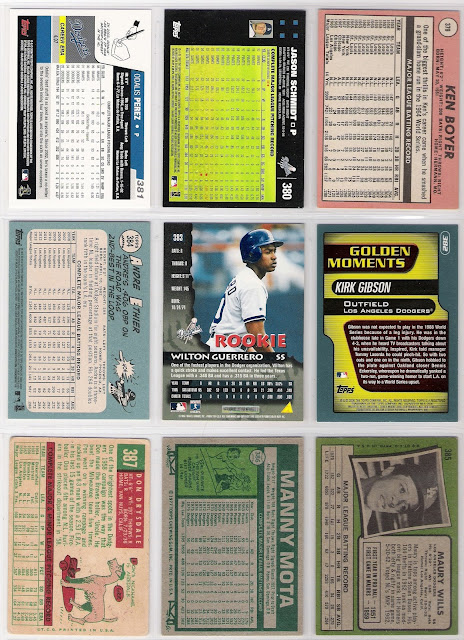 ken boyer's 1969 topps card is the only one (if you don't count the o-pee-chee version which has the same number so the question is moot) of him from his active career as a dodger. it was going to be in the set.

that boyer card confused me quite a bit when it first found its way into my collection. the back is different from most other 1969 topps cards, 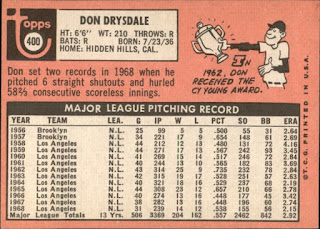 and certainly any other one that i had seen at that point. there is no topps logo or cartoon, and the text box doesn't include his name and height/weight etc, but rather his factoid. it still seems like a bit of an anomaly now, but at least i know that others like it exist, such as mickey mantle's final tribute. 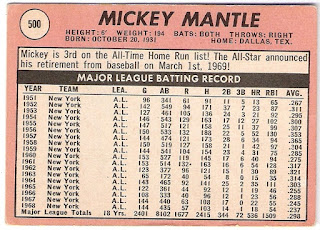 anyway, boyer was a former nl mvp who joined the dodgers for the last two seasons of his career (1968 and 1969). he did not appear in the 1970 topps set, which is unfortunate.

i  bought a lot of 2007 topps, and it was the first set i put together by hand in a few years. i didn't care for it too much, but i put a want list up shortly after starting to blog, and several folks helped out.  i still bought a factory set as i had done since the mid 1990's.  anyway, jason schmidt is repping the set here, and he had some pretty good years with the giants before joining the dodgers for the 2007 season.  unfortunately, he was unable to stay healthy and only pitched in a handful of games for the dodgers in 2007 and 2009 combined (he missed all of 2008 due to injury). when he did pitch, he did much better on the road than in dodger stadium - he was 0-4 with an era of 10.83 in his four starts at chavez ravine in 2007 and 1-0 with an era of 0.82 in his two starts on the road that year. in 2009, the trend continued as he was 1-2 with an era of 8.49 in his three home starts and 1-0 with a 0.00 era in his lone road start that year.

2006 topps makes its first appearance in the frankenset today, thanks to odalis perez. perez was my last hope for the dodgers to see some return on the gary sheffield trade.  i was quite disappointed when fox traded mike piazza to the marlins, but they did get sheffield in return who put up some of the best offensive seasons the dodgers had ever seen.  the other parts of that trade (bobby bonilla, charles johnson, jim eisenreich) dead-ended, and perez was part of the package (along with brian jordan) that the dodgers when sheffield was dealt to the braves.  jordan left via free agency, and after a couple of decent seasons from perez that got my hopes up, he had some mediocre campaigns and the dodgers sent him to the royals for elmer dessens during the 2006 season.  still, i have a soft spot for perez because he gave me a ball at angel stadium on june 30, 2006 - about a month before he was traded.

i was happy to see that topps considered kirk gibson's 1988 world series home run to be a 'golden moment' for their 2001 subset along with hank aaron's 715th career home run, bill mazeroski's world series winning home run, and kerry wood's 20 strikeout game, among other events.  i was even more pleased to see topps finally recognize nomar's home run 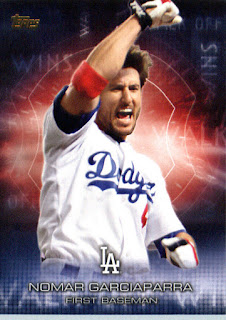 there is a well known saying regarding player development in the dominican republic that "you don't walk your way off the island", and wilton guerrero is an example of that philosophy.  he had a bunch of rookie cards in 1996, including this 1996 pinnacle card, as he was in line with a wave of young talent that the dodgers debuted in the '90s, kind of similar to what we are seeing from the cubs today. guerrero had only a few at bats with the dodgers in 1996, but spent most of 1997 with the big club and hit .291 that year.  unfortunately, he walked only 8 times so his obp was just .305.  even his brother, vladimir (a notorious hacker), took a walk more often.  he was traded to the expos during the following season.

next we have andre ethier's 2014 topps heritage card. i read over the weekend that ethier's return to the dodgers is not certain for this season.  that is too bad on a couple of opposing fronts.  first, he is now a 10 and 5 player, and the dodgers have literally nothing to show for not trading him prior to his gaining that status this past off season. second, we have not been able to see ethier build on his comeback season last year. i am more disappointed in the latter.

the next two cards are somewhat tied together. i'll explain a bit more in the "final thoughts" below, but maury wills (shown on his 1971 topps card) and manny mota (shown on his 1977 topps card) were traded together by the expos to the dodgers in 1969.  it was wills' second time around with the team and he played well enough to reclaim the shortstop position for a couple of seasons.  in 1971, in fact, he finished 6th in the league mvp voting, right behind roberto clemente.  mota, on the other hand, was the dodgers' primary left fielder in 1970 (and an all-star in 1973), but gradually saw his playing time decrease to the point of him being a pinch-hitting specialist by the time this card was issued.  it's worth noting that mota is striking a very similar pose to wills on his card, and the photo might even be from the same stadium.

speaking of stadiums, the 1959 topps don drysdale card features a photo from inside the la memorial coliseum which was the home of the dodgers for four years before dodger stadium opened.  the back of the card notes that his nickname is 'airedale' but i only ever heard him referred to as 'big d'.  of course, he was finished pitching by the time i was born. 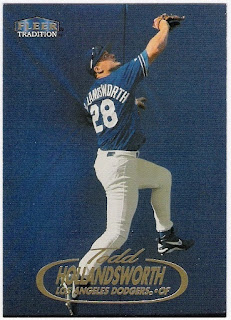 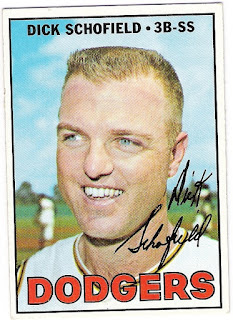 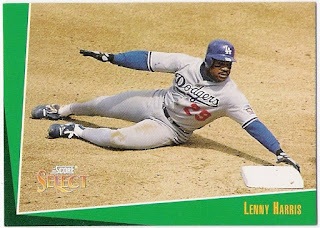 i think the scuffed up drysdale wins over the '77 mota.  i do like the 2001 gibson, but there are other cards depicting the impossible that i like better, such as the 1995 upper deck sp championship series card 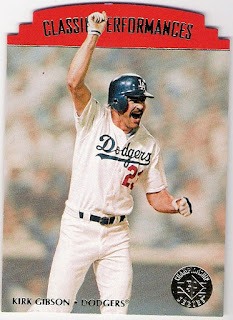 even if it is the same photo.

i don't think that i ever gave it much thought before, but seeing the 1971 topps card next to the 1977 topps card, i am made aware of how similar the designs are.  turn the black border to white, italicize the team name, capitalize the player name and position, but those are minor tweaks. the biggest change, of course, is the position in the pennant on the '77 card and i suppose that is why i never thought much about the similarities between the two.