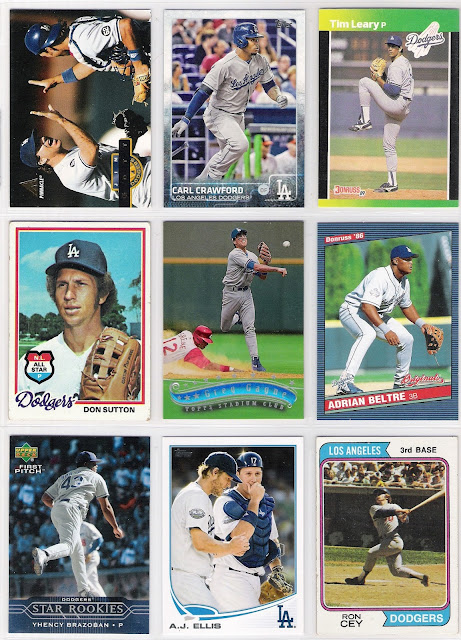 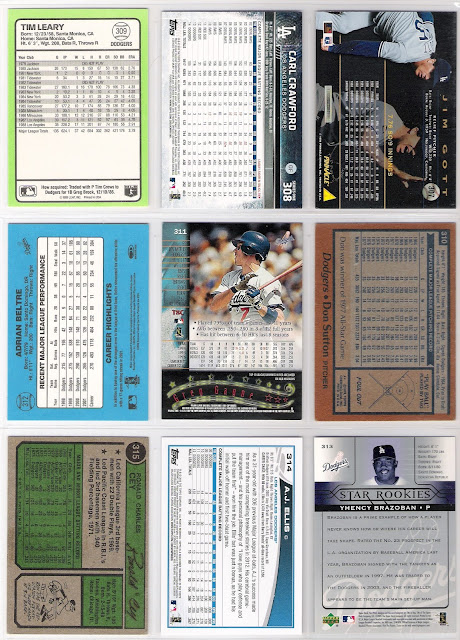 the 1978 topps don sutton card, complete with the all-star shield, was definitely close to a no brainer, but the first card i identified for this sheet was the stadium club gagne since i knew i had a couple of doubles of that particular double play turn.

i like that pinnacle jim gott card. not only does mike piazza make an appearance, but they are opting for the post game high-five rather than the handshake.  you can also see both the tim crews and the roy campanella/don drysdale memorial patches - one on each player's sleeve.  next up is the newest former dodger - carl crawford.  the dodgers designated him for assignment last week, and my guess is that they straight release him. crawford didn't play everyday, but his batting average and obp were right at his career averages (.290/.330) while with the dodgers in 2013 and 2014. 2015 and 2016 were not very good, however, and with the arrival of trayce thompson and scott van slyke coming off the dl, something had to give.

i don't know that tim leary was one of baseball's best back then, but his 1988 performance with the dodgers was a big part of their success. he won 17 games, threw 6 shutouts, won the silver slugger with a .269 batting average (highlighted by a key pinch-hit, walk-off single against the giants), and pitched fantastic relief in game 1 of the world series.  don sutton, on the other hand, was one of baseball's best in 1978, but never could find himself on the winning side of the world series.  the 1978  topps all-star shield is my favorite all-star designation ever, and sutton earned his by starting and winning the 1977 midsummer classic en route to being named its mvp.

greg gagne's 1997 stadium club card features a nice double play turn that works pretty well with the design of the card. i never did follow through on my double play card tournament, but gagne would likely have been a 6 or 7 seed.  2002 donruss originals shows up again, this time riffing on the 1986 design.  adrian beltre deserved rated rookie status in 1999, but donruss wasn't making cards that year.

that brings us to yhency.  not a common name, yhency.  in fact, a quick google search doesn't turn up any other results than yhency brazoban.  yhency filled in for an injured eric gagne at the end of the dodger bullpen in 2005, and elicited exclaims of 'ghame over' - an obvious play on gagne's 'game over' tagline.  jon weisman at dodger thoughts had ghame over t-shirts made, and i purchased one. yhency blew out his elbow and never did return to his previous status.

aj ellis is not really the star of his own card - that would be clayton kershaw who makes an appearance on this 2013 topps card. a few years ago, this would have been a 'classic combination' card from topps.  anyway, ellis has done well for himself to be considered kershaw's catcher, although i noticed that he didn't start behind the plate when kershaw pitched against the giants last week.

ron cey's 1974 topps card is great. it's his first solo card after two years of multi-player rookie cards, and features a photo of cey taking a cut. i'm guessing it was a swing and miss, but it sure looks like the penguin was going for the fences.

i could have used the 2001 topps chrome kirk gibson golden moment card at number 307, but i chose jim gott's high-five instead.  other cards that didn't quite have what it takes include 1992 pinnacle darryl strawberry 'shades' subset 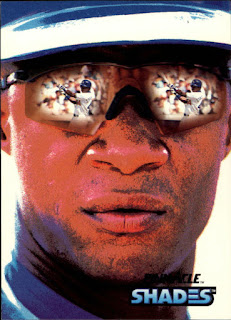 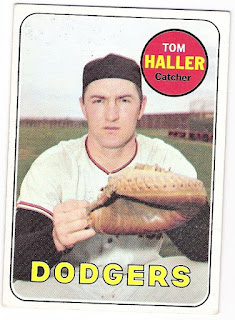 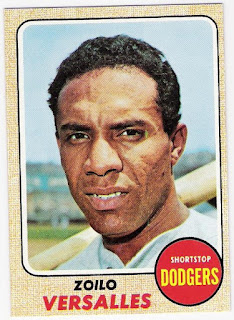 this is where the sutton card wins out over gott, gagne, and cey.

the 2013 topps aj ellis card is an example of the frustrations that topps' overproduction of variations and parallels has wrought.  after they used gatorade baths and at the wall catches as photo variations, i saw some card show dealers tout regular base cards with those types of photos as "sp variation?" to prey, i suspect, on unknowing collectors.  the ellis card is one that i saw with this type of designation as well, due to the natural sparkle coming off of his helmet.  i was almost convinced that it was a 'sparkle' variation until i checked it out at cardboard connection.  caveat emptor, always.
Posted by gcrl at 9:55 AM