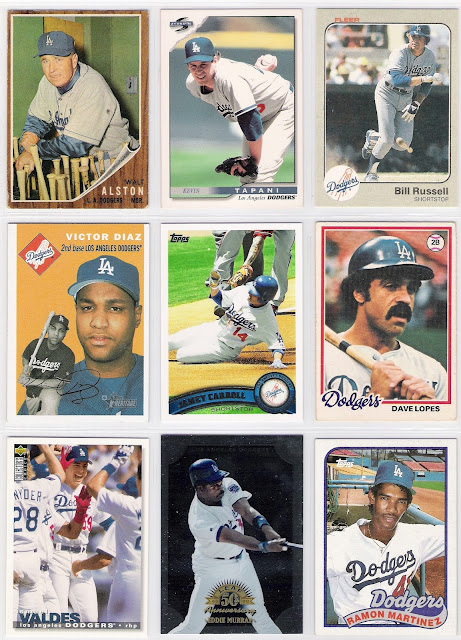 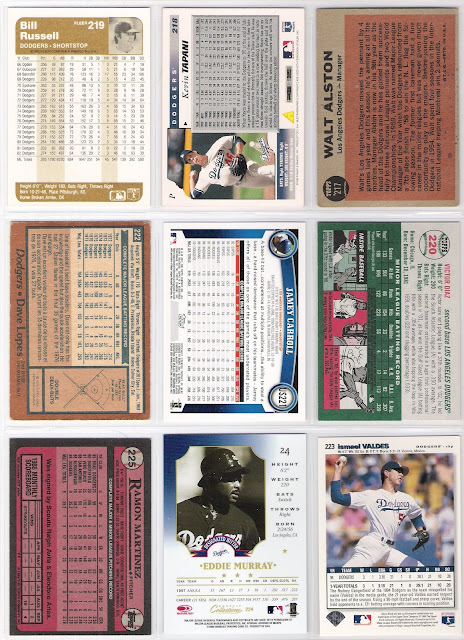 with the dodger stadium backdrop, ramon martinez's rookie card was guaranteed a spot in the set.

alston looks a little bit pained as he leans on the bat rack. not sure if that is the panic button on the wall behind him, but his 1962 dodgers lost six of their last seven games of the season, blowing a 4 game lead over the giants in the process, and then lost two games of the three game playoff against the no-cals to miss out on the pennant.  that team won 102 games, which was the most for an alston led team (later tied by the 1974 pennant winning team). kevin tapani, meanwhile, joined the dodgers for the latter part of the 1995 season and did make the postseason in the process.  he pitched poorly in two appearances against the reds, however, as the dodgers were swept in the nlds.

i love that russell card.  i like to think that he just hit a bomb after the opposing team intentionally walked someone to get to him, and he's glaring into the dugout to make a point. victor diaz never played for the dodgers. he was traded to the mets during the 2003 season for jeromy burnitz and wound up reaching the big leagues with them in 2004.

jamey carroll's 2011 topps update card was a welcome addition to my dodger collection back when it was released.  i think it would have worked better as a horizontal card, however.  did you know that davey lopes really doesn't have any topps dodger cards showing him on the playing field other than his 1976 record breaker that was included on the first sheet of this set, the 1978 topps nlcs card, and his 1982 'in action' card that shows him in a batting stance?  it's pretty much all poses and candid shots for lopes from 1973 through 1982, and his 1978 topps/o-pee-chee card is no exception.  i still like the card though.

ismael valdes looks really happy on his 1995 collector's choice card, but i am concerned that the high five he is about to give/receive will irritate the blisters on his fingers and cause him to miss a start or two.  valdes apparently had fairly fragile skin (seriously) and would often develop blisters.  moises alou had some advice for him, i think.

steady eddie murray was featured in a number of sets in 1998 which was great because he was included (mostly) as a dodger, and all of those cards were final tributes for his hall of fame career that ended in 1997.  this card is sort of a parallel of his regular leaf card.  it may look like it is number 24 (the number of his regular leaf card), but it is really number 224.  you have to look for the other number at the bottom of the back. 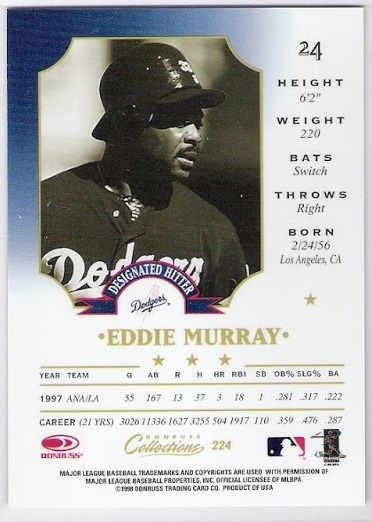 donruss used all of the cards from their various sets in this 'collections' release.  base donruss started at number 1, leaf at 201, elite at 401, and you get the idea.  i have a couple of other cards from this set later on in the frankenset.

last, but not least is ramon martinez's topps rookie card. this card was kind of a big deal in southern california, especially after ramon won 20 games in 1990 as a 22-year old and finished as the runner up to doug drabek in the cy young vote.  with the nice dodger stadium background, i appreciated the card all the more.

even though it is pink and not yellow like most of the other dodgers in the set, carl erskine's 1959 topps card gave way to alston at number 217.  other near misses include 1995 pacific orel hershiser at number 218, 1994 upper deck collector's choice jose offerman 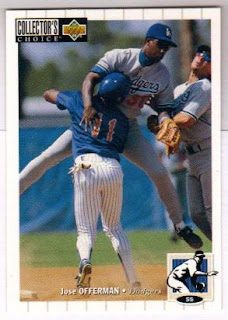 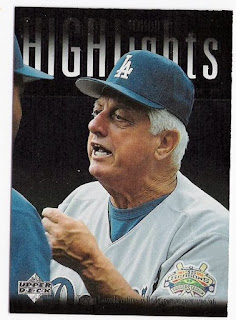 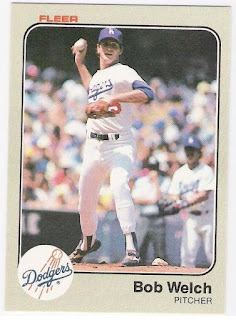 happy ismael valdes and friends in the home whites wins over ropes, lopes, and rookie ramon.

julio urias made his big league debut last night (i am writing this on may 28).  he is the latest dodger pitcher to come from mexico, following vicente romo, jose pena, fernando valenzuela, and valdes among others (like elmer dessens!).  valdes also made his first big league start against the mets (although he had made a number of relief appearances prior to that), and was pulled after giving up back-to-back hits to open the second inning. urias pitched a bit longer, with worse results, but he will be fine. better than fine, in fact.
Posted by gcrl at 9:55 AM