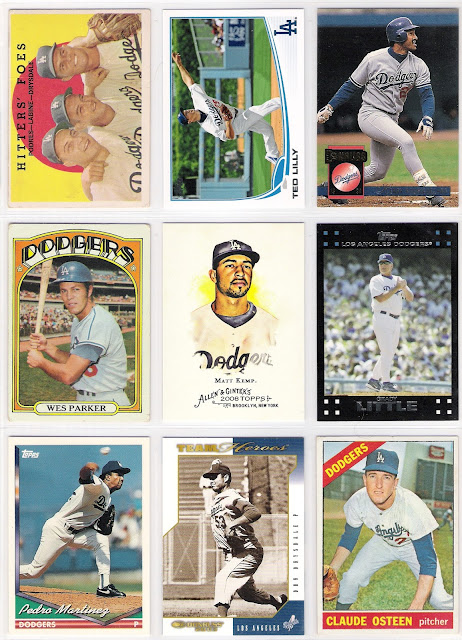 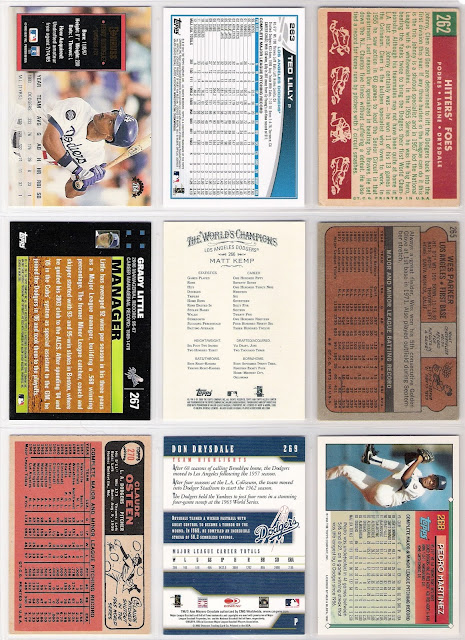 grady little's card is the no brainer for this sheet.  i wanted to get each dodger manager from alston through roberts in the set, and this is little's only card with a number less than 727 (his 2006 upper deck card is number 1106).

the first combo card of the set leads things off. topps had four "foes" cards beginning with "world series batting foes" in 1958, this "hitter's foes" card in 1959, and "friendly foes" in both 1963 and 1964.  none of the three pitchers on the card finished above .500 in 1958, but the back of the card smartly notes that they "were determined to lift the dodgers back into the first division" in 1959, and so they did - all the way to a world series championship.

ted lilly's 2013 topps card is a beaut.  it features a photo from about the same vantage point as the one on pedro martinez's 1994 topps card featured later on the sheet, but the foliage at the back of the visitor bullpen creates a different background.  henry rodriguez's 1994 donruss card may be the least interesting card on the page, but it serves as a reminder that the expos got a couple of good years out of him after being a part-time player with the dodgers.

the 1972 topps wes parker card is not as nice as his 1973 topps card, but it gives us a good look at the dodger jersey's of the day. i am glad that when the dodgers brought piping back to their unis several years ago, they did not include the shoulder piping.  2008 a&g remains the only set of that line that i have completed, although i did complete the 2009 national pride insert set.  kemp's card from the '08 set, while nothing special, is as good as any to represent (except maybe russell martin's).

and now we get to the 2007 topps grady little card, which is followed by the aforementioned pedro card from 1994.  it was fate that brought them together so we can relive the decision by little to leave pedro in game 7 of the 2003 alcs after throwing 120 pitches and allowing a couple of hits in the eighth inning.  that decision cost little his job (pedro gave up a couple more hits to allow the yankees to tie the game, and they won the pennant on aaron boone's 11th inning home run), but also paved the way for terry francona to take over, so i don't think red sox fans should be too upset about it.

another black and white modern day drysdale card - this one from a 2003 donruss release as opposed to the 2002 donruss originals card we saw earlier in the set - and claude osteen's 1966 topps card close out the sheet.  the osteen card is a good example of the slanted world that topps' photo editors live in.

had i not had a double of the 1959 hitter's foes card, i probably would have gone with the 2008 topps heritage hitter's foes (chad billingsley, derek lowe, brad penny) at number 262.  other cards considered but not chosen include 1993 donruss triple play roger mcdowell 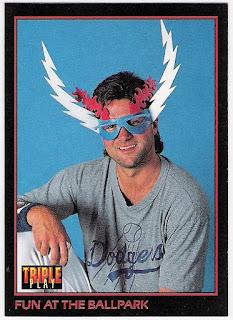 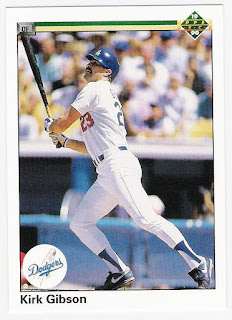 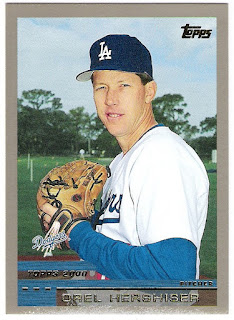 i am a fan of ted lilly's 2013 topps card (i completed the rainbow, in fact), so it should be no surprise that it is my favorite card on this sheet.

don drysdale shows up twice on this sheet - by name, as opposed to walter alston who was visible on the 1964 world series card and had his own card on sheet 16.  this is the first time this has happened in the set.  i mostly tried to avoid it unless circumstances dictated (circumstances being i liked the cards that caused this to happen too much to omit them), and it will happen again.
Posted by gcrl at 9:55 AM