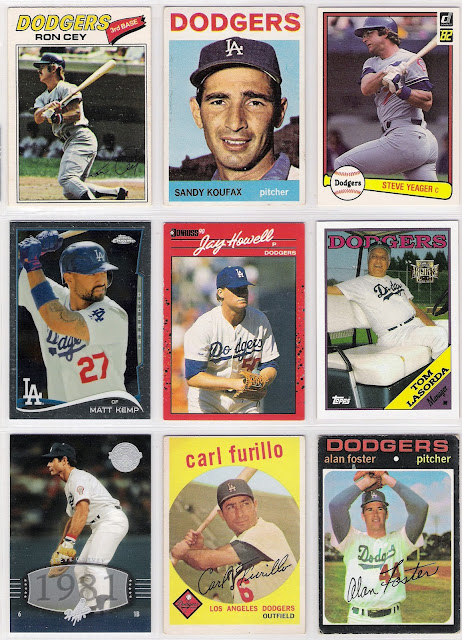 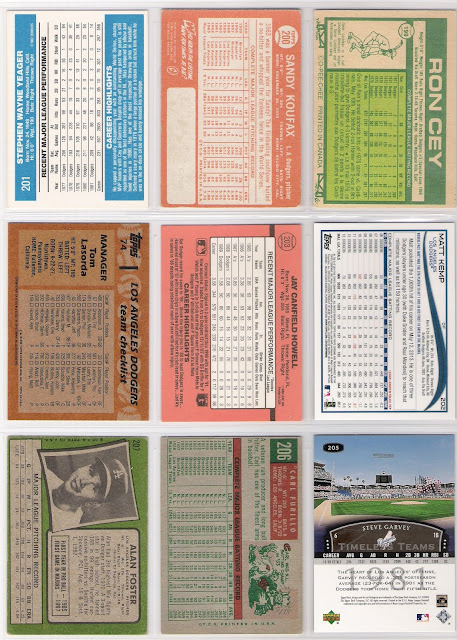 that would be the 2001 archives lasorda card.  his 1988 topps card is one of my top 3 favorite lasorda cards (along with 1992 topps and 1978 topps), but it didn't make the cut earlier in the set.  so, the archives card that reprints the '88 card was a no brainer once the no repeat players/sets guideline expired.

i'm pretty sure that this is the first sheet that includes cards from the 50's, 60's, 70's, 80's, 90's, 00's, and 10's.  and they are all pretty good, too.  leading off with ron cey's 1977 opc card, and following that up with sandy koufax's 1964 topps card? that's a great start.  i thought that the hero numbers should be well represented in this set, and although clayton kershaw's 2013 topps heritage card was also number 200, i decided to go with the original, so to speak. so, i purchased a second '64 koufax for my collection.  and, while i may go back and replace matt kemp at number 100 with hubie brooks (i've got that bowman card in my sportlots cart as i type), sandy won't be going anywhere. 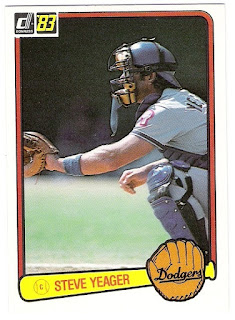 at 201, and i went for yeager at the plate rather than yeager behind it.  the photo is similar to the one on cey's card - so much so that i wonder if the top of the dugout was painted sometime between 1976 and 1981, so that both photos were taken in the same (shea?) stadium.  matt kemp's 2014 topps chrome card features a nice photo with the red number prominently displayed, but it's jay howell's 1990 donruss card that really makes the red pop.

i already mentioned that i like tommy's card, so i'll move on to the garvey from the timeless teams set.  i am a fan of this set to be sure, and this is one of my favorite cards in it because upper deck matched the photo with the year, which is nice.  from one number 6 to another, and from dodger stadium to the la coliseum, we have carl furillo's 1959 topps card. i've seen a few football games at the coliseum, but did not make it to the exhibition game the dodgers played there a few years ago.  i do recall sitting there during the football games trying to imagine it as a baseball stadium and couldn't really figure it out even though i had seen photos of the conversion.  anyway, the rams will be playing there for a couple of years, and i kind of hope the stadium falls apart on them.  this coming from a guy who was a big fan of the rams until they traded vince ferragamo to the bills in '85.  i thought georgia frontiere was a bad owner. that kroenke guy seems like a real jackass.

apologies to alan foster for bringing up kroenke just before getting to his card.  one thing about foster that i find interesting is that he wore number 44 - a number usually identified with sluggers like hank aaron, willie mccovey, and post-oakland reggie jackson.  speaking of sluggers, foster served up the first pitch that willie stargell hit out of dodger stadium (stargell did it twice), although pops wore number 8.

i considered but did not choose a number of cards for this sheet, including 2002 topps 206 paul loduca at number 199, 2013 topps heritage clayton kershaw at number 200, the aforementioned 1983 donruss steve yeager at number 201, 1979 o-pee-chee gary thomasson 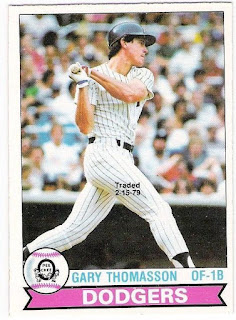 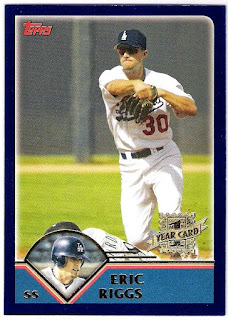 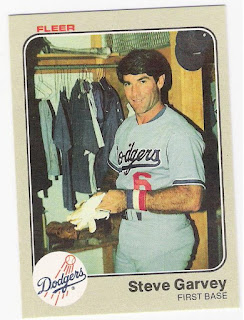 there are a lot of contenders here, but a 1964 topps sandy koufax card - more for the stature than the aesthetic - should and does win out.

back to the uniform number thing - foster was traded to cleveland after the 1970 season, and he took number 32 (now that is a pitcher's number) with the tribe. the dodgers acquired al downing that same offseason, and he (another pitcher) took foster's 44.  about three years later, downing gave up aaron's 715th career home run - from one 44 to another...
Posted by gcrl at 9:55 AM