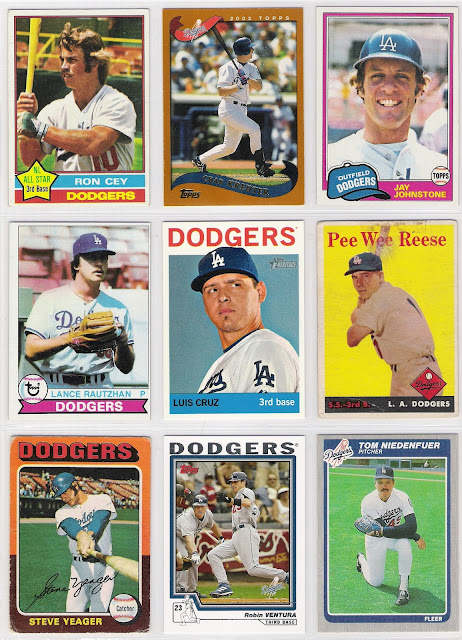 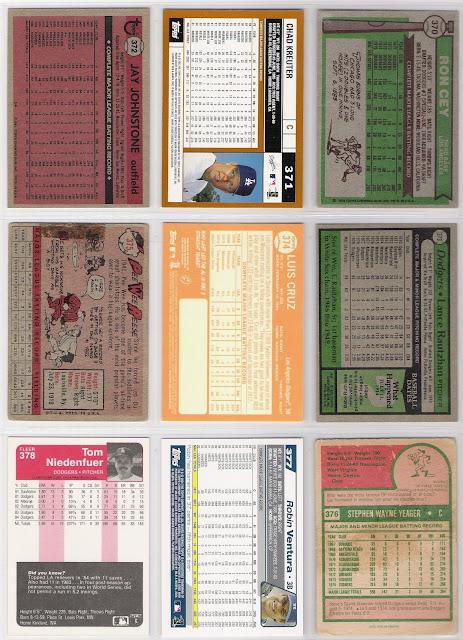 lance rauthzhan had just one solo card as a dodger, and as a member of the team of my youth, his 1979 topps card was guaranteed a spot in the set.

ron cey lets his hat hair shine on his 1976 topps card.  cey was the starting third baseman for the national league in the all-star game for the second year in a row, but the voters would give pete rose the nod in '76.  the dodger voting contingent showed up in 1977, however, and got cey his all-star recognition back in time for the 1978 topps set.

chad kreuter's 2002 topps card reminds me of the time when he went into the stands at wrigley field after a fan stole his hat off of his head.  that happened in 2000, kreuter's first year with the dodgers.

on the other hand, jay johnstone's 1981 topps card reminds me of the time that he hit a pinch-hit home run in game 4 of the 1981 world series to cut the yankees' lead in the game to one and get the dodgers on the path to victory.  johnstone was cut by the team the following may, but he's still a dodger world series hero.

speaking of the postseason, lance rautzhan was the winning pitcher in the 'black friday' game in the 1977 nlcs against the phillies.  i was looking forward to a solo rautzhan card in 1978 following his postseason appearances, but he received a four-in-one rookie card instead.  i was happy to find this card in the 1979 topps release, but by then i had turned my attention to finding a bob welch card instead.  rautzhan passed away earlier this year and i was flattered that jon weisman used the 1978 topps card that i created for his news release on dodgers insider.

luis cruz was part of the crew that tried to hold down third base for the dodgers in 2012.  cruz, coming back to the big leagues after some time in the mexican league, manned the hot corner for the dodgers that year along with adam kennedy and juan uribe, but he also spent time at shortstop.  he hit just under .300 with 20 doubles in a total of 78 games that season, but his 2013 was not as productive and he was released by the club in july. i prefer cruz's 2013 topps flagship card 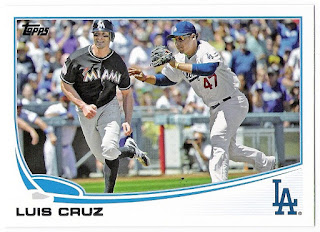 to this heritage card, but only one of them is number 374.

so nice to have a dupe of a vintage pee wee reese card.  and, this 1958 topps card being his final card makes it even better. it's too bad it's not a true final tribute, but topps wasn't into that back then.  i think we can all rest assured that there will be plenty of david ortiz cards in 2017 product.  for now, let's just add a 1959 pee wee reese card to the long list of cards that should have been and hopefully will eventually be made by topps someday.

i had a double of steve yeager's 1975 topps card, but then discovered that i also had a dupe of his 1975 o-pee-chee card, so guess which one made the set? the canadian card even has a stain on the back, no doubt from some backbacon grease or perhaps condensation from an ice cold labbatt's.  i should point out that yeager is also proof that not all folks with 'wayne' as a middle name are bad people.

and now we've arrived at robin ventura's fantastic 2004 topps card. it is one of my favorites from the set, thanks to jeromy burnitz pointing at home plate in the background and the fact that it documents ventura's inside the park home run hit against the braves on august 3, 2003.  i started following ventura's career when he was at oklahoma state thanks to some common ties although i had been aware of him for a couple years before he left for college.  when he joined the dodgers in 2003, i was pleased, but had the distinct feeling that it was too little, too late.  you see, while the dodgers were trying to fill the hole at third base that they created by trading ron cey away earlier in the decade, they passed on ventura in the 1988 draft.  instead, they took bill bene with the 5th pick and let ventura fall to the white sox at 10.  for the record, the dodgers also passed on ed sprague who proved to be a serviceable third baseman for a few seasons and so were left to feature jeff hamilton, mike sharperson, lenny harris, dave hansen, tim wallach, mike blowers, and todd zeile (among others) at third before adrian beltre kind of settled things down.  when ventura made it to la, he wound up playing mostly first base, although he did get to pitch in a game with the dodgers (and i was really hoping for a 'pressed into service' card from topps in series 2 of this year's flagship release). maybe in update? please?

the last card here is tom niedenfuer's 1985 topps card, on which the dodger reliever does a fine job of suttoning.  1985 was not a good year for niedenfuer, at least as far as dodger fans remember, thanks to a couple of pitches in the nlcs, but he set career highs in saves, innings pitched, and strikeouts that season.  i'm not going to harp on niedenfuer for what happened against the cardinals in '85, because i can't really complain about the team winning two world series titles in the 1980's.  i will mention, however, that niedenfuer was only part of the 1981 team - in fact, he was the guy for whom jay johnstone pinch-hit in game 4 against the yankees. 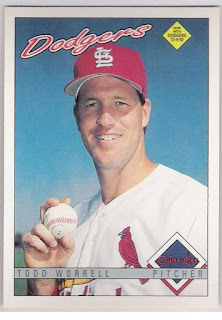 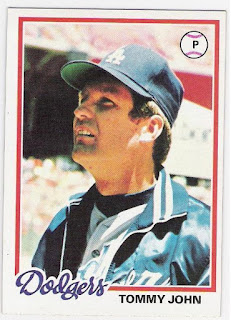 so here's a case where a classic vintage card (reese) trumps a significant dodger card (john) from my favorite set ever.  on a side note, john probably makes the brady bunch page (although his shoulders are turned) in bobby's spot. or maybe mike brady's spot. it depends on whether john is checking out alice or jan.
Posted by gcrl at 9:55 AM