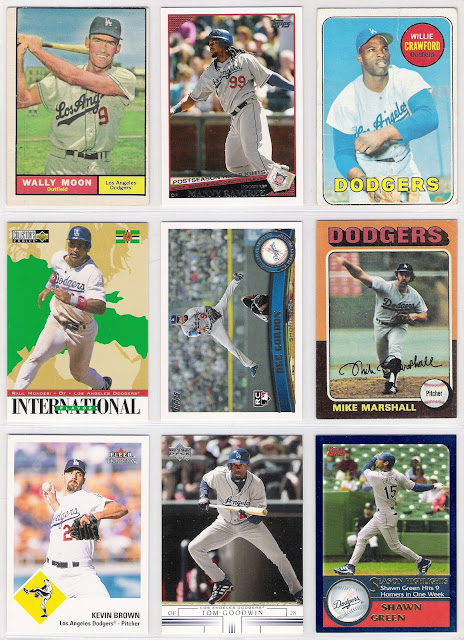 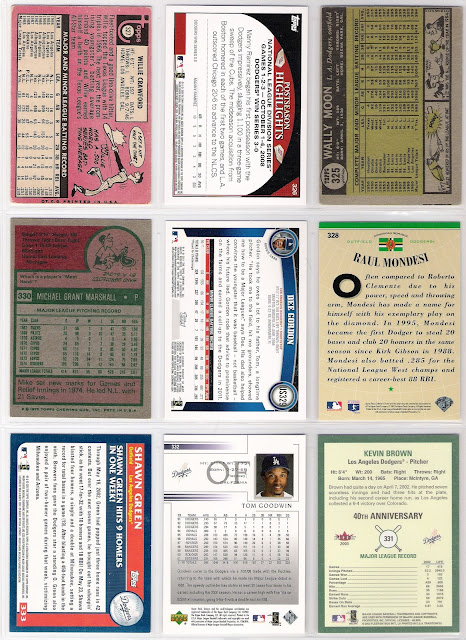 even if he is holding on to the ball, the 2011 topps update dee gordon card is fantastic, and it was going to be in this frankenset.

my blogging sense tells me that the wally moon card is the first 1961 topps card to make the frankenset which is surprising.  i had moon at number 5 in the set with his 1960 topps card before ultimately settling on a 1957 topps sal maglie instead.  both cards give us a good look at the trademark wally moon unibrow, but the 1961 card is, in my opinion, better.

the manny ramirez card here is a postseason highlights card that tells the tale of manny's 1.100 slugging percentage and 2 home runs hit against the cubs in the 2008 nlds.  manny also hit 2 home runs and slugged 1.067 against the phillies in the nlcs, but the dodgers came up short in that series.  manny didn't get to play in a world series with the dodgers, but he did appear in four fall classics - two with the indians and two with the red sox - and hit .243 in those series.  willie crawford's 1969 topps card tells us on the back that willie owned a .500 batting average in the world series at the time of the card's release.  of course, willie had appeared in only one world series at that time (1965), and was 1 for 2 in his plate appearances.  crawford did appear in the 1974 world series with the dodgers and hit .333 with a home run to drop his career fall classic average to .375.

like manny ramirez, raul mondesi hails from the domincan republic, although manny went to high school in new york.  mondesi's collector's choice card here mentions another caribbean ballplayer, roberto clemente, and notes that rauuuuuul was the first dodger to go 20/20 (20 home runs and 20 stolen bases in the same season) since kirk gibson in 1988.  in 1997, mondesi would become the first dodger to join the 30/30 club.

remember when dee gordon was a shortstop? he came up to the dodgers in 2011 and hit .304 and stole 24 bases in 56 games and we got this great card from topps as part of their update set. it's a nice example of the shortstop avoiding a slide as part of a potential double play turn, even though gordon didn't throw the ball to first.  i still include it in my dp collection, and went after the various parallels of this card in earnest.

dr. mike marshall's 1975 topps card was an important one to me as i was completing my dodger team sets in the early 1980's.  it was his first card as a dodger in the sense that he was wearing a dodger uniform (unlike his 1974 topps traded card), and it listed his stats on the back with his all important 106 games pitched in 1974. marshall was featured on two other cards in the 1975 topps set - a record breaker and a league leader - but this card was the one i was most intent on acquiring as soon as i learned that a dodger held the record for most games pitched by a reliever in a single season.

vintage card designs were abundant in 2003 with topps heritage, upper deck vintage, and fleer tradition.  at least fleer used one of their designs (1963 fleer) instead of pulling an upper deck and ripping off the 1965 topps design.  anyway, this particular kevin brown card features a peek at the dodger stadium outfield wall with the 40th anniversary of dodger stadium murals.  i loved the murals.

tom goodwin's 2002 upper deck card may be the least interesting card on the page, but at least that is tom goodwin on the card and not adrian beltre.  shawn green's 2003 topps card here is a season highlights card that addresses his week in may of 2002 when he hit 9 home runs over 7 games.  in the midst of that run was a four-homer game in which he had 2 other hits (a single and a double) for 19 total bases - a major league record.  i've written a few times about the fact that i was there for green's four-homer game, so topps should know that it wasn't just brewer fans that were giving green a standing o after he hit his fourth home run.

there were still many options for these spots in the frankenset, and some of the runners-up include 1993 score select pedro astacio at number 325, 1993 donruss pedro martinez at number 326, 1982 donruss davey lopes 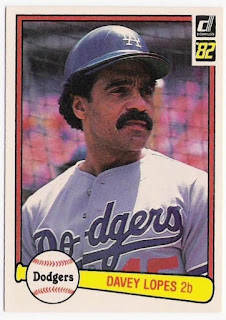 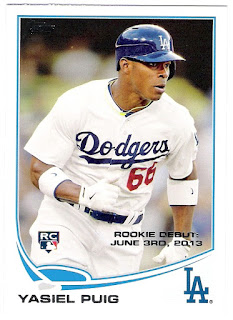 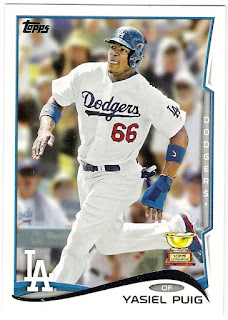 i would like the shawn green card more if it were specifically about the 4-home run game, so i'll stick with dee gordon as my favorite card on the page.

i was also at the dodger/brewer game the night before green's four-homer game.  it was green's rbi triple in the third inning that produced that game's only run.  hideo nomo pitched well, and eric gagne closed things out on a throwback uniform night in which the brewers wore them but the dodgers did not.  i'm guessing that's because their road unis in 2002 were pretty close to what they wore in the early 1960's design wise, as you can tell by comparing the goodwin and moon cards above.
Posted by gcrl at 9:55 AM