it's all over but the shouting.  without further ado, let's see some dodger cards. 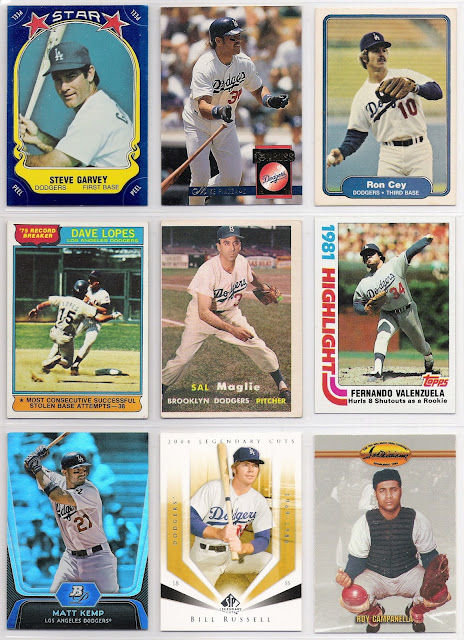 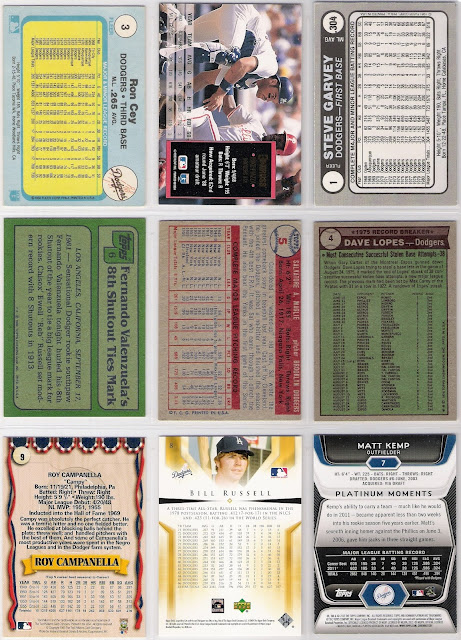 the "no-brainer" of the day:

come on. i had to get steve garvey, ron cey, bill russell, and davey lopes on the first page of the set.  i knew that garvey, cey, and lopes all had cards that would fit, but wasn't sure about russell.  i was very happy to see that legendary cuts card numbered at 8!

this sheet is a good one - it's got the four infielders from the team of my youth, plus fernando, piazza, and matt kemp, who at one time was my favorite dodger.  add in roy campanella and a card from the 1957 topps set (the first year of the now-standard card size and the last year of the brooklyn dodgers), and we have a pretty good opening act.

i knew going in that these low numbers would result in either a league leader or record breaker/highlight card or two, and so it is no surprise to have two such cards here.  it's a little bit funny this feeling inside to have a sticker as the first card in the set, but that's how it shook out.  i didn't have a double of the first card of garvey's 1984 star set, and that may be the only other time he's card number 1 as a dodger.

this early in the game, there are a lot of options.  the spot i struggled the most with was card number 5.  at one point, i had a 1960 topps wally moon in that spot, but i also had charlie neal's 1960 topps card in the set within the first 20 pages, so i wanted to switch one of them out to maintain the diversity of the first 180 cards. maglie's 1957 topps card was the obvious choice as the '57 set was not yet represented due to the fact that any doubles i had were in my set binder (yes, i am trying to complete the 1957 topps set). i picked up a third copy of the maglie card, and here he is.  without it, the 1957 set would not have been represented in the frankenset.

there were also a few options for the number one spot, not including the dodgers' most famous number one card (that of andy pafko in the 1952 topps set which was disqualified due to the size of the card and the fact that i do not own one, let alone two).  i could have chosen from tommy davis' 1963 topps league leader card, dusty baker's 1982 fleer card, fernando's 1983 donruss diamond king card, mike piazza's 1994 topps card, or clayton kershaw's 2015 bowman, just to name a few.  however, putting steve garvey at the beginning of this set was a must for me.

finally, as happy as i was to see russell with a card numbered 8 in a set, that meant it had to bump one of the cards that otherwise was a shoo-in here.  the 1965 topps set has as its number 8 card the national league era leaders card of sandy koufax and don drysdale.  as i began putting this frankenset together, i had in my mind several cards that i thought would have to be in the set, and that was one of them.  in the end, however, i decided i wanted the infielders on the first sheet, and so drysdale and koufax will need to be represented by other cards.

i think i'll just say that i am happy to have the infield all together on the first page of the frankenset and leave it at that.

there were a couple of late options for the set at number 7. both corey seager (2016 topps gypsy queen) and kenta maeda (2016 topps now) 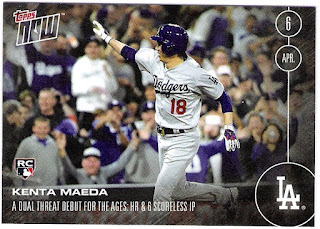 clocked in at the yeager/mantle spot, but until i have doubles (i don't have the seager card yet, and i only ordered one of the maeda cards), kemp will stay on this inaugural sheet of my frankenset.

another card that could have slotted in at number 7, but was never under any serious consideration, is the 1993 hostess darryl strawberry card.  i have a few doubles of that card, but it is pretty nondescript, and darryl appears in the set in a few pages. however, i do have a story about that card.  i was traveling for work recently, and found myself at a charlotte knights game. the knights are the aaa team for the white sox, so naturally, darryl strawberry was there signing autographs.  i usually research the baseball situation in any town i travel to ahead of time, but i did not do so prior to this trip.  so, i found myself standing in line with nothing for darryl to sign.  i noticed a couple of guys with multiple cards and wound up spending too much for a 1993 hostess card of which i had doubles back at home.  anyway, that's what i got signed. 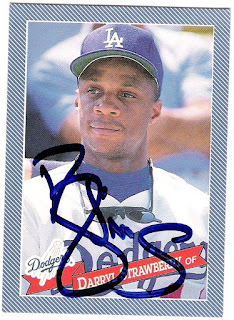 i really wish those guys had had a copy of his 1992 topps card on them.

i recognize that the subject matter of this blog is extremely narrow, and so i don't anticipate a lot of reaction. still, i appreciate those who have mentioned the blog on their sites and those who do take some time to read these posts. as i was assembling this frankenset (one of the many things i did after ending my run at garvey cey russell lopes), i realized i didn't have anyone to share it with. that's why i'm here - to share this set with anyone who is interested - which is the same reason i think so many of us blog - to share our collections and write about what makes them unique.  so, thanks.
Posted by gcrl at 9:55 AM