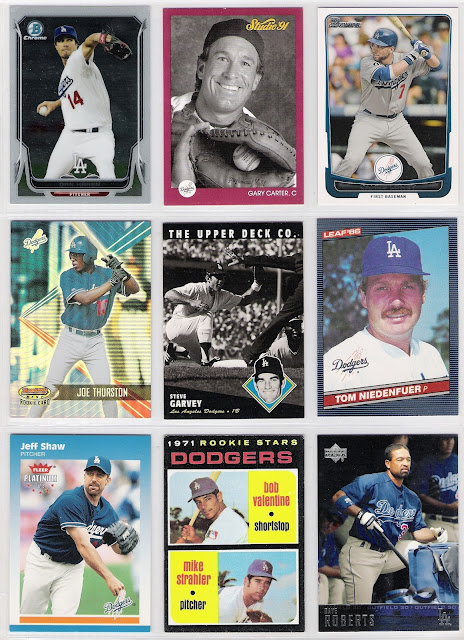 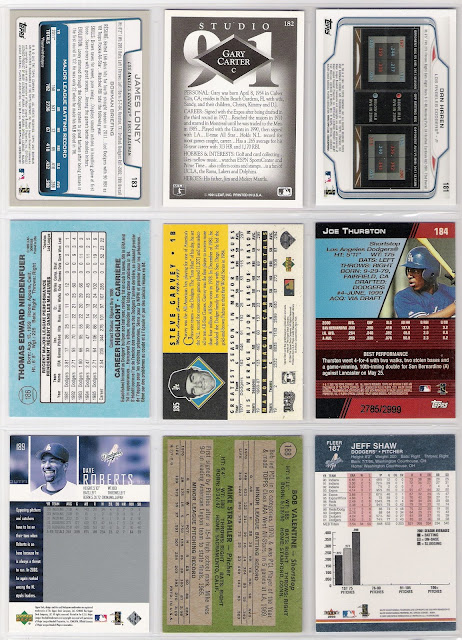 of all of these cards, the 1971 topps valentine/strahler card was the one that slotted in on this page first.  maybe not a true no brainer, but everything else here fit in around it. still, it was enough of a no brainer to block a different jeff shaw card from the set - more on that below.

three bowman cards and a studio card start the sheet off.  i wonder what drives the decision for card manufacturers to use either the interlocking 'la' logo versus the flying ball logo.  anyway, i don't care for the logo placement on haren's card, and if you were to remove the logo from carter's studio card, you would see that it is a card that panini could (and does) make today.

loney and thurston strike similar poses, while upper deck gave me a new steve garvey card in 1994 using a photo from the 1974 world series.  i was pretty happy when i found out about this set, which happened later in the decade. i am glad that the inset photo they used was also a dodger photo instead of a padre photo - upper deck pulled that kind of swap on a few cards, such as manny mota's and charlie neal's.

being a leaf card rather than a donruss card doesn't make tom niedenfuer's card any more interesting.  i will once again take a moment to tell the tale of perhaps my favorite letter to the editor ever.  it must have been in 1985 when some fine person wrote a poem to the la times' sports editor that went something like this:  "i am a true blue dodger fan, so i won't be naming names. but there is a certain pitcher, we niedenfuer games." genius.

jeff shaw's 2002 fleer platinum card is obviously from a 'heritage' type set that honors the 1987 fleer design.  not sure why fleer put the orange bar on the bottom (dodger cards in 1987 had a darker blue bar).  the orange makes it look like a padre card.  next up is the first multi-player rookie card in the set. both strahler and valentine would be sent to the angels with frank robinson a couple years after this card came out.

last, but not least, is a card of the current dodger manager, dave roberts. i am not a fan of the blue jerseys as game jerseys (even though i own one), but i do like roberts' card.  also, from 2002-2005, i was only buying topps stuff, so upper deck cards from that timeframe are relatively new and interesting to me.

some of the cards considered but not chosen for this sheet include 2009 upper deck o-pee-chee cory wade at number 181, 1971 o-pee-chee al downing 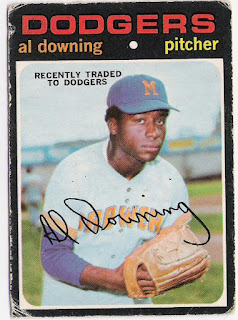 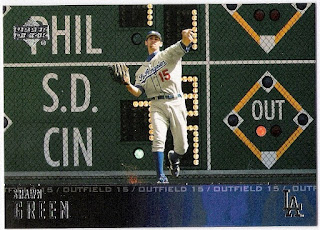 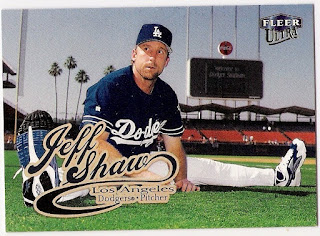 at number 188 (that is a great card, but the valentine/strahler card held its own), 2003 upper deck dave roberts at number 189 (yes, roberts, green, and ashby all held the same numbers in two consecutive upper deck flagship sets).

just to be a bit unpredictable, i won't choose the garvey card (it's nice, but fairly dark). the thurston is a cool looking card, but my favorite here is the dave roberts card.  i chose his 2004 card over his 2003 card for this spot because of its blue-ness despite my aversion to the blue jerseys as mentioned above.

chances were pretty good that i was going to have to repeat a set or player at 185, so i figured it might as well be my baseball hero, steve garvey, who had the honors.  i could have gone with a 2015 bowman chrome mini erisbel arruebarrena card there, but i didn't have a double, and limiting the card selection for the first 20 pages seemed like a nice number to stop on.
Posted by gcrl at 9:55 AM