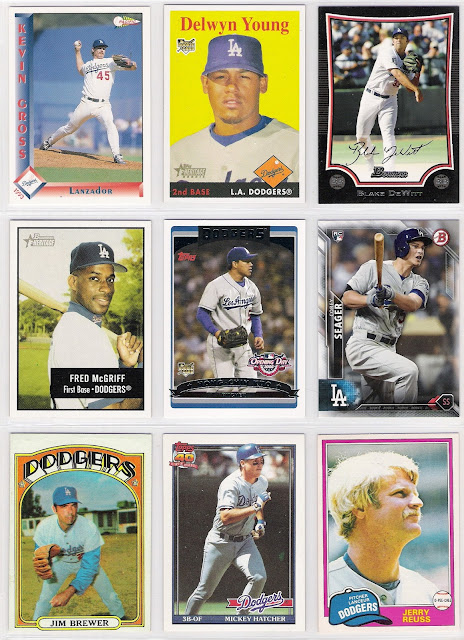 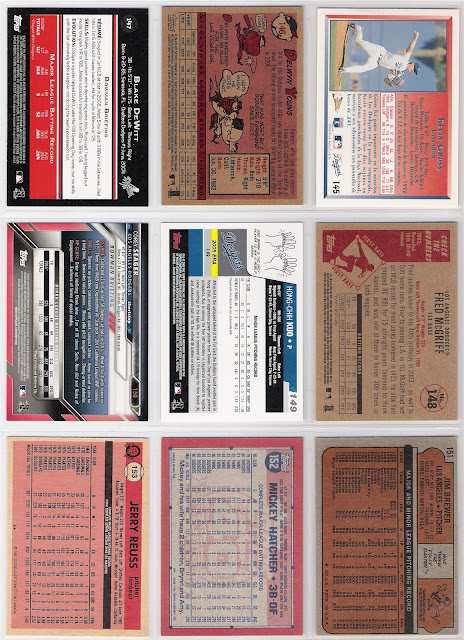 here's how the page originally looked: 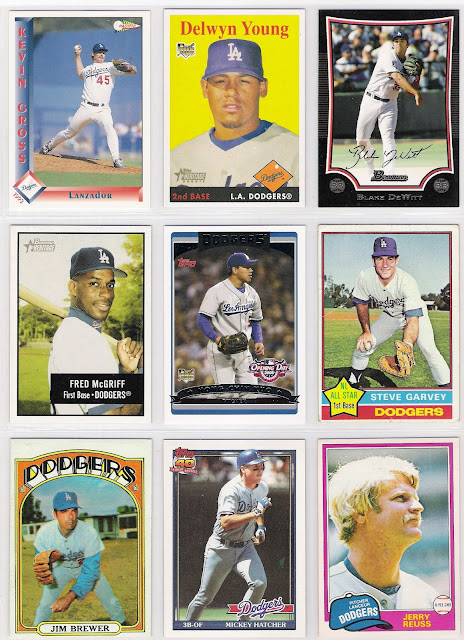 the card that probably comes closest is the jim brewer card.  i have several 1972 topps jim brewer cards for some reason, so he was an early pick to represent that set as i was piecing this project together.

the pacific card comes from their first foray into the bilingual card market, and is nowhere near as crazy as their designs would get later in the decade.  delwyn (not delmon) young came up to the dodgers around the same time as matt kemp and andre ethier.  his cause wasn't helped by ned picking up the likes of juan pierre, luis gonzalez, and andruw jones to patrol the outfield, and he was always the odd man out. he was dealt to the pirates in 2009.

blake dewitt was another guy who had some time with the dodgers, including a decent rookie season in 2008, but again, ned went out and picked up casey blake. dewitt was dealt to the cubs in 2010.  it wasn't ned, but dan evans who was the gm that brought in fred mcgriff for the 2003 season to replace eric karros who was going to chicago to replace (along with future dodger hee seop choi) mcgriff.  the crime dog had hit 30 homers the year before, but managed only 13 as a dodger.  i was looking forward to some cards of mcgriff in dodger blue, and this bowman heritage card was one of the first that i saw.

three of the last five cards on the sheet belong to lefty pitchers. hong-chih kuo's 2006 opening day card is interesting because he was a non-closer reliever even at that point in his career, and i was surprised that he made the opening day checklist, as that set is smaller than flagship.  the other two leftys are former dodger closer jim brewer on a 1972 topps card, and friend of the blogosphere jerry reuss on his 1981 o-pee-chee card.  brewer was done pitching by the time i started to follow the game, but reuss has provided me with some great memories including his no-hitter against the giants and his great pitching performances in the 1981 postseason against the astros and yankees.  it felt right to use a 1981 card for him.

the other two cards on the sheet are corey seager's 2016 bowman card steve garvey's 1976 topps card (which gets the hero number exemption from my lack of set/player duplication rule) and mickey hatcher's 1991 topps card.  i was pretty happy to see seager's bowman card come out as number 150.  this way, the diversity of the set is maintained, and i get seager in the set.  he looks like he will be the real deal, and i hope that he and joc pederson and julio urias and clayton kershaw and jose deleon have many successful years together with the dodgers.

there were lots of good options at number 145, including 1968 topps don drysdale, 1971 topps bill singer, and 1978 topps rick monday (the card where he's wiping the mustard away from his mouth). 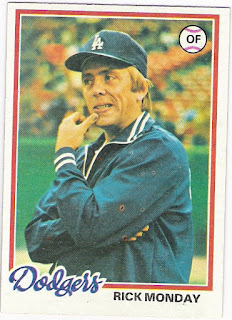 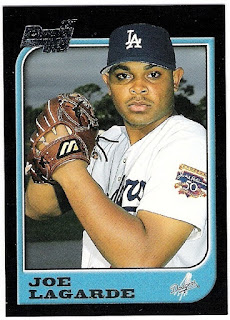 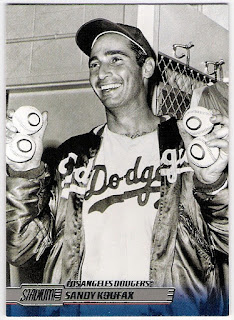 i'll exclude garvey from contention and pick the kevin gross card.  it features an often used photo angle, but i never tire of seeing the visitor's bullpen fence in the background of a card.

just like with the hero exemption at 100, i have rethought the exemption at 150.  with corey seager's 2016 bowman card at number 150, he has replaced the 1976 garvey there just as the 1990 bowman hubie brooks card has replaced the matt kemp card at 100.  after making those swaps, the frankenset is truly diverse through the first 20 pages.
Posted by gcrl at 9:55 AM