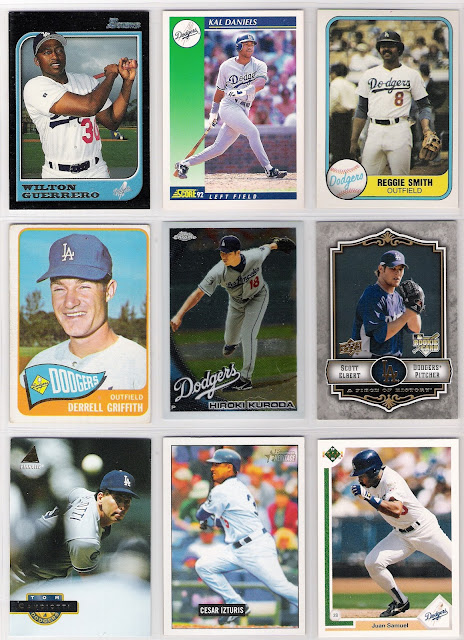 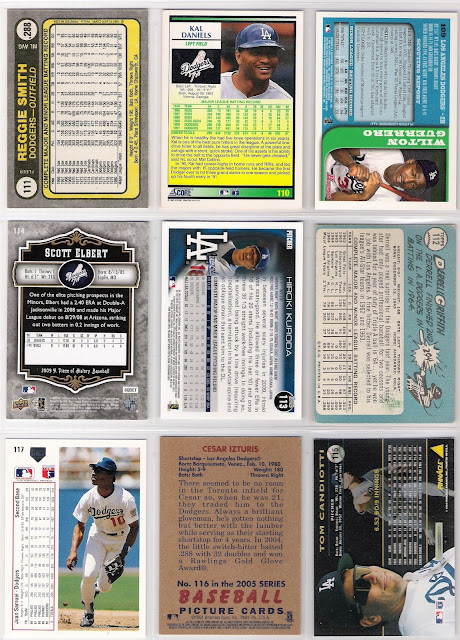 i don't have too many doubles from 1965 as i am working on the set (at least, i have a want list), so this sheet was built around darrell griffith.

this sheet starts with a bang with that wilton guerrero card.  1997 bowman is probably my favorite bowman set - i had the nomo card from the set in my garvey cey russell lopes header.  to go from there to 1992 score is a bit of a letdown, but reggie smith picks things back up with his 1981 fleer card, and it is difficult to not like the 1965 topps design.  even if the card i chose features a guy who kind of looks like robin williams in his photo.

i have a few cards from 2010 topps chrome that look like the final layer of shellack wasn't applied, and the kuroda here is one of them.  the surface of the card is a bit rough.  maybe it's a super short print parallel version. scott elbert was the dodgers' first round pick in 2004, and he was pretty good out of the bullpen in 2011 and 2012.  then he got hurt, returned and did well again in a few games in 2014, but was signed and released by the padres in 2015.

the bottom row of cards is pretty nice.  i reaaaaaaally like the candiotti card with the tight shot from behind the plate, but i also think that 2005 bowman heritage is a underappreciated set.  which is to say, i've never seen it appreciated, and the izturis card deserves some appreciation.  even the photo choice for juan samuel's card makes me like 1991 upper deck more. 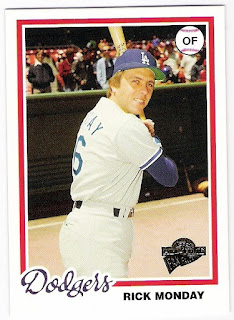 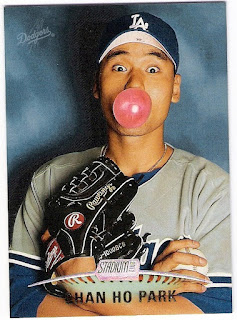 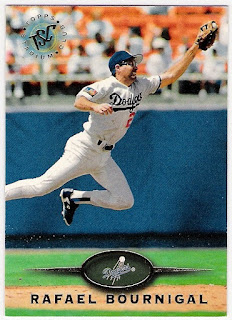 there are a few cards here that i really like for one reason or another, but candiott's 1994 pinnacle card is my favorite of the bunch.

the darrell griffith card brings some orange to the page, along with the baby blue banner. it's interesting to me to see cards from 1965, 1981, and 1997 all use baby blue as an accent for dodger cards (in the case of the 1997 bowman set, they used baby blue for all of the rookies and red for veterans).  it's better than pink, though.
Posted by gcrl at 9:55 AM