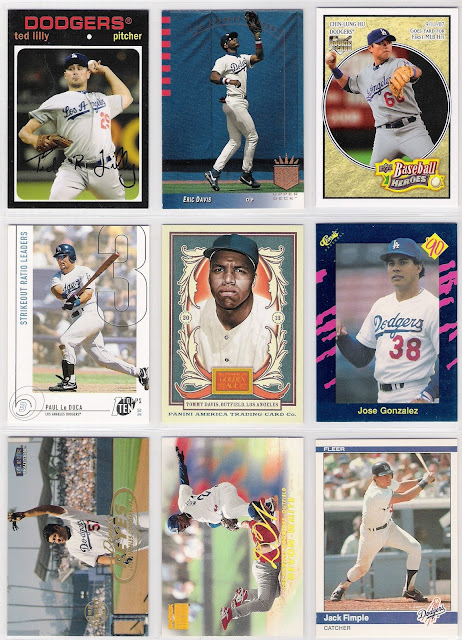 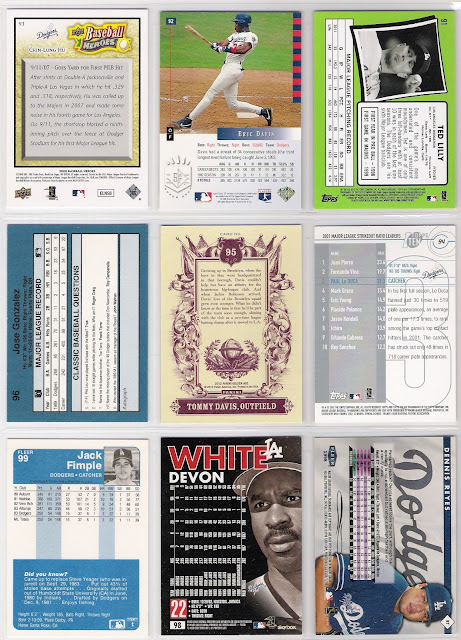 given the way 1993 upper deck sp is numbered, and knowing that most of the other dodgers in that set were already included in the frankenset, the eric davis card was the no-brainer here.  i like '93 sp because it features a number of photos from dodger stadium, and i definitely wanted to include it in the monster.

it would have been nice to have a 1971 topps card on the same sheet as the lilly, but it didn't work out.  i am a bigger fan of davis's 1993 upper deck card than the one here, but this one is nice, too.  the other one shows up in about 50 pages from now.

chin-lung hu had a ridiculous number of cards.  he was the billy ashley of 2008 as far as dodger collectors were concerned.  well, this dodger collector anyway.  the 2002 topps ten set that paul loduca is representing may have been a result of topps wanting to eliminate league leader cards from the flagship where they belong and instead make them into a whole separate set of cards.  no surprise that there was not a 2003 topps ten set.

i was happy to see tommy davis on the checklist for 2013 panini golden age.  he sure traveled around during his career, but he remains the last dodger to lead the league in batting average.  jose gonzalez shows up in the zubaz set while dennis reyes signals for the peanut vendor on his 1998 fleer tradition card.  i really like that card - i like any card that shows the pavilion roofs and even just the trunks of the three sisters out in left field.

some spring training devon white action on a 1999 skybox premium card, and jack fimple bringing us the 1984 fleer set round out the sheet.  for me, 1984 is the best of the fleer flagship sets, and i don't believe i could be convinced otherwise.

some of the highlights among the cards that could have been on this page include a 1973 topps or o-pee-chee team card or a 2008 topps stadium club jackie robinson card (#91), a 2007 fleer ultra nomar garciaparra 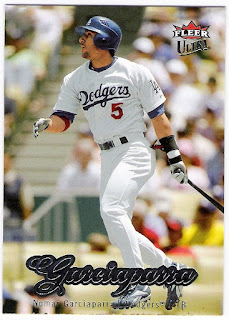 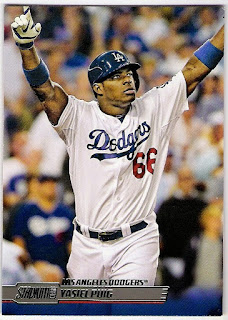 i am a sucker for dodger stadium shots, and dennis reyes' card has the best dodger stadium background on the sheet.  it's my favorite from today's contestants.

sets like the aforementioned '93 sp release and fleer make this endeavor more difficult than i would have liked.  putting the teams in sequential number order really handcuffed me in these early pages.  yes, i know that my rule of not repeating a set or player in the first 180 cards of the set (with the two exceptions of cards 100 and 150) was self-imposed, but figuring out which fleer card to use where was tough. here we have jack fimple representing 1984 fleer which works out ok as fimple has only a few other dodger cards.

also, i think this is the first time that two players with the same last name (eric and tommy davis - no relation) show up on a sheet together.  it kind of screws with the post labels.  maybe i should have done full names...
Posted by gcrl at 9:55 AM