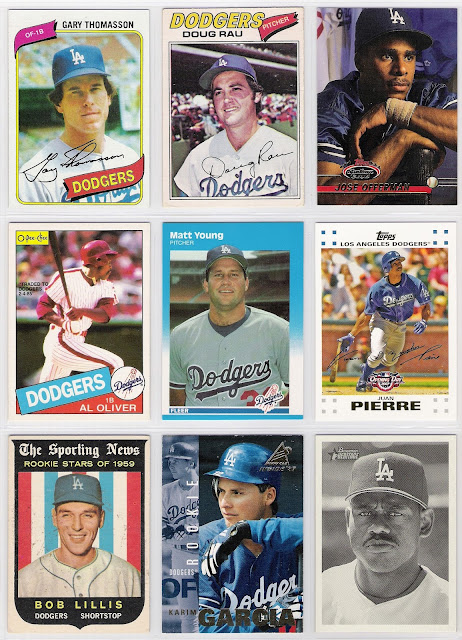 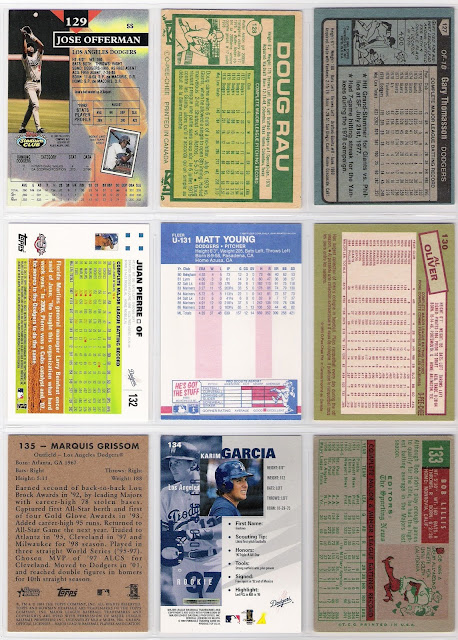 the 1985 o-pee-chee al oliver card was not going to be denied entry into this set. i specifically passed up his 1985 fleer update and 1985 topps traded cards so that this card could make it here on this page.

the 1980 topps card is thomasson's first card with him in a dodger uniform.  he received a nice o-pee-chee variation in 1979, which served as a nice counterbalance to tommy john's variation in the same set.  thomasson would get cards from all 3 manufacturers in 1981, although he was already playing in japan at that point.

speaking of o-pee-chee, we have a couple of the canadian cards on this sheet.  first up is doug rau, whose card is one of those ever so slight photo-cropping and facsimile autograph placement variations.  rau may be best known for trying to convince tommy lasorda to leave him in game 4 of the 1977 world series to pitch to graig nettles after he gave up 3 consecutive hits to start the yankees' half of the second inning.  it's pretty good conversation.  the second o-pee-chee card on the sheet is a much more noticeable variation - it's the good ol' team and text variation for al oliver, who was one of my favorite dodger acquisitions of the mid 80's.  it's too bad he didn't stick around very long.

in between those two canadian cards we have jose offerman.  i am guessing that tommy laid into offerman once or twice, too, as his 1993 stadium club card has him looking like he's been in tommy's doghouse for a while.  matt young was a lefty reliever who was acquired by the dodgers prior to the 1987 season for another lefty reliever (dennis powell). i think the shine was off the traded and update sets by the time 1987 rolled around, but i was still happy to see young and ralph bryant and the others in the sets.

juan pierre's 2007 topps opening day card is just an awful example of photoshopping.  topps did a decent job with nomar's od card a year earlier, but leaving the blue jersey on pierre (he was a cub in 2006) just doesn't work.  bob lillis and the rest of the rookies in the 1959 topps set may be part of the greatest rookie subset design ever. i prefer these to the 1960 version with the big rookie cup, as well as the rookie parade and all the other multi-player rookie cards that came after.

karim garcia's rookie card from 1997 pinnacle inside looks just like the other cards from the set, with the word 'rookie' added to it. which is ok, it's just not 1959 topps. and, bringing up the rear of the sheet, is the black and white marquis grissom card from 2001 bowman heritage.  i am not a fan of the 1953 bowman black & white set, so i am not a fan of this set, either. part of the problem is the plain front.  black and white photos work on cards sometimes, but not with such a plain design. and not on 1979 topps rookie cards, either.  and what did kids think back in 1953 when they say the beauty of the bowman color set and then opened some black and white stuff.  spoke filler for sure.

rudy law's 1981 topps card almost made the cut at number 127, while bill russell's 1978 topps card was denied at #128.  i almost made an exception for 1978 topps cards, but in the end decided to stick to my effort at diversity in the first 20 pages (with only the hero number exceptions).  at #129 (which is the number of tommy john's aforementioned 1979 o-pee-chee card), i thought about using a different jose offerman card (1993 score) or a 2014 topps stadium club hanley ramirez card.  ron cey's 1978 o-pee-chee card was at one point under serious consideration at number 130, and at number 131, we very nearly saw the ray lamb/bob stinson 1970 topps card 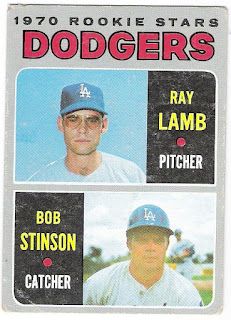 instead of matt young. i don't have a 1994 topps archives the ultimate 1954 set tom lasorda reprint, but if i were to have doubles, that card would probably have been at number 132, with a different card in lasorda's earlier spot.  i also thought about using juan pierre's 2009 topps card there, 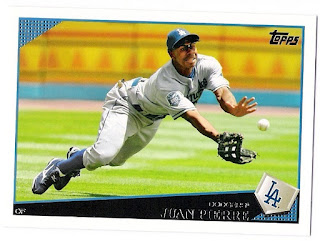 but the photoshopping on his 2007 opening day card is just so bad that it needed to be a part of the set.  number 133 almost had a 1993 upper deck ramon martinez beat out the lillis card, and alex cora's 2004 topps card 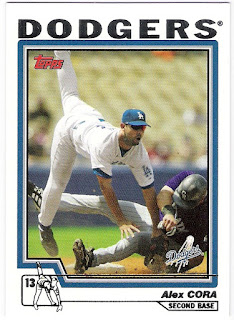 almost beat out karim garcia at number 134.  finally, number 135 could have been a 1980 topps dusty baker or a 1994 upper deck collector's choice orel hershiser card instead of the grissom had i not tried to adhere to my guidelines.

it's al oliver, of course, but bob lillis comes in a close second.  tough to beat the o-pee-chee variation, especially from as colorful a set as 1985 topps.

in 1979, the dodgers had on their roster doug rau and lance rautzhan, as well as gary thomasson and derrel thomas.  i know there was at least one time that rautzhan relieved rau (in 1978), but i don't know if thomasson ever pinch hit for thomas.
Posted by gcrl at 9:55 AM