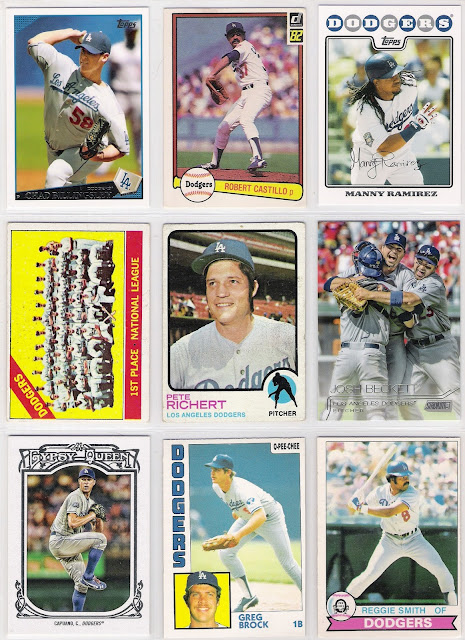 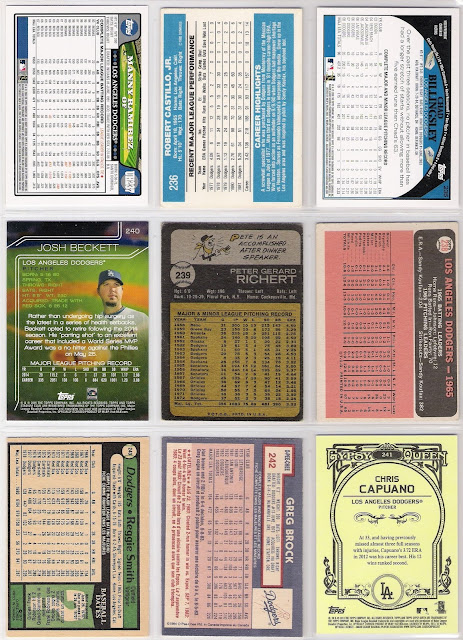 the manny ramirez card from 2008 topps update was perhaps the card i've most highly anticipated since the first steve garvey relic card was finally made.  card companies started putting relics in packs in 1997, but it took them until 2001 to make one of the garv.  with manny's hot start to his dodger career, i couldn't wait to get an official card of him in dodger blue.  as a result, his card was not going to be held out of this set.

that 2009 topps chad billingsley card comes from a time when i was pretty excited about the dodgers and bills.  the dodgers had made it to the nlcs for the first time since 1988 the previous season, and bills was coming off of a 16-win season in which he pitched 200+ innings and had 200+ strikeouts. he started the 2009 season well, and was 9-4 at the break, but faltered in the second half.  three years later, in august of 2012, i was at the game in which he was injured.  he made only two more appearances as a dodger, both in 2013, before missing all of 2014 and moving on to the phillies last year.

bobby castillo's 1982 donruss card confused me. it's got a great shot of castillo in dodger stadium, but he is referred to as "robert" on the front.  while fleer used "robert" on both their 1981 and 1982 cards of the dodger reliever, he was correctly referred to as "bobby" on the front of his 1981 donruss card (topps used "bobby" in 1979 and every year that he had a topps card thereafter) but for some reason donruss changed things up. i had never heard vin scully or jerry doggett or ross porter refer to him as robert, so i didn't understand why the change was made.  donruss eventually went back to "bobby" in 1984.

as i mentioned above, i was anxiously awaiting the 2008 topps update manny ramirez card, and wasn't disappointed.  i was, however, disappointed that upper deck scrapped their plans for an update set, even after releasing a mock-up of the manny card.

while bills and manny and the others couldn't get the dodgers to the world series in 2008, the 1965 dodgers won it all.  their 1966 topps team card only gave them props for being the national league champions, however.  i am not sure why they weren't listed as world series champions.  pete richert had been with the dodgers in 1963 when they won the world series (he didn't pitch in the series that year), but was traded away prior to the 1965 season in the claude osteen deal.  he was on his second term with the dodgers when the 1973 card was issued, but they traded him away again prior to the 1974 season and another world series berth.  luckily for richert, he spent some time with the orioles in between his dodger stints and won a ring with the o's in 1970.

josh beckett was the mvp of the 2003 world series, but that's not relevant.  his 2015 topps stadium club card is relevant because it is the only card on the sheet that doesn't have white borders.  more importantly, it serves as a final tribute for the hurler, and it also features a photo from the celebration of his no-hitter thrown on may 25, 2014 against the phillies.

the chris capuano card is another one of the three parallels that made the set (there has been a walmart black andruw jones card shown already, with another walmart parallel yet to come). i had a double of his white framed retail exclusive card, but not his base card. go figure.

the sheet finishes up with a pair of o-pee-chee cards - greg brock from 1984 and reggie smith from 1979.  neither are variations, but the bright cardstock, french on the back, and especially the logo on the 1979 card bring variety to the set nonetheless. 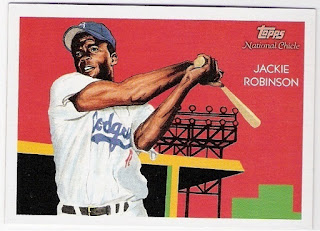 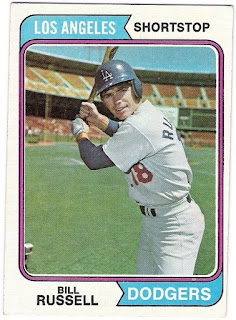 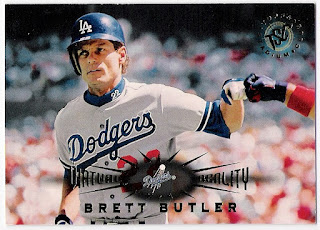 as much as i like manny's card and o-pee-chee in general, that josh beckett card is my favorite on this sheet.

i suppose the silver lining to the 1966 topps card not listing the dodgers as world champions is that topps remained consistent and did not list the giants as champs on their 2015 topps heritage team card either. whomever wins the title in 2018 should get a team card (similar to the 1970 mets card) hailing them as world champions in 2019 heritage.
Posted by gcrl at 9:55 AM