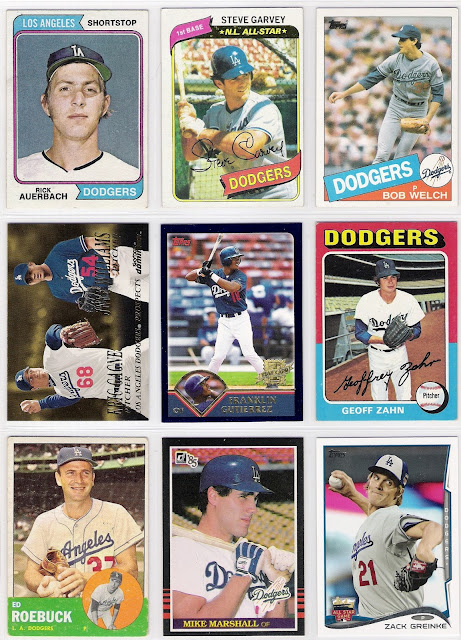 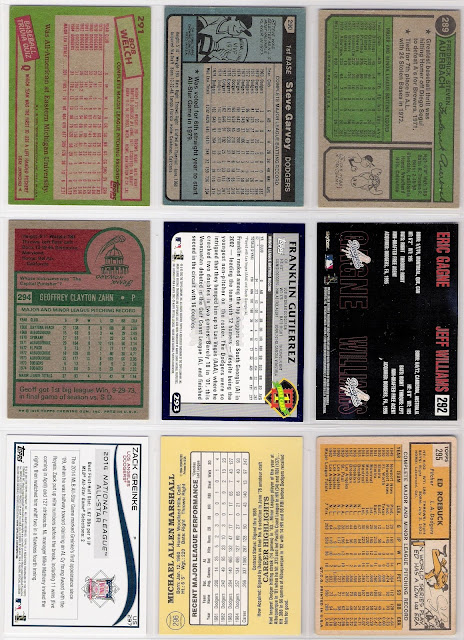 it was the last card added to the sheet, but in hindsight it should have been the first.  that would be the 2003 topps franklin gutierrez card. i'll explain below. 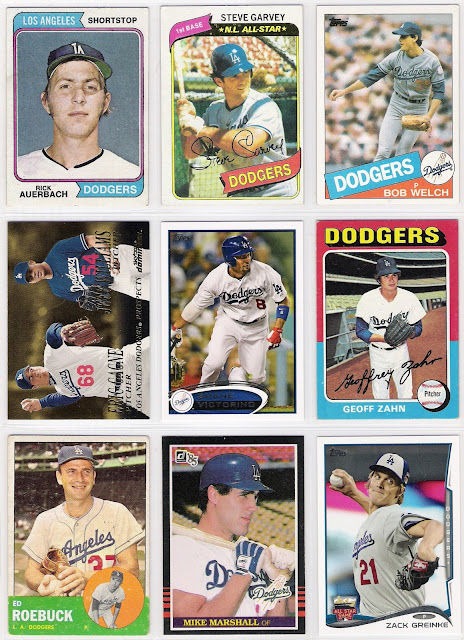 at first, shane victorino's 2012 topps update card made the cut at 293, but i wasn't happy about it. victorino is on my short list of players that aren't my favorite.  not completely sure why, although he played well against the dodgers in the 2008 and 2009 nlcs.  at any rate, i was pleased to find a double of the gutierrez card among my 2003 dupes, and it was an easy decision to replace victorino in the center rectangle of the page.  the other cards remain unscathed.

rick auerbach came over from the brewers near the start of the 1973 season, but didn't suit up for the dodgers until 1974. it's a surprise that he got a card in the '74 set, but i'll take it.  auerbach hit .342 in 45 games for the dodgers in their pennant winning season, and then filled in for the injured bill russell for much of the 1975 campaign.  the 1980 topps design is a bit similar to that of 1974, and steve garvey's card has the added bonus of the all-star banner.  not my favorite garvey card, but we do get a look at his forearms front and center.

1985 topps may be my least favorite design of the decade.  at least for dodger cards.  look at bob welch's card - it's too cluttered and clunky at the bottom.  the fact that topps used the flying ball logo means that the card says 'dodgers dodgers' which is unnecessary.  plus, the position designation looks like it was shoehorned in.  not that the 2000 skybox dominion design is better as the names on the front of the card are difficult to read.  anyway, the card features two foreigners - eric gagne was born in montreal, and jeff williams was born in australia.  both debuted for the dodgers in september of 1999, but gagne outlasted williams who pitched in his final game during the 2002 season.

franklin gutierrez, another foreigner (venezuela), never did suit up for the dodgers during the regular season. he was traded in 2004 to the indians for milton bradley.  gutierrez was later traded to the mariners with whom he won a gold glove in 2007 and for whom he still plays today.

geoff zahn's 1975 topps card is pleasing to me not only because of the dodger stadium field level scoreboard that is visible behind him, but also because it reminds me that zahn was traded to the cubs early in the 1975 season for burt hooton.  nothing against zahn, but hooton was a big part of the team of my youth.  ed roebuck was a pretty solid reliever over 11 years in the majors. he pitched for the dodgers in the 1955 and 1956 world series, but missed out on the 1959 season and world series.  roebuck was coming off of a 10-2 season in 1962 when this card was released, but he was dealt to the senators during the '63 season for marv breeding who the dodgers kept off of their postseason roster en route to a sweep of the yankees in that year's fall classic.

we've seen 1985 leaf in the set already, but not 1985 donruss, so here's mike marshall.  i was still looking for superstardom from marshall at this point, and he had a good season in '85 with 28 homers, 95 rbi, and a .293 batting average, but his season was overshadowed by pedro guerrero's.  marshall also challenged the dodger single season strikeout record that year, but fell 12 short of billy grabarkewitz's then record of 149.  of course, marshall had about 75 fewer plate appearances.

the last card on the sheet is zack greinke's 2014 topps update all-star card.  that game was played at target field, and the hats the players wore were supposed to be a nod to the twinkies' batting helmets of the late 1970's. 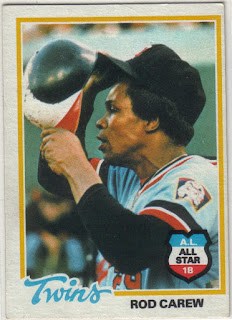 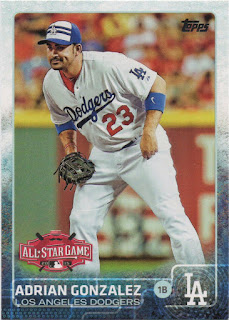 and this year, the players will wear some sort of san diego padre abomination 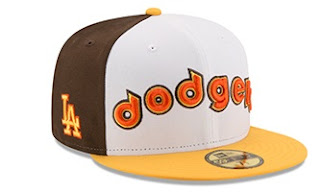 (at least during the workout and hr derby).

along with victorino's card at number 293, some others that didn't receive the call include 1996 donruss chad fonville at number 289, 1979 topps davey lopes at number 290, 1986 topps tom lasorda 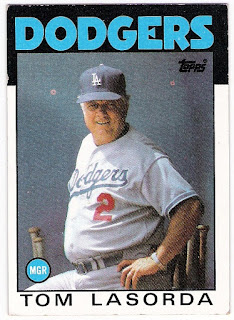 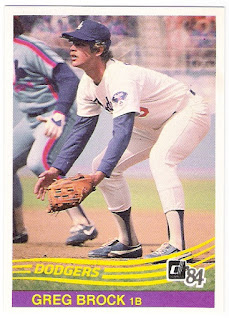 the 1975 topps geoff zahn card wins out over the others thanks to its dodger stadium background and red and blue border.

victorino also had a dodger card in 2003 just like the guy who replaced him on this sheet, but, like gutierrez, victorino didn't appear for the dodgers at that time.
Posted by gcrl at 9:55 AM