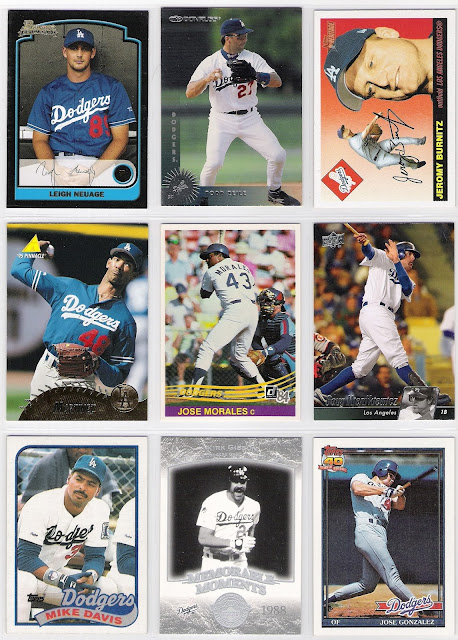 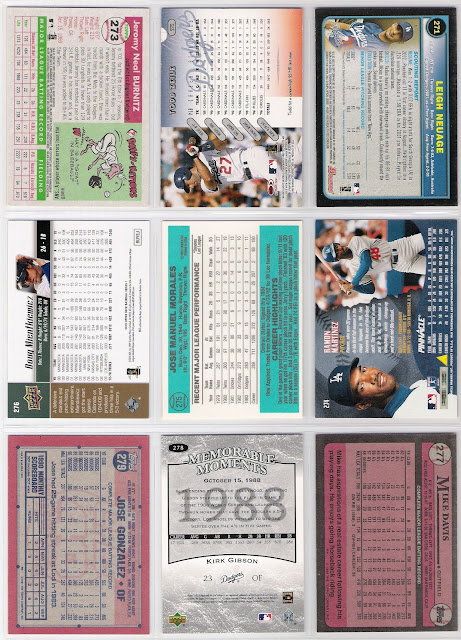 there is only one card of doug mientkiewicz as a dodger, and, since i used to have a pc of the guy, his 2010 upper deck card was a certainty for this set.

the bowman neuage card brings up thoughts of what might have been had neuage not passed away in 2003. i posted the chrome version of his card on my flagship blog, and shortly thereafter received an email from neuage's father relaying the news and providing a link to his online memorial.

todd zeile has two cards in the 1997 donruss set, and when i chose his card to fill this slot i realized that i only had one copy. i ordered another from sportlots, but chose the wrong one.  hate when that happens.  i finally got it right with my next order.  jeromy burnitz's 2004 topps heritage card is not his best card from 2004 (we'll see that one later on) but it fits in the set so there it is.

i may be in the minority, but i prefer the pinnacle cards like this 1995 ramon martinez over the black bordered sets they put out in the early 1990's.  i also prefer 1984 donruss to all other donruss sets of the 80's and 90's.  that jose morales card is great.  i assume that gary carter is crouching behind the plate, and the card features a shot we don't see too often on baseball cards.  also, it's great that donruss listed morales as a catcher, but he never went behind the plate during his dodger tenure which began in 1982.

doug mientkiewicz was probably my favorite player on the twins in the early 2000's, and i was happy that he was able to take his gold glove to boston and win a ring in 2004, adding to the gold medal he won in 2000 thanks to his home run heroics.  i was also glad to see him with the dodgers in 2009. i met him once at a card show and talked to him for a few minutes.  he had a few tommy stories to tell (lasorda was the manager of the 2000 olympic team) and mentioned that disney had been kicking around the idea of a movie about that team.  it would be interesting to see who they would have cast as lasorda.

and now we get to the happy circumstance that puts a 1989 topps mike davis card in front of a 2004 upper deck legends kirk gibson card.  one can't help but think of davis batting in the bottom of the 9th inning of game 1 of the 1988 world series with two outs and drawing the walk that made gibby's impossible home run possible.  after the radio silence and vin scully's improbable/impossible quote, joe garagiola noted that it was davis's walk that turned the home run into a game winner.  davis also homered later in the series, and what had been a frustrating season for him turned out to be one that is still celebrated by dodger fans.

finally, we have the 1991 topps  jose gonzalez card that actually features a photo of billy bean.  outside of the 1990 target set, there is no other card that i know of that shows bean as a dodger.  it's too bad that he doesn't get the name credit.  these days, bean is mlb's ambassador of inclusion which is great except that it is unfortunate that such a position is needed at all.

there were quite a few cards that could have been on this sheet, including a number of topps flagship cards like 2002 topps chan ho park at number 271, 1977 topps lee lacy 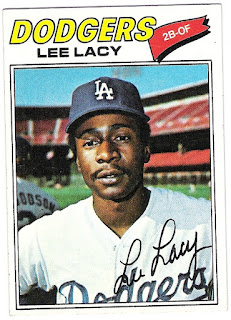 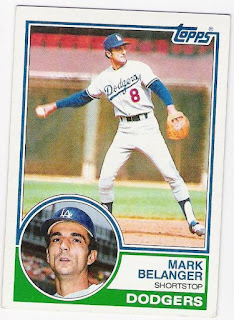 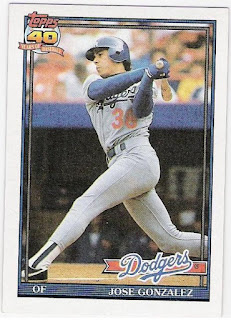 despite a few good ones here, i'll perhaps surprise folks and pick the morales card over dougie, gibby, and billy/jose.

it is unlikely that we will hear vin scully call the world series this season, at least for national radio as he did in 1988 among other years.  he has already turned down an invitation to broadcast (or even be part of) the all-star game, and it doesn't seem likely that the dodgers will win the pennant given the fact that they don't win very much unless kershaw is on the mound. hopefully, they pull it together and "win for vin".
Posted by gcrl at 9:55 AM