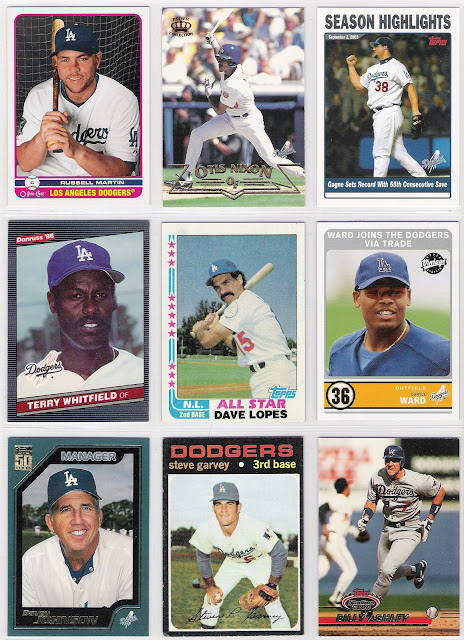 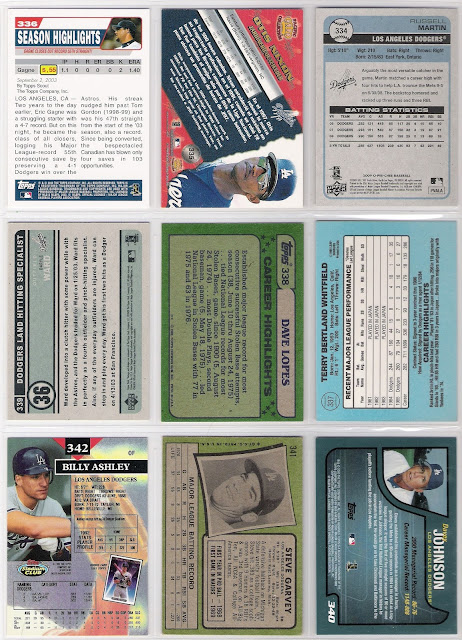 i suppose steve garvey's rookie card was always going to be number 341 in the set, but davey johnson's managerial card was also a sure thing. still, tough to be more of a no brainer than the '71 topps garvey.

i am pretty sure that the 2009 upper deck o-pee-chee set was supposed to use the 1977 topps/opc design.  the previews that they put out that year used the same design as what you see on the martin card above, but were referred to on checklists as "1977 o-pee-chee previews".  the backs sure looked like 1977 backs, 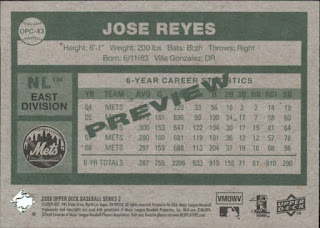 and you can see by the martin card that upper deck changed the backs before issuing the actual set.

otis nixon's 1998 pacific crown collection is a nice card - day game at dodger stadium is always a good choice for a card photo - and it reminds me of a story i heard a couple of weeks ago.  nixon played for the twins at one point in his career, and one of the local baseball scribes noted that in one of his first appearances for the team, the public address announcer called him amos otis by mistake. ok - the twins played the royals quite a bit back during the 14 years that amos otis was in the american league.  however, the announcer corrected himself by saying "i'm sorry - now batting, amos nixon".

next up is a 2004 topps card marking eric gagne's consecutive saves streak a 'season highlight'. i used to get a bick kick out of seeing dodgers on league leader and record breaker/highlight cards (i felt like it was a long time between when i started collecting in 1978 and manny mota's 1980 record breaker card), but now it's not quite as exciting for some reason.

terry whitfield was a giant when i started collecting in '78, but i do have one of his non-dodger cards in my dodger sets.  he was a yankee on the same 1976 topps rookie card that featured henry cruz.  anyway, whitfield was released by the dodgers early in the 1986 season - not too long after i found this card in a pack as i recall.

dave lopes was traded by the dodgers following the 1981 season, so i know he was gone by the time i found his 1982 topps all-star card in a pack.  still, it's one of his two dodger cards in the set, and one of his last dodger cards, period.  i did like steve sax, but i didn't like that he replaced dave lopes.  no cards of coaches over the last few seasons means that we likely lost the last opportunity for a current dodger card of lopes.  he's now the first base coach for his former dodger teammate dusty baker in washington dc.

daryle ward shows up on a card from upper deck's 2003 vintage release.  this was the second series or something, and didn't use the 1965 design that got me collecting the set in the first place.  i was confused when i saw these cards, to be honest.  i thought that maybe topps put a kabosh on the use of their designs, but then in 2008, upper deck had those 1969 style inserts and so i was really interested and then confused by the 2009 1977 previews.  i didn't think much about ward because he didn't do much as a dodger.

i was happy to see manager cards back in topps sets in 2001, especially since the dodgers had a new manager since the last time topps made cards for the skippers.  they had gone through a couple, in fact.  johnson was replaced by jim tracy following a 2nd place finish in the nl west in 2000, but at least we have this card to remember him by.

we saw one of the last dodger cards of an infielder earlier, and now we have the first of another.  steve garvey's 1971 topps rookie card was a jewel of my early collection.  it was pretty tough to find growing up in southern california, especially in my price range.  it is weird still to see him with a fielder's glove as opposed to a first baseman's mitt, and that black batting glove is so chic.

finally we have a 1993 stadium club card of billy ashley.  i honestly thought this was an eric karros card when i started writing this post.  it's a reasonable mistake, however, as ashley has the same sort of running hunch that karros displayed.

it was going to be tough to displace many of these cards no matter what other options existed, but some of the cards that weren't chosen include 1982 o-pee-chee fernando valenzuela at number 334, 2002 upper deck dave hansen at number 335, 1994 upper deck jim gott 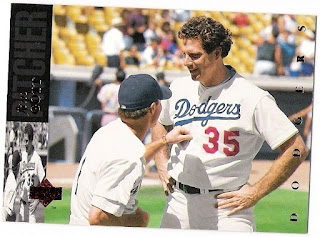 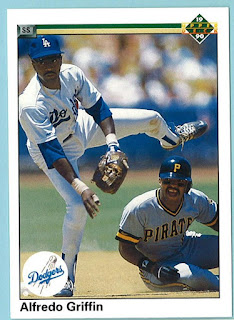 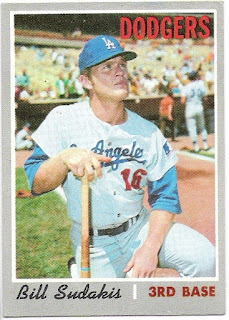 i really do like that topps captured the fist move that gagne demonstrated after each save, but there's no way that my favorite card on the page isn't going to be steve garvey's rookie card.

i saw gagne pitch in person in 2002 and 2004, but not in 2003 at the height of "game over". in 2004, i was at a game at fenway where he was brought into a game in a non-save situation and struck out the side in order (david ortiz took strike 3 to end the game). not quite the same electricity that was to be experienced at dodger stadium, to be sure.  anyway, kenley jansen just passed gagne on the franchise's all-time saves leader board.  it's no surprise as the closer position has become so specialized, but for a long time, jim brewer was at the top of that list.  he was ultimately passed by todd worrell, who was passed by his replacement jeff shaw, who was passed by his replacement in eric gagne.
Posted by gcrl at 9:55 AM