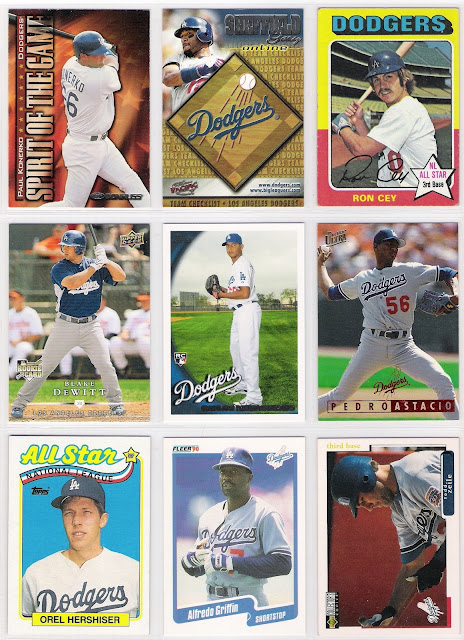 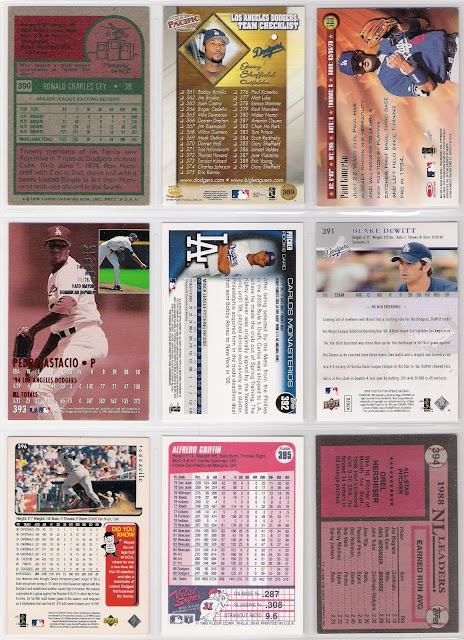 that would be the pacific online sheffield checklist.  i have foregone all of the other dodger cards in the online set because i knew i had doubles of this card and it is so "pacific". i like the big dodger logo right in the center of this card, too.

paul konerko makes his first (and only) appearance in the set via a card from 1998 donruss. spirit of the game was originally an insert set, but at some point donruss made it a subset of the regular set. konerko took his spirit to cincinnati at the 1998 all-star break before settling in with the white sox for a very productive career.

gary sheffield got front billing (and deservedly so) for the dodger team checklist in the 1998 pacific online set.  this was a great set, with 29 dodgers represented, including short-timers like thomas howard, matt luke, tom prince, and trenidad hubbard.  i never did check out any of the links when they were active - i wonder what they looked like.

next up is night owl's favorite card - the 1975 topps ron cey.  he has discussed the fantastic-ness of this card many times, so i won't try to tell you anything more about it. instead, i'll reiterate my opinion that the pants blake dewitt is wearing on his 2008 upper deck first edition card are the worst baseball pants of all time. i think they look terrible, and i am not a crabby old fart.  carlos monasterios is also wearing bad baseball pants on his 2010 topps card.  i prefer his 2010 bowman card 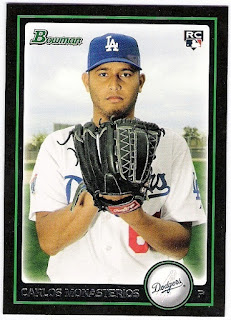 pedro astacio gets the call to represent 1995 fleer ultra, which is about two years before i would say the set actually became anything special.  my favorite thing about astacio is they way he used to wiggle his arm as it hung from his side while he was checking the signs.   i also "threw" a no-hitter with him on the old tony larussa baseball game for pc in the late 1990's.

there were a lot of orel hershiser cards issued in 1989, and this topps all-star card is one of them. hershiser was the nl rhp in the subset, and kirk gibson was the pinch hitter, as opposed to the dh for the american league. i thought that was a nice touch by topps.

alfredo griffin's 1990 fleer set is, like the rest of the set in my opinion, forgettable. griffin had a much better year in 1989 than he had in 1988 at the plate, but the ring is the thing, and by that account 1988 was a much better season.

last card of this page is the 1998 collector's choice todd zeile.  zeile looks like he might be boning his bat (that's something players did back in the day, with mark grace apparently preferring a cow femur).  i like most of all the fact that this card displays the jackie robinson patch that the dodgers wore in 1997, although it is not my favorite card to do so. 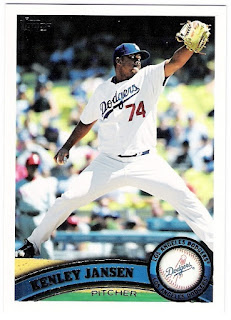 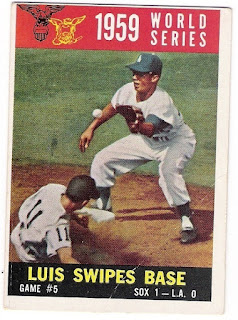 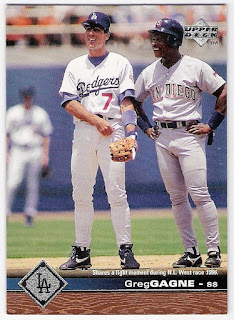 the red background on the todd zeile card, along with the jackie robinson patch, puts this one on top for me.  you know i like that card if i passed on the gagne card to get it in the set.

seeing the gagne card reminds me that i wanted to get rickey into the set, but did not do so.  i took another look at his dodger cards, and i think i've found a spot for him.  i actually have 4 or 5 cards to replace, and i'll update all of the posts accordingly.
Posted by gcrl at 9:55 AM