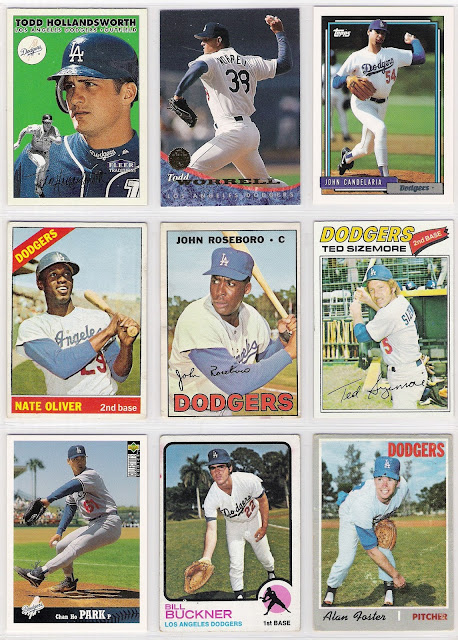 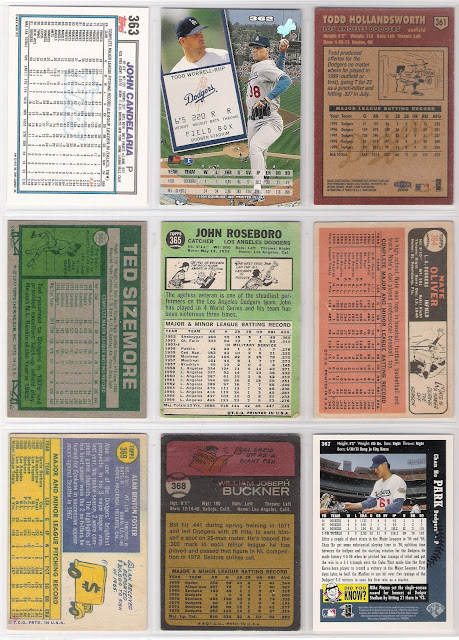 there is not really an obvious choice here, but the closest thing to a no brainer on this page would be the 1977 topps sizemore card, i think.  it's the only card we have of the 1969 rookie of the year from his second time around with the dodgers.

fleer kind of ripped off the 1954 topps design with their 2000 tradition release, and then they used the 1956 topps design the following year before realizing that they had some designs of their own they could use.  i'm not a big fan of this particular hollandsworth card - i think the green is too bright - but i had a double of it and it fit in the set.

the 1994 leaf card is todd worrell's first entry in the set. two todds in a row, and two rookies of the year in a row, too.  worrell was, to me, the first modern closer that the dodgers employed, and he was the one who broke jim brewer's team saves record (since surpassed by jeff shaw, eric gagne, and now kenley jansen).  just like the front of hollandsworth's card gives us mini holly and giant holly, the back of worrell's card gives us a giant worrell in dodger stadium.  i appreciate the use of chavez ravine as the background for the back of the card, but i don't need it to be obscured by a third picture of worrell.

the back of john candelaria's 1992 topps card should also have a picture of dodger stadium on it, but for the fact that the candy man has too many rows of stats.  this is partially due to the fact that topps gives a separate row to each team for which candelaria pitched each year, so there are a few seasons with a couple of rows.  i prefer this approach to stats on the back as opposed to combining stats for different teams, probably because this is the way topps did it (and still does).

i mentioned above that the 1977 topps ted sizemore card is the only one produced showing him as a dodger following the trade between the dodgers and cardinals in march of 1976 that sent willie crawford to st. louis.  that trade occurred too late, i guess, for sizemore's sspc card to be changed or for a topps traded card to be made.  by the time this card was issued, however, sizemore was playing for the phillies.  he was on the field for the phils in game 3 of the 1977 nlcs (aka 'black friday'), and it was his 9th inning fielding error on greg luzinski's throw (the ball skipped away from sizemore) that allowed manny mota to go to third where he scored on davey lopes' infield single.  it's too bad, but i'm glad the dodgers won.

chan ho park shows off some spring training bullpen stuff on his 1996 upper deck collector's choice card.  it's the kind of photo that a fan might take while walking around dodgertown in the mid 1990's, and i like that.  i also like the dodger stadium background in the photo on the back.  no giant chan ho, either.

bill buckner is also at spring training on his 1973 topps card, but he's not posing for a fan.  billy buck is wearing a first baseman's glove as he was wes parker's heir apparent, but we all know now that he eventually moved to the outfield to make way for steve garvey.  the only bad thing about this card is the cartoon on the back:

buckner was born in the north bay - vallejo, to be exact - and attended high school in napa, so his fandom for the giants makes sense. still, i imagine the original owner of this card being disturbed by this fact and taking a red marker to the cartoon to express their disgust.

the last card on the page is alan foster's 1970 topps card.  the cartoon on the back of foster's card notes that he received a $100,000 bonus to sign with the dodgers in 1965. that's a better cartoon.

for whatever reason, some of the cards that i passed on for this page include 2001 upper deck vintage dodgers rookies (mike judd, hiram bocachica, and luke prokopec) at number 361, 1982 donruss terry forster at number 362, 1961 topps john roseboro at number 363, 1959 topps danny mcdevitt 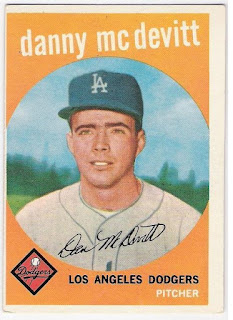 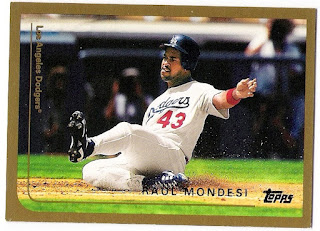 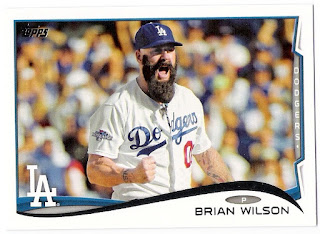 chan ho park's 1996 collector's choice card is my favorite here.  something about the background and the design of the card.

we are halfway through the set already.  this seems like a good spot to thank people for following along so far, and for reading, commenting, and continuing to trade cards with me.  it is much appreciated!
Posted by gcrl at 9:55 AM