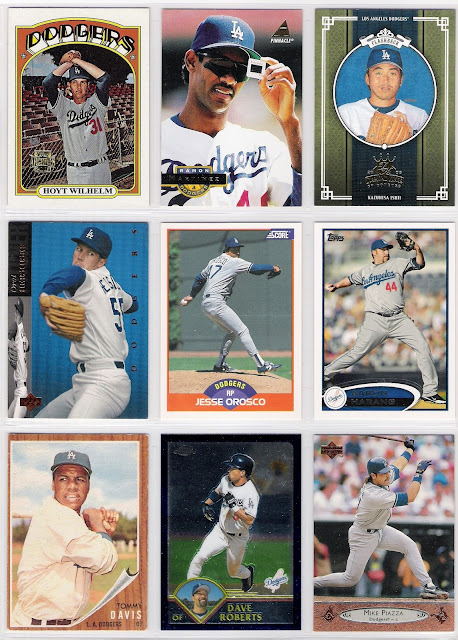 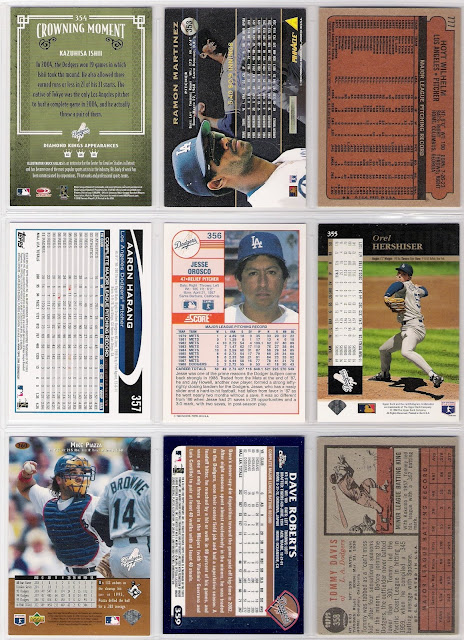 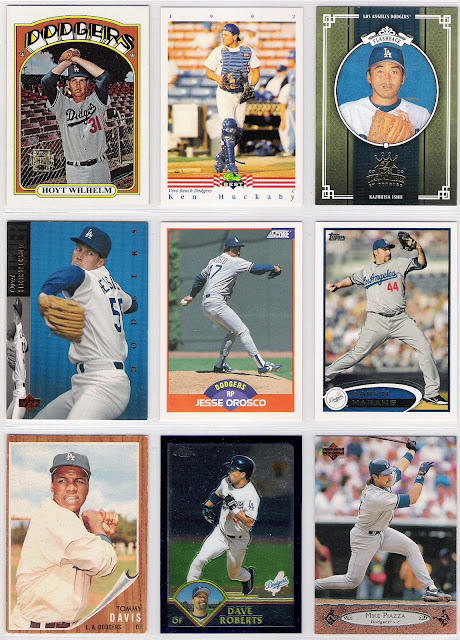 hoyt wilhelm has just one card from his playing days as a dodger, and it's his 1972 topps card.  this reprint of that card issued as part of the 2001 topps archives set was a no brainer to make the set.

another thing about the wilhelm card, his 1972 topps card was numbered 777 (as you can see in the above scan) which puts it outside the parameters of this set.  so, i was happy that the archives reprint numbered it at 352.  i won't blow up the back of the card to show you the number as i did with the 1952 jackie robinson reprint from the same set - you'll just have to trust me.  wilhelm made his debut in 1952 against the dodgers, facing pee wee reese, billy cox, roy campanella, jackie robinson, and duke snider in his initial inning of work, and finished his hall of fame career as a dodger 20 years later. in between, he appeared in a record 1,070 games as a pitcher. as implied by the title of this post, wilhelm wore number 31 during his stint as a dodger.

ken huckaby was a dodger catching prospect who was in the dodger organization through the 1997 season. he didn't make his big league debut until 2001, nine years after this 1992 classic best minor league card was issued.  he never suited up for the dodgers, but i like this card and the holman stadium seats in the background.  really, the only criteria for a card being eligible for this set is that its number is less than 727 and it be considered a dodger card.  huckaby's card meets both.

ken huckaby's 1992 classic best card has given way to ramon martinez's 1994 pinnacle card. aside from being a major league card of a player that actually played for the dodgers, it features a fairly unique photo of martinez studying a slide. it also makes the top two rows of the sheet an exclusively pitcher's zone.

kaz ishii was no longer with the dodgers when this 2005 diamond kings card came out, having been traded to the mets for jason phillips straight up.  ishii went 13-8 in 2004, his third season with the dodgers, but his era had jumped almost a full run to 4.71, and his k/9 ratio had gone from just under 9 to just over 5.  it was time to cut bait.

while ishii was banished to flushing meadows, the 1994 upper deck set banished players to the phantom zone with the skewed photo on the side bar.  bowman used a similar technique in their 1995 set, but upper deck does it better.  i liked this set a lot and it was the first upper deck set that i set out to complete.  it was also the smallest upper deck set to date.  anyway, i really like the hershiser card here because it features the old corrugated fiberglass walls of the dodger stadium bullpens that my brother and i used to stand above and watch the likes of don sutton, burt hooton, and (far too often) doug rau warm up before games.  i mean that it seemed like rau was the starting pitcher for a lot of the games we attended, not that he was used too often.

speaking of being used often, jesse orosco who appears here on a 1989 score card currently holds the record for most games pitched at 1,252.  he wasn't the one who broke wilhelm's record (that was dennis eckersley who pitched in 1,071 games), but he sure did pass it. the closest active pitcher is francisco rodriguez, who has appeared in 887 games.  aaron harang appeared in only 387 games during his career which may or may not have ended last season, and only 6 of those appearances were in relief.  we were given this 2012 topps card during his 10-10 season with the dodgers in 2011 (his only season with the dodgers).  in his second start for the club, harang set a dodger record by striking out 9 consecutive batters. he k'd 13 total that night, and dodger pitchers tied a team record for a ninie inning game by striking out their opponent 18 times.  of course, they almost lost the game.

tommy davis's 1962 topps card is one of my favorite dodgers from the set, due in large part to the way his pose fits the image space.  speaking of which, he's got the same pose as gino cimoli had on his 1958 topps card, but topps let davis keep his bat.  as an aside, i am ashamed to mention how long it took me to really look at the 1962 design and see that it was supposed to reflect a rectangular photo posted on a piece of wood (fence?). i had not noticed the curl as part of the image until the late 1990's.

the page's penultimate card features the current dodger manager not looking at his base coach while running on a 2003 topps chrome card.  that's ok because it looks like the play is in front of him, and we all know that dave roberts was ok on the basepaths.  the final card features one of this year's hall of fame inductees taking a cut on his 1996 upper deck card.  again, as the title of the post implies, mike piazza wore the same number as hoyt wilhelm, 31.  this is not the first time that two hall of famers wore the same number for the dodgers (both frank robinson and greg maddux wore number 36, for example), but the number still won't be retired by the club until joc pederson gets voted in to the hall.  hey, it could happen. 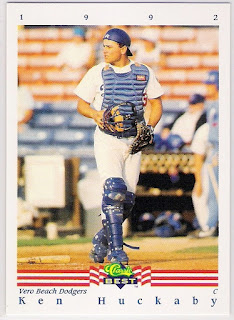 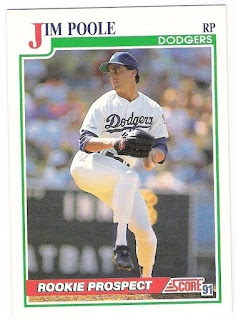 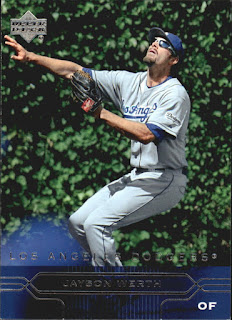 the 1994 upper deck hershiser card wins for this page, thanks to the blue bullpen background and despite the phantom zone card design.

looking at this sheet now, i am pretty sure that huckaby is not long for the set.  as i mentioned above, pretty much the only requisite to be eligible for this set is to be on a card that is considered a dodger card, and while the huckaby card fits that description as far as i am concerned, there will likely be a change. not that i am opposed to minor league sets - they are part of my dodger collection, after all - but that pinnacle martinez card is a pretty good one.

yep, so good that i've made the switch from huckaby to martinez.
Posted by gcrl at 9:55 AM