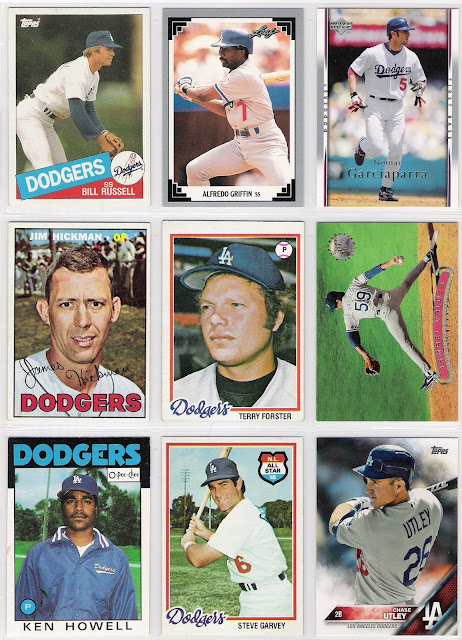 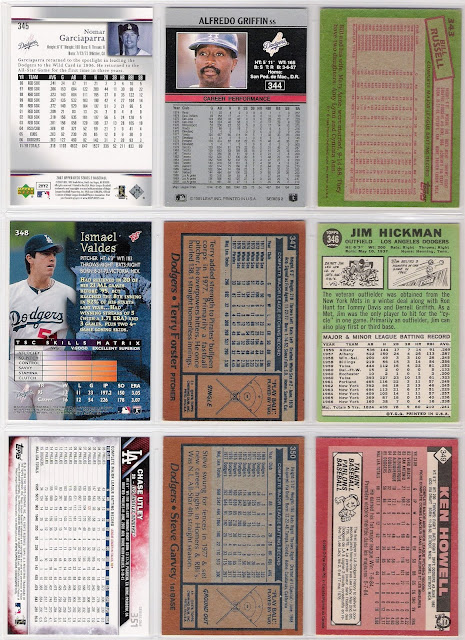 that would be the 1978 topps steve garvey card. duh.

i am still not a fan of the 1985 topps design, but there is nothing to be done about it.  bill russell gets listed as a shortstop by topps, and that's fair; however, he was playing less and less time there and more in the outfield.  in '85, russell played almost as much outfield as he did short, and somewhat surprisingly, topps listed him as "ss-of" on his 1986 card.  credit where credit is due.

i don't think i bought any packs of 1990 or 1991 or even 1992 leaf in real time. i did buy a lot of '93 leaf, though.  anyway, this alfredo griffin card most likely didn't enter my collection until the mid-2000's or later. griffin is/was one in a long line of shortstops to try to fill russell's cleats.  he was able to join russell as a world champion dodger shortstop, which is a fairly exclusive club.

nomar garciaparra, somewhat surprisingly, did not play shortstop for the dodgers at all until his third and final season with the club.  his 2006 season was better than could have reasonably been expected, which made the next two tougher to take.  i remember watching some of his last at bats with the dodgers during the 2008 playoffs and cringing a bit.  still, i wish there were more nomar as a dodger cards, and i am happy that upper deck made two cards per player in their 2007 set.

jim hickman was only with the dodgers in 1967 as a result of a trade with the mets that occurred on november 22, 1966, so i am thankful that topps had hickman in a later series and was able to show him as a dodger. he had much greater success later in his career with the cubs (his 1970 season was pretty darn good - 32 homers, 115 rbi, .305 average), but perhaps the highlight of his career occurred while wearing dodger blue.  hickman, an outfielder by trade, played a bit in the infield as well, but was called upon to pitch the last 2 innings of a game against the giants in june of 1967.  he faced just 7 batters and allowed 2 hits (one batter singled but was thrown out at second going for a double).  one of those hits was a home run by willie mays.  i think that would be a pretty good story for the grandchildren.

like hickman, terry forster was acquired by the dodgers on november 22.  that was in 1977, however, and was also early enough in the card production process for forster's photo to be airbrushed and have his team affiliation switched from the pirates to the dodgers despite the lack of multiple card series.  i am guessing that the checklist was already set, however, as i see it as an anomaly for topps to put two cards featuring players from the same team so close together in the set back then.  my point being that forster's card was supposed to be a pirate card.  as far as i can tell, the cutoff point for team changes was december 3, 1977.  that was the day that ron schueler signed with the white sox - the team that he is affiliated with in the 1978 topps set - and two days before bobby bonds was traded by the angels (with whom bonds is affiliated in the set) to the white sox.  thank goodness for o-pee-chee!

it would have been nice of topps to crop the photo on ismael valdes' 1996 stadium club card just a little bit differently so that it would appear that he was striding over the stadium club logo as if it were lava.  ken howell's 1986 o-pee-chee card is pretty much a non-event. it looks like the photographer is standing between howell and wherever it is howell would rather be.

for my money, the 1978 topps steve garvey card is the greatest card ever made.  not objectively, but subjectively anyway.  i think it is the perfect baseball card. to pull this card from a pack in 1978 while living in dodger territory was just about the best thing i could hope for as a seven year old collector.

finally, chase utley represents 2016 topps in the set. i was surprised utley was re-signed by the dodgers for 2016, but he's played fairly well.  sooner or later, however, the dodgers will need to get second base figured out for the long term. this was the first 2016 card to be added to the set, and was later joined by the walter o'malley card from panini seen earlier on. i think i will probably add another. we'll see.

a couple of these cards had no chance to make the set, but they were still options:  1994 topps finest pedro astacio at number 343, 1961 topps sandy koufax at number 344, 1977 topps reggie smith 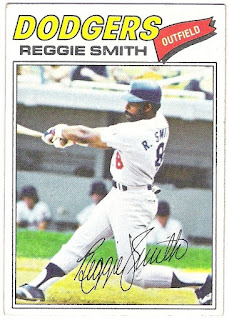 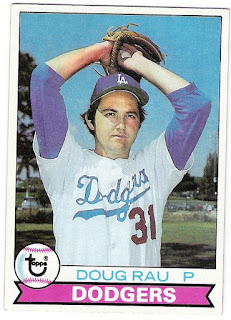 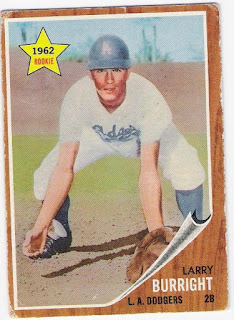 that would be the 1978 topps steve garvey card, which is also my favorite card of all time.

i am not completely comfortable with two 1978 topps cards on the same page, but that is what i chose when putting this thing together.  i want terry forster in the set; the 1978 topps dodgers pretty much get preference over other cards in the set; and there was no way that garvey's card wasn't making it.  i blame topps for putting two dodgers so close together on the checklist - even if one of the cards was certainly a pirate card when the checklist was being developed.
Posted by gcrl at 9:55 AM