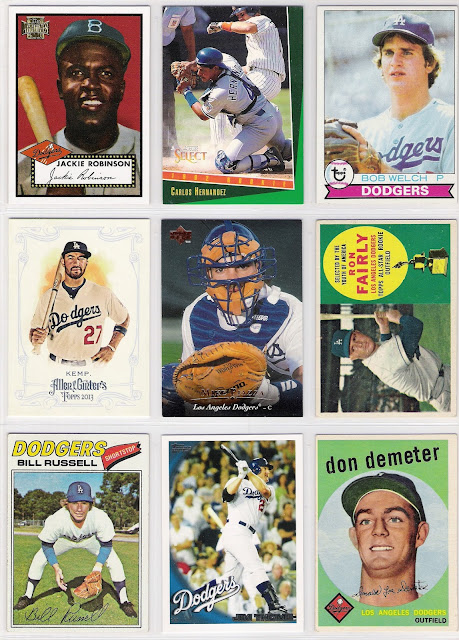 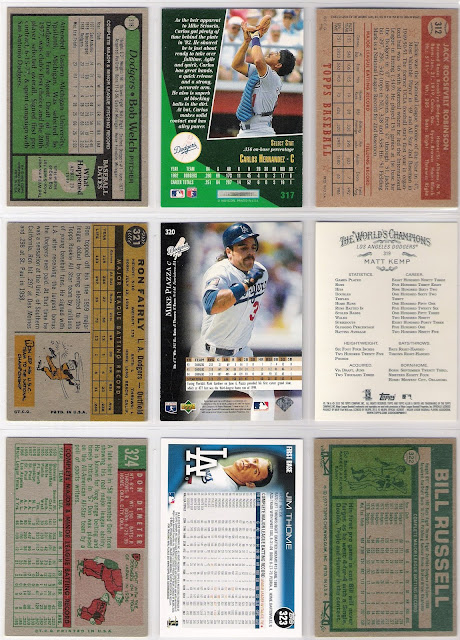 there are some pretty key cards here, but i wanted to get a version of jackie's 1952 topps card into the set, so that one is the biggest no brainer of the bunch.

first things first - the 2001 archives jackie robinson card is numbered 312 on the back, but i have it at number 316.  that's because 312 was jackie's card number in the original 1952 topps set (the first of the high numbers).  you have to look really closely at the fine print on the back 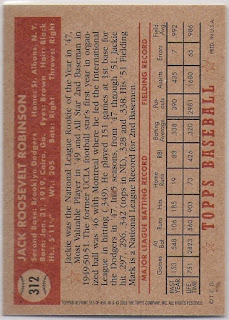 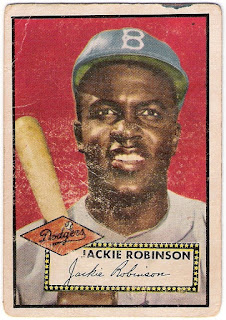 is one of the highlights of my collection, and i am happy to have it represented in the frankenset.

the back of carlos hernandez's 1993 select card anoints him as the "heir apparent to mike scioscia" in the dodger catching lexicon, but unfortunately for carlos, there was another.  thankfully for us dodger fans, there was a bob welch card in 1979 to collect after the rookie struck out reggie jackson to end game 2 of the 1978 world series. that put the dodgers up 2 games to 0, but it would be the last dodger highlight of the season.  there is no mention of welch's world series experience on the back of the card, which was disappointing to me when i pulled my first copy of this card from a pack.  still, two years later, i was still able to use the "he struck out reggie" to pry welch cards away from the yankee fan across the street.

matt kemp's 2013 a&g card is here to remind me that he was once my favorite dodger, and the guy that i hoped would break eric karros's franchise home run record.  of course, i thought that the next guy on the sheet would have been the one to set the franchise home run record.  mike piazza is, of course, the catcher that blocked carlos hernandez from fulfilling the prophecy noted on the back of the select card earlier on the page.  i like his 1995 upper deck card because it focuses on piazza the catcher (at least on the front) instead of giving us another card of him standing at the plate.  both kemp and piazza (and steve garvey) wound up in san diego playing for the padres.  hopefully that trend doesn't continue.

ron fairly's 1960 topps card is cool because of the big ol' rookie cup/trophy.  1960 was the first year that topps had the rookie cup in their set, and i am still a bit upset that they took a few years off from putting the cup on cards - most notably 1974 when davey lopes would have had one and from 1982-1984 when fernando, saxy, and greg brock would have all been rocking the cup.

bill russell's 1977 topps card balances out the kemp and piazza cards in that it reminds me that it is (or at least was) possible for a player to stay with one club for a lengthy career.  of course, russell was unceremoniously dismissed by the team as its manager, and wound up wearing a tampa bay devil rays uniform as a coach and minor league manager.

jim thome's 2010 topps card was another card that i highly anticipated.  i was worried that topps would leave thome out until series 2 by when they would have photoshopped him into his twins uniform.  well, i got a thome dodger card in series one that i am pretty sure includes former dodger owner frank mccourt just to the right of thome's shinguard. thome was an odd pickup for the dodgers, as he was only available for pinch-hitting duty, but the dodgers are no strangers to carrying pinch-hitting specialists once the rosters expand.  the dodgers are the only team for which thome played that he did not hit a home run. for the record, his 2010 season in minnesota, the first year of target field, was fantastic. he was a huge fan favorite and had some big hits for the club.

lastly, we have don demeter's 1959 topps card.  not yellow like most of the other dodger cards in the set, this card is a welcome sight in my team binder even if the image shows demeter not acting natural, and is the same one that topps used for his 1958 card.

i passed over a few cards when putting this sheet together such as 1995 pinnacle raul mondesi at number 316, 2015 topps clayton kershaw at number 317, 1980 topps jerry reuss 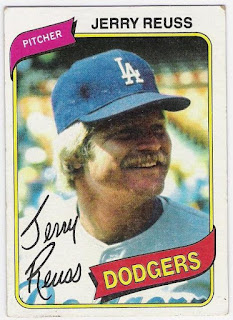 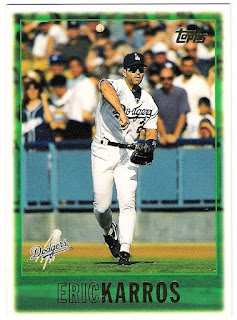 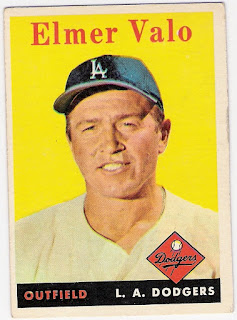 oh the joy of having a bob welch card in 1979! it is easily my favorite card on the page.

i am so glad that we aren't hearing anything about either of the mccourts these days.
Posted by gcrl at 9:55 AM