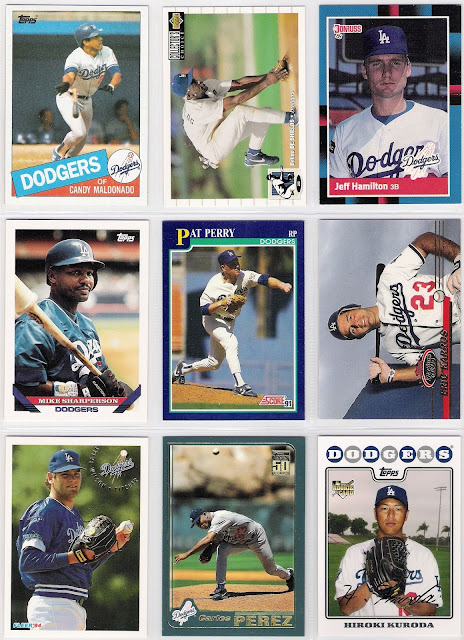 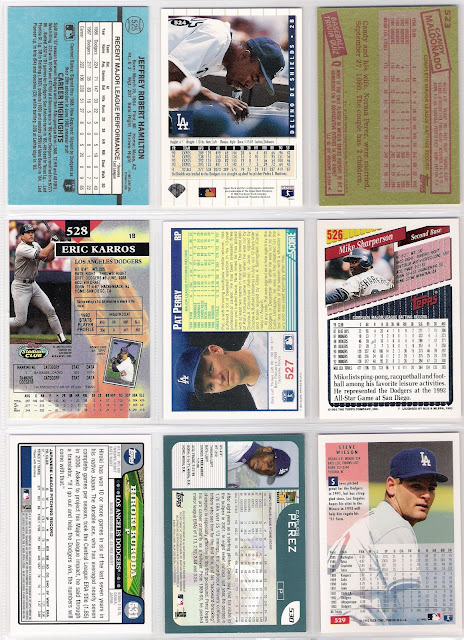 i don't think i can stretch any of these cards into being any sort of a no brainer. sorry.

candy maldonado was one of the dodger prospects that i was really excited about in the early 1980's, along with mike marshall, greg brock, and even ted power.  unfortunately, maldonado didn't do as well at the big league level as i had hoped, and this 1985 topps card came from his last season as a dodger.  he did carve out a decent career, however, making it to the world series in 1989 with the giants and winning a ring with the 1992 blue jays.

delino deshields joined the dodgers in 1994 after he was traded by the expos for pedro martinez. by all accounts, deshields was shaken by the trade, and i could understand why given the talent on the expos at that time.  his time with the dodgers is often looked at with the benefit of hindsight, but i maintain that i was not upset by the trade. deshields was 25 with four full seasons behind him, including an all-star selection, when the dodgers traded for him. my hope was that he would stem the tide of stop-gap second basemen that the dodgers had employed following the departure of steve sax, and i really thought that deshields was the guy. if not for injuries and the incredible success of pedro (which had to be a burden on him), who knows what might have happened as deshields did have a couple of good seasons after leaving los angeles.

jeff hamilton's 1988 donruss card gives us a peek of the left field pavilion and the diamondvision screen that was installed in dodger stadium in 1980.  it was the first of its kind, and while the video element of the screen debuted at the all-star game, the dodgers tested still images on the screen throughout the first part of the season. i know this because a young gcrl was featured on the screen wearing a dodger helmet and steve garvey jersey during a game.  unfortunately, my dad couldn't get to his camera in time to capture the moment.

they also serve, those who sit and wait.  vin scully is good for that phrase once or twice a season, and it certainly applied to mike sharperson. i think his 1993 topps card is a good representation of the utlity player/pinch-hitter which was sharperson's role for most of his career.  when he did play regularly in 1992, he made the all-star team as the representative of the worst los angeles dodger team in history.

pat perry's 1991 score card features the blue border which works so well for dodger cards, but the cropping of the photo falls just short of the excellence displayed on tim crews' 1989 donruss card. we do get more palm tree trunk, however.

it was a cloudy day in vero beach when the photo for eric karros' 1993 topps stadium club card was taken. sometimes cloudy skies lend themselves to good lighting and dramatic photos. this was not one of those times.

steve wilson is wearing the same sort of pullover on his 1994 fleer card that sharperson has on his '93 topps card. wilson joined the dodgers during the 1991 season and pitched really well in his 11 games that followed - he did not give up a run, nor did he allow any of the 16 runners he inherited to score.  the dodgers kept him around for two more seasons which were his last in the bigs, meaning that this card is a final tribute.

you are probably well aware of how much i liked the murals that the dodgers put on their outfield wall during the late 1990's and early 2000's, and even more so how much i like when those murals show up on baseball cards.  the angels also put murals up in 2000, and this 2001 topps carlos perez card shows a bit of them in the background, along with the disney-fied fake rocks beyond the fence.  i'm not sure what the purpose of the murals were - it's not the team's hall of fame because bob boone is up there - but i think that the players in the background include nolan ryan and boone based on what appears on garret anderson's 2001 topps card.

today's final card is a 2008 topps hiroki kuroda. 2008 topps is not one of my favorite designs, but topps did issue a 55-card set of dodgers that year (a set that included coaches!), so i'll give it a pass.

some cards that came close to making the set include 1975 topps tom paciorek at number 523, 1991 upper deck orel hershiser 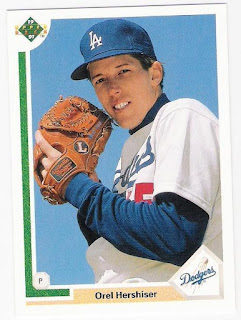 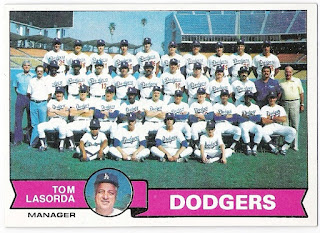 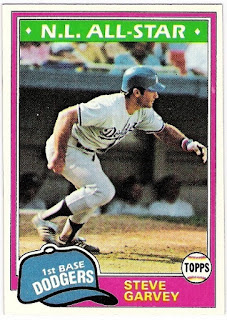 it's not dodger stadium, but i do like the 2001 carlos perez card mostly because of the background.

i neglected to mention that delino deshields is wearing a mask on his 1994 collector's choice card, following an accident in the batting cage during spring training that left him with a broken cheekbone.  i believe giancarlo stanton is the most recent big leaguer to wear some sort of facial protection, although i am pretty sure that jason heyward wears a helmet extension to cover his jaw, too.  i recall dave parker and ellis valentine wearing football style masks at the plate in the late 1970's, but i don't think any of them wore anything in the field like deshields is doing.
Posted by gcrl at 9:55 AM