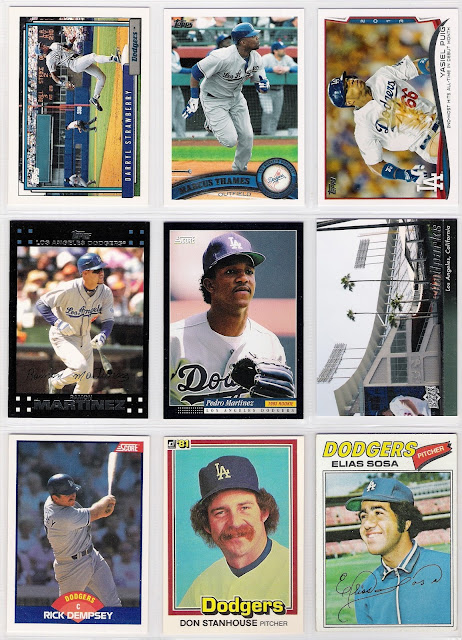 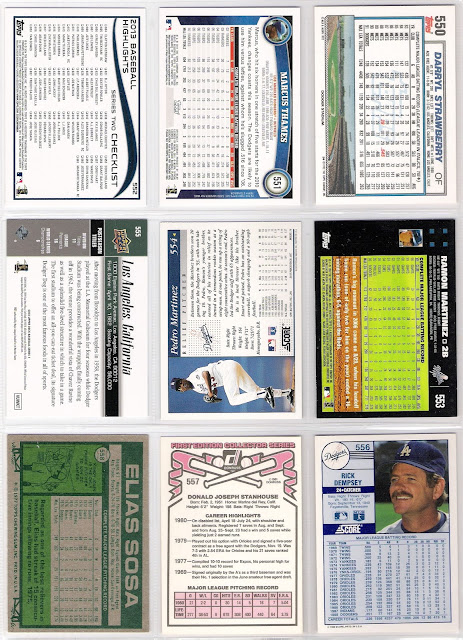 the strawberry card came to mind before the dodger stadium card (it is one of my favorites, after all), so it qualifies as today's no brainer.

the sheet starts out with four straight running men.  darryl strawberry's 1992 topps card is pretty classic, with the straw rounding third at shea stadium.  next, short-time dodger marcus thames is running out of the batter's box on his 2011 topps card. thames was signed by the dodgers prior to the 2011 season, and lasted with the club just until the middle of july that season.  he returned to the yankees, but didn't make it back to the bigs after his stint in los angeles.

yasiel puig is running around the bases at dodger stadium on this 2014 topps card that doubles as a checklist. puig is honored for having the 2nd most hits in a debut month in history.  of course, the card doesn't tell you that the top spot on that list belongs to joe dimaggio, but that's why i'm here.

last running man is ramon martinez (but not that ramon martinez) on his 2007 topps card. ramon e. martinez played for the dodgers in both 2006 and 2007, and although their careers overlapped, this ramon never faced the other ramon.  the other ramon's brother, pedro, did face this ramon.  this ramon was 0 for 3 with a walk against the hall of famer who is the second martinez (martini?) to make this sheet courtesy of his 1994 score card.

next up is the dodger stadium card from 2010 upper deck. this card is not as bad as some of the other stadiums (the target field card is literally a photo taken from the street (7th street to be exact) during construction), and it offers up a view not previously seen on a card.  it's too bad that the photo was cropped so that we don't get to see the full eric gagne banner, but we still see the windows of the stadium club restaurant and the back of the right field pavilion, along with some palm trees.  no palm trees at target field, by the way.

rick dempsey's 1989 score card features the dodger backup catcher in away grays that almost blend into the background.  my favorite rick dempsey card is his 1989 upper deck card. will it be in the frankenset? maybe.

following dempsey is a former oriole teammate of his, don stanhouse.  stanhouse's 1981 donruss card is my favorite of his dodger cards - there are only three mainstream cards to choose from - due to its high school yearbook look.  it's kinda zany.  stanhouse was coming off of two good seasons as the orioles' closer (although he did not have a good postseason in 1979) when the dodgers signed him as a free agent for the 1980 season.  stan the man unusual gave up four runs in his first game as a dodger, and missed most of the summer due to injury.  he was released at the start of the 1981 season, which was way too late to keep him out of the topps, fleer, and donruss sets - thankfully.

last up is a 1977 topps elias sosa card.  sosa is probably best known for being one of the dodger pitchers (along with burt hooton and charlie hough) to give up a home run to reggie jackson in game 6 of the 1977 world series.  that was the last pitch sosa threw as a dodger. 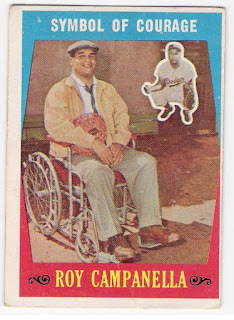 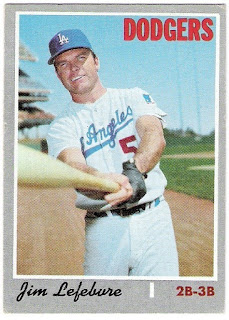 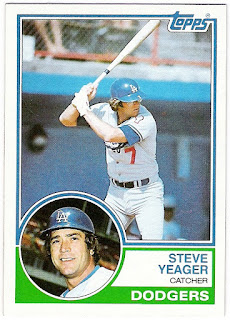 the dodgers have had two ramon martinezes (martini?) two mike marshalls, two mike ramseys, two reggie williamses and most recently two roberto hernandezes (including the one that once was known as fausto carmona) but if you go back far enough in franchise history, there have been two dick egans, two bill harts, two jim hickmans, two jim hughes, and two jack ryans as well.  this doesn't count the two dick schofields and two ivan dejesuses because those were father/son combos.
Posted by gcrl at 9:55 AM