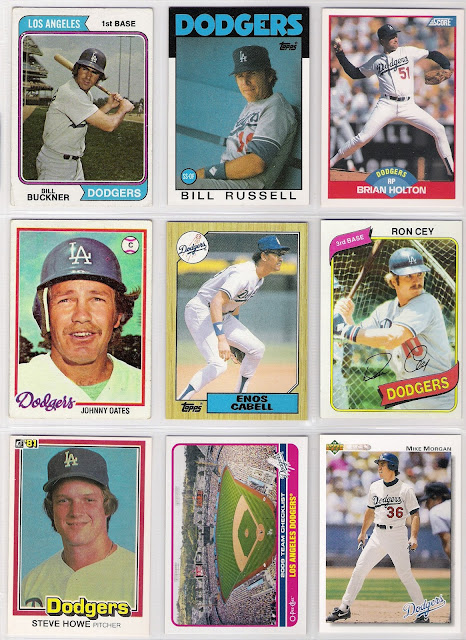 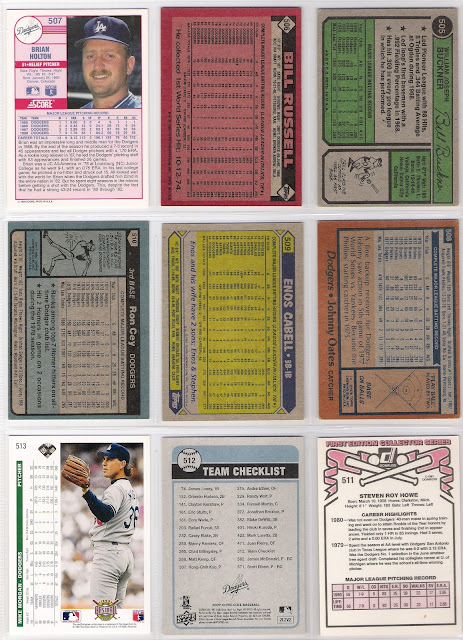 there are only a few cards of dodger stadium in mainstream sets, and i knew i wanted this so-called o-pee-chee card of it in the set.

billy buck leads things off with his 1974 topps card. note that he is listed as a first baseman on the card.  that didn't last long, as steve garvey established himself as the team's first baseman, with buckner moving out to left field.

another bill - this time russell - fills the next spot in the set.  russell is relaxing in the dugout on his 1986 topps card, which makes sense as the dean of the dodgers started only 43 games in what would be his final season.  that total did include, however, his first (and only) career start at third base.

i like brian holton's 1989 score card because it features a glimpse of the old field level scoreboard in dodger stadium in the background. i am thankful that score's production schedule didn't afford them time to pull or modify holton's card following the december 1988 trade that sent him to the orioles.

johnny oates makes his debut in the set, which is understandable since he has only a few (three, i think) dodger cards to his name.  because he has this 1978 topps card showing him as a dodger, however, he may as well have been a dodger for life as far as i am concerned because i think of him as a dodger first.  in fact, oates joined tommy john as being members of the 1977 and 1978 dodgers who lost to the yankees in the world series only to join the yankees and lose to the dodgers in 1981.

are you aware the the enos cabell card here is only the second 1987 topps card in the frankenset so far? here we are in the 500's, and there has only been one other - tom lasorda's card at number 493 - and i am considering switching that card out with a 1985 topps orel hershiser rookie.  that doesn't have anything to do with enos, who was one of the long number of third basemen that al campanis and fred claire and dan evans brought into town between ron cey and adrian beltre.

speaking of cey, here he is on his 1980 topps card.  cey, like von joshua, dusty baker, and steve garvey, was featured in the batting cage on his card from topps in this set. that kind of repetition makes for somewhat boring pages in my topps dodger team set binder.  still, having this card on the same sheet as buckner's 1974 topps card shows how similar the designs are to one another.

dodger stadium is on display on this 2009 upper deck o-pee-chee card, and it's a beautiful thing.  the stadium got a new address this year, when elysian park avenue was renamed vin scully avenue. it is the third oldest major league baseball stadium, and i hope it stays that way for a long time to come.

last card on the page is mike morgan's 1992 upper deck card with the increasingly rare (and soon to be extinct?) pitcher on the basepaths photo. i have resigned myself to the fact that the dh is coming to the national league sooner rather than later. 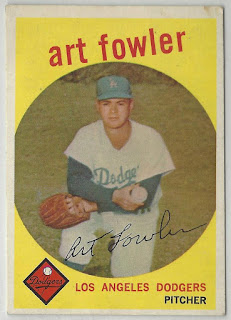 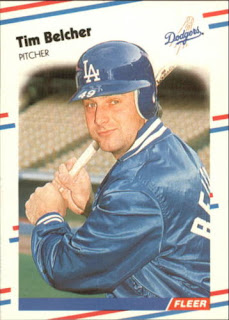 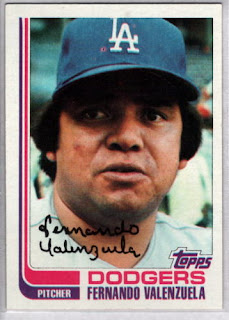 we have two members of the infield on this page, along with a 1978 topps dodger and a card of dodger stadium, but i think my favorite card here is the 1981 donruss steve howe.  1981 was the first time i saw a steve howe card (and his donruss card was the first one that i pulled from a pack), and adding the 1980 nl rookie of the year to my collection was a big deal.  so, this card wins on sentimental value.

why hasn't topps ever put stadium cards in the flagship set? it's not a subset that would work every year, but not even once?  i suppose it has to do with giving up 30 spots on the checklist, but there could have been one year back in the day where we were given a stadium photo rather than a team photo on the team checklist.  still, i do have a few dodger stadium cards, including ones from the topps dodger factory team sets a few years ago.
Posted by gcrl at 9:55 AM