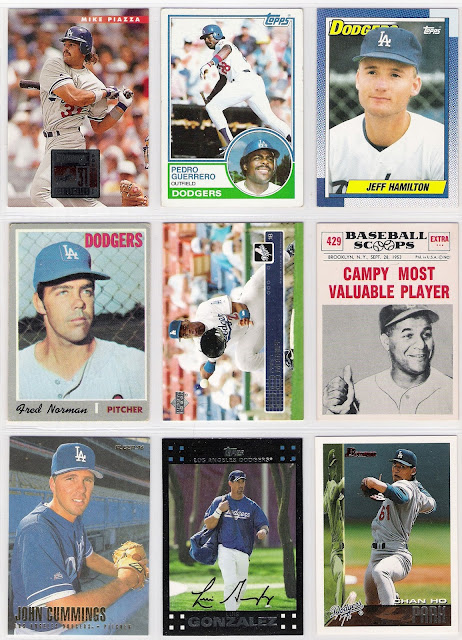 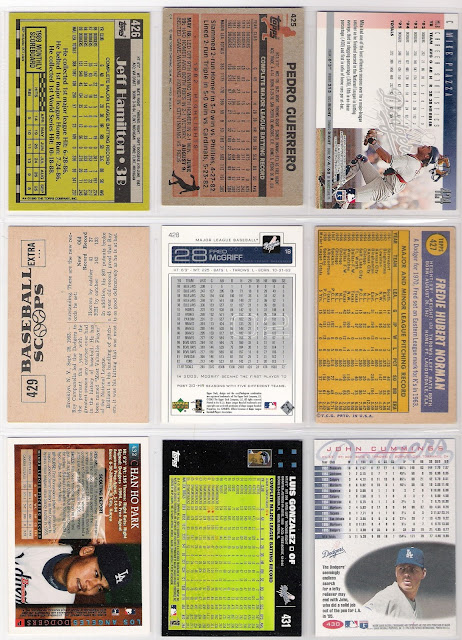 there are no iconic cards on this page, but there are a couple of 'one and done' type cards. i'll go with fred norman's lone dodger card as the one the was a lock for the set.

1996 donruss leads off with their 'black box' design. not one of my favorites. still, this is a mike piazza dodger card, and that's a good thing.  piazza goes into the hall of fame later this month, and i guess i expected to see more piazza cards this year as a result.  there have been some - and even some showing him as a dodger - but i figured there would be more.

i was happy to find this 1983 topps pedro guerrero card in a pack back then because topps had given us two and a third cards of petey using photos of him sitting or standing around.  with everything he was doing on the field, i was looking for an action shot.  plus, there are no worse cards than the 1983 topps cards where both pictures - the main one and the inset - are posed. 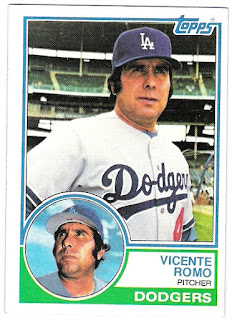 to topps' credit, they did a pretty good job avoiding too many cards like the vicente romo above - at least among the dodgers.

i think night owl is the one who referred to the 1990 topps set as the 'lichtenstein' set.  this helped me appreciate the set so much more.  i'm being serious.  jeff hamilton, on the other hand, is still not one of my favorite dodgers, but he did catch the last out of game 4 of the 1988 world series, so i have some appreciation for him.

the first several times i saw fred norman's 1970 topps card, i figured that the interlocking 'la' logo on his had was akin to an iron on patch due to the vertical line running to its left.  it was quite a while before i noticed that the topps artists had left norman in some other team's (i'm guessing it is a spokane indians jersey - norman played for them in 1967 and 1969) jersey (notice the red patchwork just above the 'pitcher' text) and that his had was colored blue with the 'la' logo being cut and pasted from someone else's photo. it's the only card of norman as a dodger other than his 1990 target card 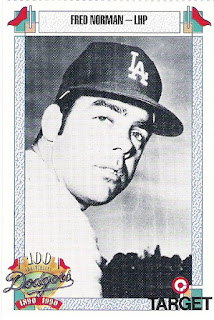 as he was plucked off of waivers by the cardinals during the 1970 season.

kudos to upper deck for making this 2003 fred mcgriff card.  the horizontal layout works nicely with his crouch and the strata of seats in holman stadium. it is my favorite card of mcgriff as a dodger.

it's getting late in the set to be showing an oddball for the first time, but luckily the 1961 nu-cards baseball scoops set was huge.  this is one of a few dodger cards in the set, and it celebrates roy campanella's 1953 season in which he set new records for home runs, rbi, and putouts for catchers and was rewarded with the mvp award for his efforts.

john cummings joined the dodgers during the 1995 season and pitched often enough to show up in the 1996 fleer set.  he had debuted with the mariners in 1993 after making the jump straight from triple-a, and for five innings, he was fantastic.  he had allowed just one hit (a double by cal ripken jr) through and had a 2-0 lead over the orioles in his first big league appearance before allowing five straight hits to start the sixth inning before being pulled. he was used solely as a reliever with the dodgers, and was with the club for about a year before being traded to the tigers.

luis gonzalez joined the dodgers for the 2007 season and was given this card in the topps flagship set. i am happy to report that gonzalez's 2008 topps card showed him as a marlin.  i appreciated gonzalez for getting the series winning hit against the yankees in the 2001 fall classic, but he is on the short list of my least favorite dodgers. it has more to do with him being brought in and blocking matt kemp from getting more playing time early in the season, and then complaining when kemp did play more often later in the year.  with gonzalez gone, i was expecting a full season of an ethier/pierre/kemp outfield, but ned colletti then went out and brought in andruw jones in 2008.

1995 bowman was released on the heels of 1994 upper deck (one of my favorite upper deck sets), and one couldn't help but notice the similarities between the two designs due to the 'phantom zone' inset photo. 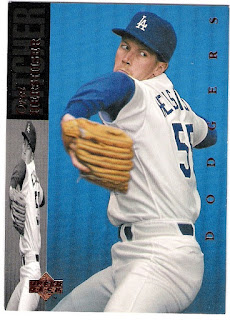 as a result, i've had a bit of an aversion to 1995 bowman except for dodger cards like this chan ho park. 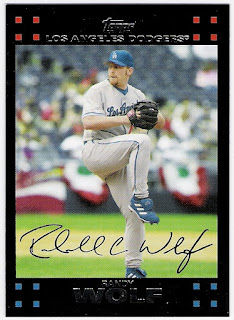 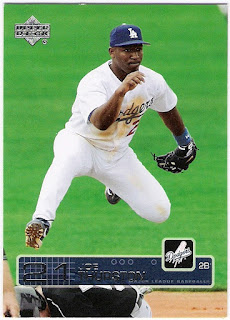 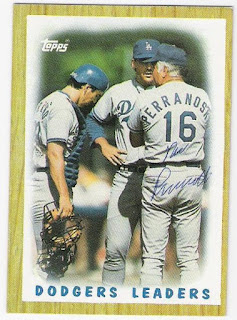 it was nice to finally have an action photo on a topps pedro guerrero card, and the mcgriff card is nice, but oddball roy campanella is my favorite card on this page.

have you seen hamilton? not jeff hamilton - hamilton the musical (the title of this post refers to the opening number where the characters are introduced).  i was lucky enough to see it last year while in new york for a conference. it was fantastic. in a few days, the show's creator lin-manuel miranda (who plays alexander hamilton - the ten-dollar founding father) will leave the production, and i am very interested to see what he does next.  as for me, i've got about 33 more of these posts to go, and i'm not sure what comes after that.
Posted by gcrl at 9:55 AM