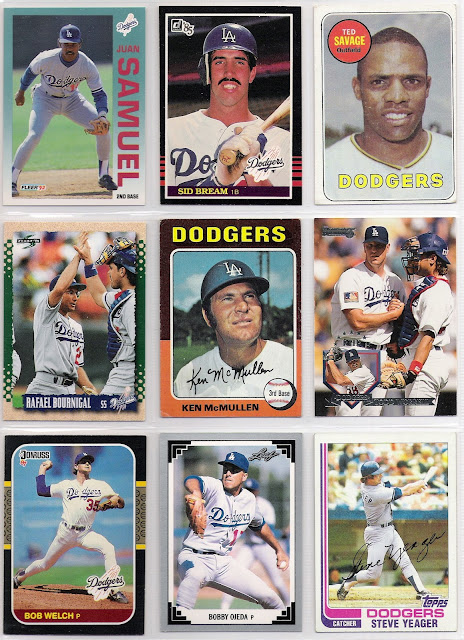 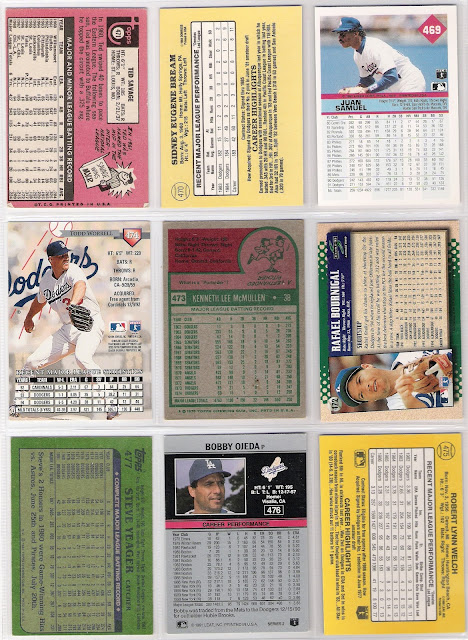 i suppose the closest thing to a no brainer would be the only topps dodger card of ted savage? otherwise, nothing really rises to the occasion here.

juan samuel, seen here on one of his last dodger cards (a 1992 fleer card) gave the dodgers a couple of decent years at second base, but failed to stop the turnstile at the position (he was released during the 1992 season) that began when steve sax left after the 1988 season. since then, the dodgers have had 17 different second basemen start on opening day- one more than the number of different opening day third basemen over the same span.

sid bream did not get a rated rookie card in the 1985 donruss set (tony brewer was the dodgers' rated rookie that year), as evidenced by the lack of the famous logo on his card above, but his cards were in high demand among young southern california collectors nonetheless.  i think that had a lot to do with how disappointed we were with greg brock. bream was traded to the pirates later in the '85 season for bill madlock.

now we are to the ted savage card from 1969 topps.  the card lists savage as a dodger (he had joined the club in april of '68 - thank goodness for cards issued in series rather than all at once), but uses a photo from his time with the pirates, which ended in 1964. in fact, this photo looks like it came from the same session as his 1967 card photo. that card lists him as a cub, but he is clearly wearing a pirates jersey.  i'm not complaining, mind you, as i appreciate topps at least getting the team name right on a midseason acquisition.

rafael bournigal didn't play a single game in the majors during the 1995 season, but he did get a few cards, including this one from score showing him and mike piazza sharing a post game high-five.  bournigal started the '95 season at albuquerque, but was traded to the expos in june and spent the rest of the season in their minor league system.  it was really weird to find out that, despite that trade, topps used him in their pre-production 1996 set. 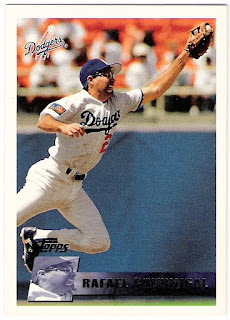 i like to think that if things had aligned better, bournigal's nickname would have been 'jason' (no, i am not getting paid for that movie plug).

the 1975 topps ken mcmullen card is one of my least favorite dodger cards from the set due to the unsightly (in my opinion) color combination topps used. i could never be a cleveland browns fan, i guess.

next up is another card from 1995 featuring the dodger catcher and some postgame congrats. this time, it's closer todd worrell and his donruss card that makes way for the strongest man in socal to join him.  i don't know if this was a ploy by card companies, but i have seen quite a number of double play cards where the player sliding in (who is not the card subject) is a player of note.  as a now limited player collector, i don't mind.  if i still had a separate mike piazza player collection, things like this could get out of hand pretty quickly, as i include lurker and/or cameos in my pc's.

the final card of the page is a 1982 topps steve yeager card. i was hoping for some world series action on yeager's card (or any of the dodgers, frankly), but was disappointed.  it's just another shea stadium batter's box photo. 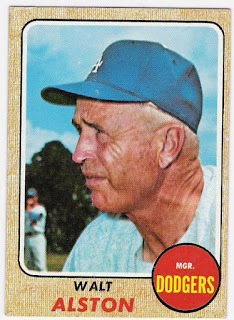 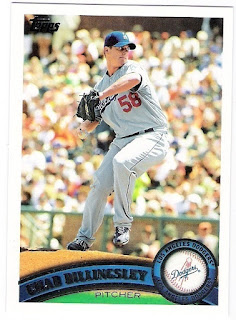 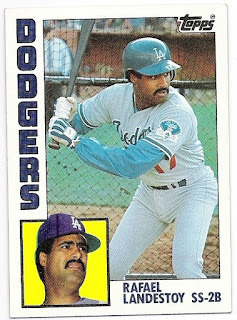 i like the bournigal card a wee bit more than the worrell card due to the high-five as opposed to the arm-wrestle handshake.

looking at these cards, i am reminded that topps did not always put their logo on the front of their cards. take a look at the 1969 and 1975 cards, neither of which have the logo. the '69 has the logo on the back, but the '75 doesn't even have that.  contrast that with fleer, score, and leaf - and then there is donruss, who not only put their logo on the front, but also the year of the card (at least prior to 1995).  that was some revolutionary stuff back in 1981 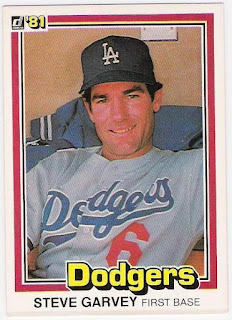 when they began the trend.
Posted by gcrl at 9:55 AM