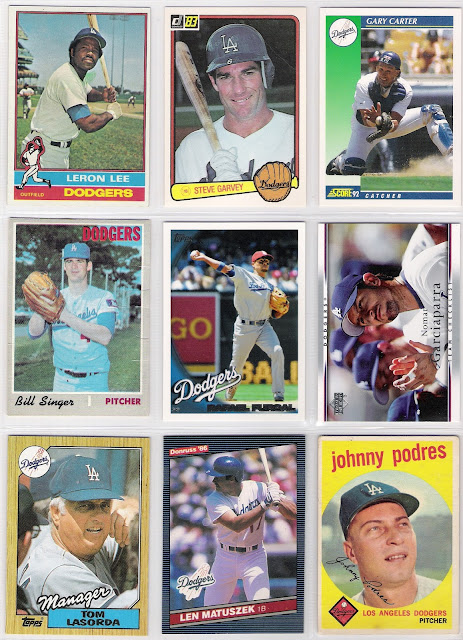 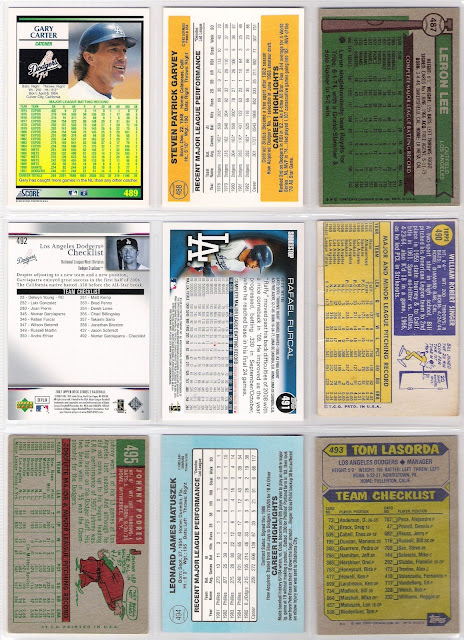 i have no shame in adding as many steve garvey and nomar garciaparra cards as i want to this set, but i also have a penchant for players who have only one dodger card to their name.  as a result, i'd say that the 1976 topps leron lee was as close to a no brainer as this page has.

leron lee came to the dodgers during the 1975 season and earned this card in the 1976 topps set.  although lee stayed with the dodgers through 1976, he did not get any love from topps the following year.  maybe it was because after the dodgers released him in november of 1976, he went to japan and kicked some ass.  in his 11 seasons with lotte, he hit .320 with 283 home runs, which is 283 more home runs than he hit in his stint with the dodgers.

next up is steve garvey's 1983 donruss card. pulling this card from a pack was bittersweet for young gcrl as the garv was no longer with the dodgers when that happened.  gary carter wasn't with the dodgers either when his 1992 score card hit the streets.  i was still happy to have it, as it showed the canadian and american flags that he wore on his helmet. i thought that was a nice touch on his part.

bill singer's 1970 topps card here is a bit washed out. that was the season in which singer was coming off of a career year (he had won 20 games with a 2.34 era while throwing 315.2 innings in 1969), but missed all of may and september, and half of august. he still managed to no-hit the phillies in july, however.

rafael furcal is sporting a special holiday hat on his 2010 topps card.  it's the fourth of july hat from 2009 that the dodgers wore during their series with the padres in san diego. was that the first year of the special holiday hats? i am not a fan of the trend.

nomar is giving a slow clap on (one of) his 2007 upper deck card(s).  perhaps a fan has taken a stand against steamed dodger dogs and demanded that farmer john's eastern corn fed pork sausages be grilled as they were in the beginning.  in all seriousness, i believe that it was around 2007 when the dodgers stopped grilling the famous dodger dogs, and the fans revolted, resulting in both steamed and grilled being sold at the ballpark thereafter.

so it's two pages in a row with a tom lasorda card.  this 1987 card is a checklist, as was yesterday's, although this one is the dodgers team checklist. i mentioned in the post yesterday that i prefer my team checklists to have a team picture on the front, with perhaps a mention of the manager, but just the manager on the front is ok, too.  it beats not getting a manager card at all.

i'm not too excited about another len matuszek card in the set as i have run out of things to say about him. but, there aren't very many 1986 donruss cards here, so it is what it is.  johnny podres brings the page to its end with his 1959 topps card. podres made two starts in the '59 world series - earning the win in game 2 and getting a no-decision in the dodgers' game 6 series clinching win.

cards that i considered, but ultimately did not choose, include 2013 topps hanley ramirez 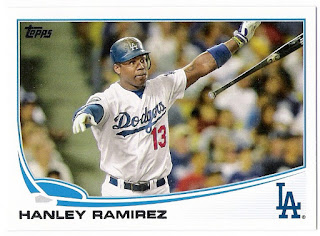 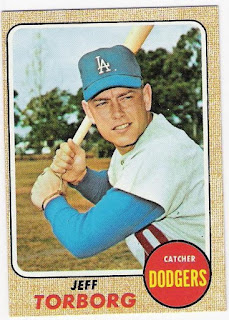 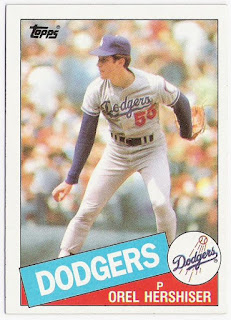 gary carter's 1992 score card is my favorite card of him as a dodger aside from his 1992 o-pee-chee tribute card.  i like it more than any other card on this page, including the garvey.

i've come a long way with my steve garvey collection since pulling his cards out of donruss packs in the early 1980's.  i've not been doing a good job of keeping my collection up to date over at garvey cey russell lopes like i promised about a year ago.  i still plan to re-scan and update that post as i have picked up a number of new garvey cards in the past 12 months.  here's the latest - a 2009 topps tribute dual relic book that also features tony gwynn.

good golly miss molly, it's a fancy card.
Posted by gcrl at 9:55 AM