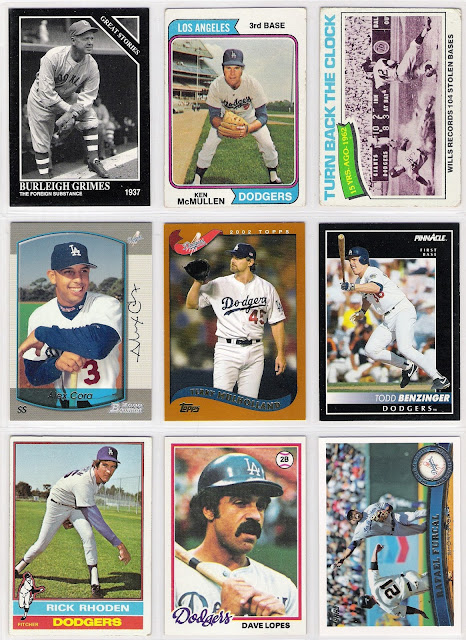 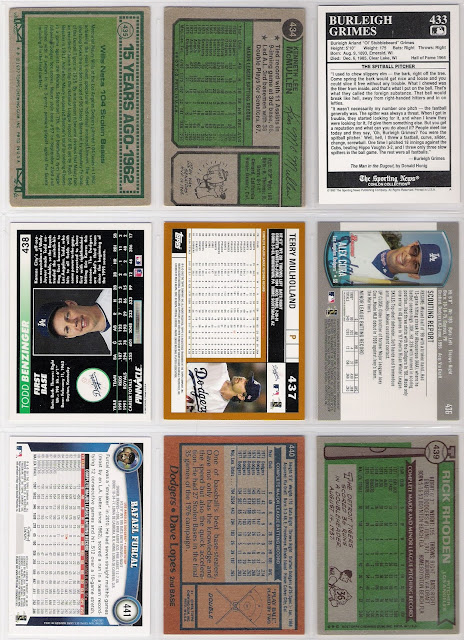 obviously, the 1978 topps dave lopes was a part of this set about 1 second after i started putting it together - it's the first card i ever saw of the second baseman of the infield of my youth.

the purpose of the conlon grimes card is to relay a "great" story to us. with grimes, that more than likely means it will be about the spitball, and it is. apparently, his saliva was tainted with the bark of a 'slippery elm'.  he also wants us to know that he was a pitcher - not just a spitball pitcher.

for the first time in 9 years, ken mcmullen is wearing a dodger uniform on a topps card.  he was listed as a dodger on his 1973 topps card, but is almost certainly wearing an angels jersey.  on his 1965 topps card, he is listed as a senator, but again, i would guess he is really wearing a dodger uni.  either way, this card is the first time since 1964 - his first solo card - that we can definitely tell he is wearing dodger blue.  1974 was a tough year for mcmullen as his wife passed away early in the year (that's why the dodgers wore black armbands the night that hank aaron hit 715).

we haven't seen a turn back the clock subset from topps in quite a while. there was the 'golden moments' subset in 2001 that was kind of the same thing, although not limited to things that happened multiples of 5 years prior. this one, from 1977, went 15 years into the past to celebrate maury wills and his record 104 stolen bases.  it took wills 165 games to reach that total (he had 100 after 162 games), and 3 of his steals came in the final game of the season. tied after the first two games of the three game playoff against the giants, the dodger bullpen couldn't close out the 9th with a 2-run lead, and wills and the dodgers lost the pennant, with old nemesis don larsen scavenging the win in relief.  i am happy to report that the photo topps used is wills' 104th steal of the season, and just after this photo was taken, he ran home to score on the errant throw by the catcher.

not much to say about a 2000 bowman alex cora card, so we'll just move on to terry mulholland's 2002 topps card.  i really appreciate cards like this, so thanks topps.  this card features mulholland who joined the dodgers during the 2001 season in a deadline deal, in an actual photo from his time with the dodgers that season. no airbrushing, no hatless spring training photo, just a real photo. we also know that this image comes from a post-9/11 game due to the flag patch on the side of mulholland's hat.  it's a uniform detail that didn't get much exposure in 2002 sets and so this card stands out.  now, as much as i like this card and the image used, i hope we are not inundated with cards next year featuring photos from this season's july 4 games with what i thought were terrible hats and unis.

i get 1992 pinnacle and 1993 pinnacle mixed up. to make matters worse, both years featured the "idols" subset - one of my favorite subsets of the 1990's.  i know that this card is from 1992, however, because benzinger didn't get a card from pinnacle in 1993 despite playing in 121 games for the dodgers in '92.  of course he only hit .239 over the course of those games, so the only people who missed him were team collectors like your truly.

there was a fair amount of coverage in baseball circles of madison bumgarner batting in an american league park in lieu of the designated hitter the other day.  it's understandable, and the same thing happened when rick rhoden was the yankees' designated hitter in a game during the 1988 season. it's one thing to be a good hitting pitcher on a national league team that doesn't carry a dh and another to be a good hitting pitcher on an american league team that does carry a dh.  i'm sure there were circumstances influencing billy martin's decision, but it was still a notable lineup decision.  as for the card, this 1976 topps rhoden is his first solo topps card, and the one that features the most action - all of his dodger cards produced by topps were posed shots.

did you know that dave lopes was one of my favorite players? that he was the second baseman on the team of my youth? that he is one-fourth of the namesake of my original blog? that the 1978 topps set is my favorite of all time?  probably.  the only thing that could make lopes' 1978 topps card better would be for it to have the all-star shield (joe morgan earned it instead of lopes, who wasn't an all-star in 1977) or for it to feature a double play photo.  lopes finally got one of those from topps as part of an autographed insert set 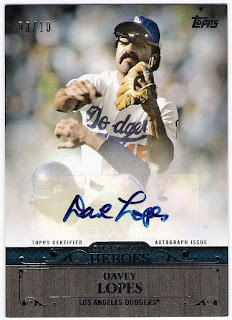 a couple of years ago.

rafael furcal has had a few double play cards, and this 2011 topps card is a pretty good one. the horizontal crop makes for a good dp, and the colorful fence of at&t park adds some flair.  it's too bad that topps changed furcal from a shortstop to an outfielder 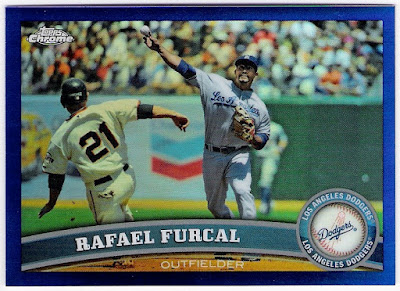 on some other versions of the card.

the options are ever dwindling the higher the card number, but some other cards considered for this page did include 1996 fleer chad fonville at number 433, 2015 topps carlos frias at number 434, 2015 topps original buyback 1958 topps ed roebuck (i do have a double) 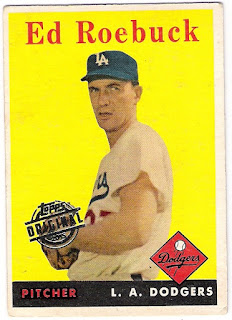 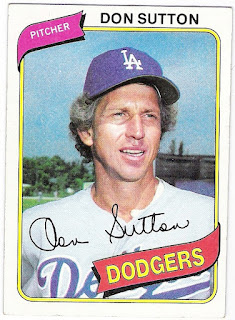 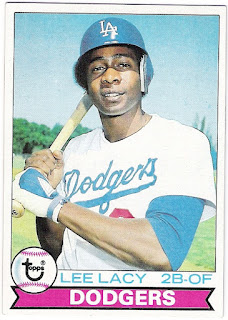 there are quite a few cards that i like here, but my favorite on this page is, somewhat predictably, the 1978 topps dave lopes card.

i chose the wills card over the roebuck pretty easily, even though i am a sucker for those 2015 buybacks.  it's worth noting that roebuck was the losing pitcher in that winner-take-all game in 1962. he relieved johnny podres in the 6th inning with the dodgers down 2-1, no outs, and the bases loaded. he got two groundouts, including a double play, to escape unscathed. the dodgers took a 3-2 lead the following inning and roebuck threw scoreless frames in the 7th and 8th. in the 9th, however, he recorded just one out while allowing two walks and two hits, including an rbi single to willie mays that knocked him out of the game. stan williams and ron perranoski finished out the 9th, but all of the runners they inherited from roebuck scored.  the giants went on to lose the 1962 world series, just as they had done in 1951 after beating the dodgers in extra games to win the pennant.  that's what the san francisco giants used to do in world series - lose. now, i am beginning to really dislike even numbered seasons.

i almost forgot - the title of the post refers to the fact that both rhoden and benzinger wore number 36 for the dodgers, and both lopes and furcal wore number 15.  there should be no surprise that i consider rhoden and lopes as the keepers of those numbers in dodger lore, even though the likes of don newcombe, frank robinson, and greg maddux all wore 36, too.  that's the power of the team of my youth.
Posted by gcrl at 9:55 AM