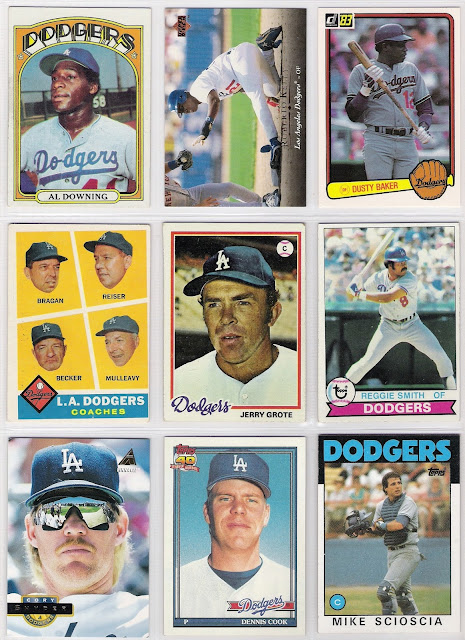 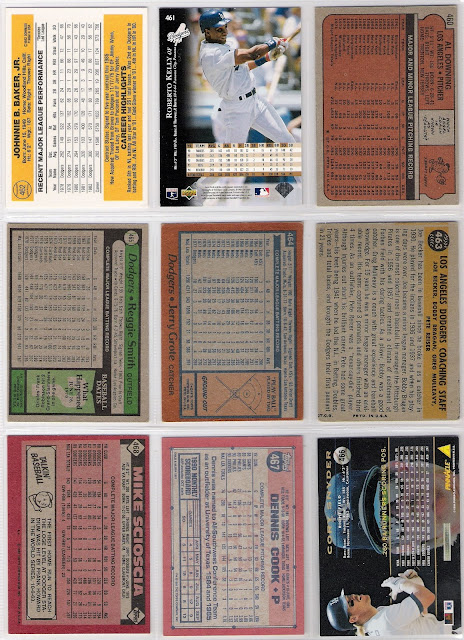 the coaches. no doubt about that one.

the 1972 topps al downing card is his first dodger card - at least, the first to show him in a dodger uniform. he also shows up on a league leader card in the 1972 set.  i was thankful to see this card and recognize it as a legitimate dodger uni, not an airbrush or hatless job. maybe being a 20-game winner gets you some respect from the card makers.

i believe the 1995 upper deck roberto kelly card that comes next in the frankenset is a 'trade' redemption card.  i don't quite recall how it worked - whether there was one redemption for all 45 cards, or several redemption cards for a few apiece, but i do recall getting at least some of the cards that way, including roberto.  speaking of trades, kelly was looking to be the next big thing in center field for the yankees until he was unseated by bernie williams.  so, the yanks sent him to the reds in exchange for paul o'neill.  other trades followed - kelly was dealt to the braves for deion sanders and then to the expos for marquis grissom. the dodgers picked him up from montreal in the henry rodriguez deal.

next up is dusty baker's 1983 donruss card.  following the bat and ball design of 1982, donruss came up with a similar bat and glove design in '83. i figured that 1984 would bring a bat and hat design, but donruss went rogue and gave us the postmark design - still my favorite donruss design of them all.  i guess they knew when to cut bait with a design theme.  i wonder if upper deck intended their trip around the bases to take four years, from 1989 through 1992, but went from second to home in 1991 so they could move on to a completely different design in '92.

and now we have the star of the page. thank you topps for making coaches cards in 1960.  it took them 13 years to do it again (and they did it in back-to-back years in 1973 and 1974), and we haven't seen them since in the flagship set.  these fine gentlemen are bobby bragan (third base coach), pete reiser (batting coach), joe becker (pitching coach), and greg mulleavy (first base coach). bragan and reiser were teammates on the dodgers in the 1940's (bragan famously wanted out of brooklyn in 1947 when jackie robinson made the team, but had his mind changed after watching robinson play and interacting with him as the season progressed).  becker was one of those catchers turned pitching coaches, and mulleavy was a near-career minor leaguer who served as a coach, scout, and minor league manager for the dodgers.

after missing out on a card in the 1977 set due to his intent to retire, jerry grote was back in 1978 - complete with an airbrushed dodger hat. he had joined the dodgers during the 1977 season after deciding to keep playing and returning to the mets to start the year. i remember grote best for being on deck in game 4 of the 1978 nlcs when bill russell won the pennant with an rbi single driving in ron cey. grote was there to greet the penguin, and i used a photo from that moment to create a card 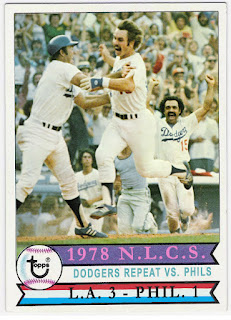 that should have been a part of the 1979 topps set.

one card that was in the 1979 topps set was this one of reggie smith. i was pleased to see it back then as it was one of the first dodger cards i saw that year that featured an in-game photo.  it lost its appeal quickly, however, as topps used pretty much the same photo for smith in 1980 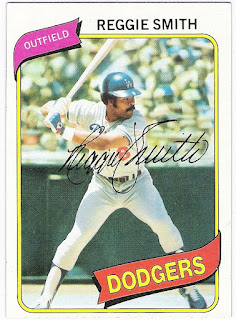 and on his 'in action' card 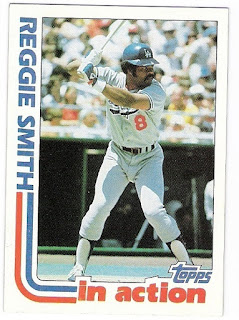 cory snyder is wearing the oakley-type shades on his 1994 pinnacle card that got phil nevin into trouble with some of his teammates. i guess some astro veterans took offense to the number one pick in the draft wearing those sunglasses as a rookie, even though he had worn them in college.  nevin had been drafted by the dodgers in the 1989 draft, but did not sign.  if he had, maybe he and cory snyder would have bonded over their choice in sunglasses.

dennis cook arrives on his 1991 topps card, which is not as interesting as his 1991 upper deck card. 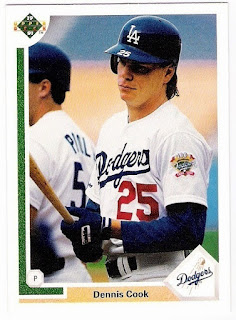 cook gave up just one earned run in 17.2 innings pitched in '91, and that earned him a trade to the indians.  it just so happens that it was gary carter, and not mike scioscia, who was behind the plate the day cook allowed his only run of the season (actually mike hartley allowed terry pendleton, whom cook had walked, to score).  scioscia's 1986 topps card wraps up this page in the frankenset.  that particular card marked the fifth year in a row in which scioscia was depicted on his topps flagship card in the tools of ignorance. topps would give him a break in 1987 and 1988 with photos of him at the plate, before returning to the catcher gear photo in 1989. 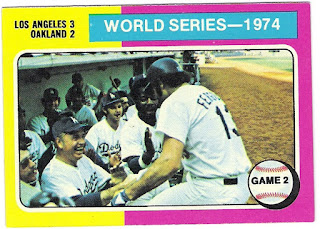 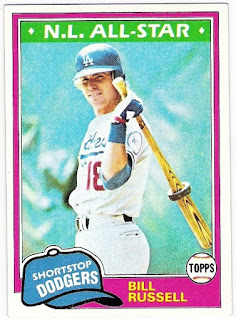 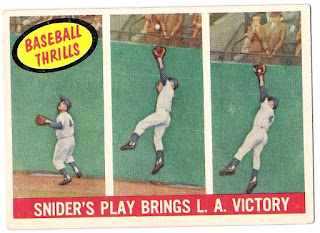 when the coaches are present on cardboard, nothing else comes close.  should topps ever make this a more regular thing, the novelty will wear off and cards like this will become less special.  however, even if that time comes, the 1960 topps coaches card will still be my favorite on the page.

hopefully this post shows up with the cards centered. i noticed yesterday that for some reason, all of my posts on this blog had all of the images aligned to the left even though they were all originally posted with them centered. i didn't change anything in the way i post or upload card images, and i don't speak html, so i have no idea what happened.  if it's not showing up the way i hoped, i could use some help in figuring things out.
Posted by gcrl at 9:55 AM