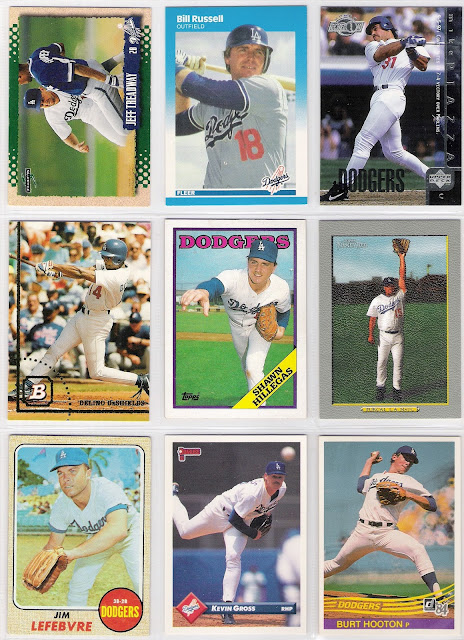 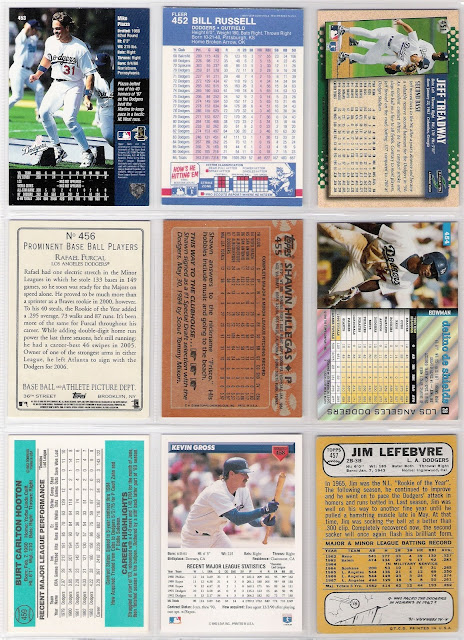 i suppose the 1987 fleer bill russell 'final tribute' card is about as close as we get to a no brainer on this page.

i think the 1995 score treadway would have worked better as a vertical card. at least that way, terry shumpert's head wouldn't have been cut off. bill russell's elbows might be cropped out of the photo on his 1987 fleer card, but with the angle of the image we get somewhat of a 'hero' shot on russell's final fleer card.  the shortstop of the team of my youth played in his last game in 1986, and i am pleased that two of the three major card companies (shame on you, donruss) came through with final tributes in 1987.

mike piazza had 7 cards in the 1998 upper deck set, not counting inserts.  all but one of those show piazza as a dodger, with the last having both a mets and marlins version.  so, all of the piazza cards in this set remind me of the trade that sent the strongest man in socal away.  i don't know what the 'upper echelon' foil on the front of this particular card from that set is all about, but i do appreciate the photo on the back. with all of the boring spring training photos we've been subjected to since the beginning of card creation, it's nice to see a different aspect of the dodgers' time in vero beach.

delino deshields looks a little washed out on his 1994 bowman card which makes me think of all the times that i heard vin scully refer to the 'shirtsleeves' crowd when a fielder missed a line drive.  shawn hillegas's 1988 topps card, however, makes me think of the fact that hillegas was traded to the white sox during the 1988 season, and so he missed out on, to paraphrase scully, the impossible happening.

next up is rafael furcal on a 2006 topps turkey red card.  furcal is displaying the worst pose ever used on a baseball card, in my opinion.  in the interest of full disclosure, however, there is a photo of me somewhere at my parents house wherein i am displaying the same unnatural baseball pose while standing in front of the outfield wall at dodger stadium.  ah, camera day.

speaking of poses, jim lefebvre's pose in the photo used for his 1968 topps card is different than the type of pose we usually see from infielders in that he has his glove turned the other way.  just an observation.  another observation i have is that the pitch kevin gross has thrown on his 1993 donruss cards looks like it is going to be high, but it is hard to tell for sure.

the last card of the page is a 1984 donruss burt hooton card that catches him throwing his signature knuckle-curve, along with his lean.  check out that grip!  and, is there another pitcher that leans back the way hooton used to? i can't think of anyone off the top of my head. 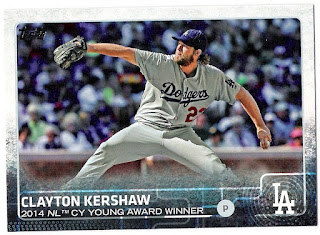 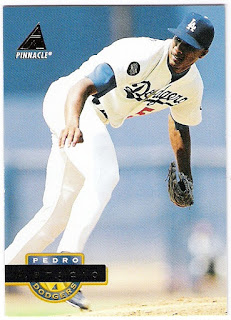 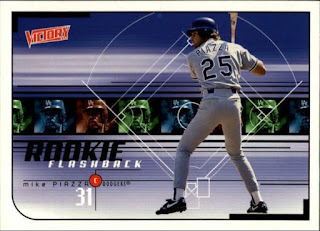 since the piazza card makes me kind of sad, i'll say that the russell card is my favorite of these nine cards.

the all-star break is here, and the dodgers have been playing well as of late.  unfortunately for us dodger fans, so have the giants.  i am hoping that kershaw is able to return right after the break, and also that corey seager doesn't lose his swing by participating in the home run derby.
Posted by gcrl at 9:55 AM