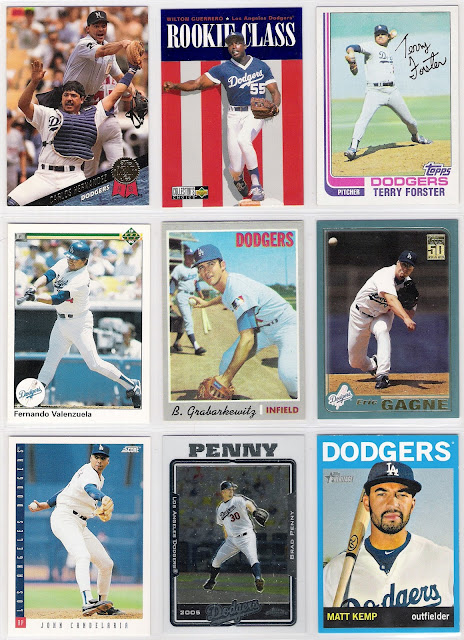 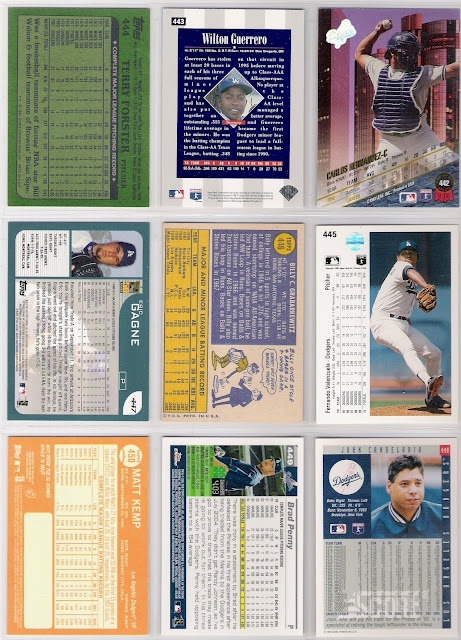 it may not be a no brainer, but the 1990 upper deck valenzuela card is the closest thing this page has got.

one thing that i've noticed with most of the cards on this page is the cropping of the photo. that's what i will focus my commentary on, starting with the 1993 leaf carlos hernandez card.  hernandez himself is relegated to the bottom half of his card, but that is so that we can see the full body of the umpire emphatically calling the runner out at the plate.  too often the umpire is cut off mid torso and just becomes background noise. here, the ump is part of the story that the card is telling.  i like it.

the 1996 collector's choice wilton guerrero card doesn't have much of a photo, thanks to the patriotic background, but there is enough to appreciate the folks at upper deck for leaving in the base (presumably second) that guerrero is stepping on, as well as cropping the image so that his right hand is still in the frame.

topps can and has manipulated facsimile autos, so it seems unlikely that the 1982 terry forster card was laid out specifically to accommodate a stacked auto. i appreciate the action photo and full body shot though.

upper deck maximized the photo of fernando valenzuela at the bat on his 1990 card without losing any body parts (except for his right foot behind the logo) or the bat. i like the way his left foot looks to be aligned with the border.

there are other things to discuss regarding billy grabarkewitz's 1970 topps card than the cropping (which leaves something to be desired) like the fact that his name is too long to fit with this design, and the image used looks like it could be used in an austin powers skit. danny ozark walked into the shot at exactly the wrong time.

eric gagne's 2001 topps card features a photo cropped so that the baseball is visible. i generally like these sorts of images.

john candelaria's 1993 score card also does a good job of giving us a full view of him in delivery mode. i remember candelaria as a slinger, and the way his arm is positioned certainly seems to imply that his delivery is less than three-quarters.  i don't remember brad penny that way, but on his 2005 topps chrome card he doesn't seem to have his right arm positioned to throw from over the top unless he pulls a rick sutcliffe type move.  when i tried to pitch like sutcliffe, it felt like my arm couldn't catch up with my body so i typically was closer to what terry forster is doing with the elbow up.  if you'll recall, 2004 topps really went after the full body shots, and 2005 topps had a few as well, such as the image used for penny's flagship and chrome cards. i appreciate the fact that it is more tightly cropped than many of the 2004 cards.

last up is the walmart blue parallel of matt kemp's 2013 topps heritage card. it was easier for me to find a double of this insert than the regular high number base. this is the last insert of the frankenset, i believe. topps did well, i think, with the 2013 heritage set. kemp's head barging into the header is consistent 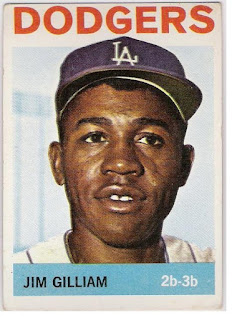 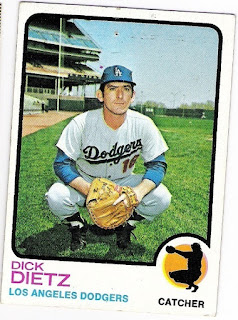 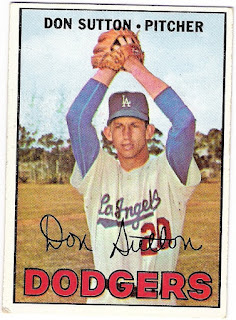 the 1990 upper deck fernando valenzuela wins. it may well be my second favorite fernando card from his playing days, right behind his 1991 topps card.

mentioning forster's facsimile signature above got me thinking. i hope topps is done putting these things on cards (other than heritage and archives which pay homage to past sets). i believe 2008 was the last time they showed up in flagship.  let's keep it that way, as they often get in the way or are totally undecipherable.
Posted by gcrl at 9:55 AM