frankendodger sheet 9 (cards 73-81) - i know that fernando is already in the set, but that's not a fernando card... 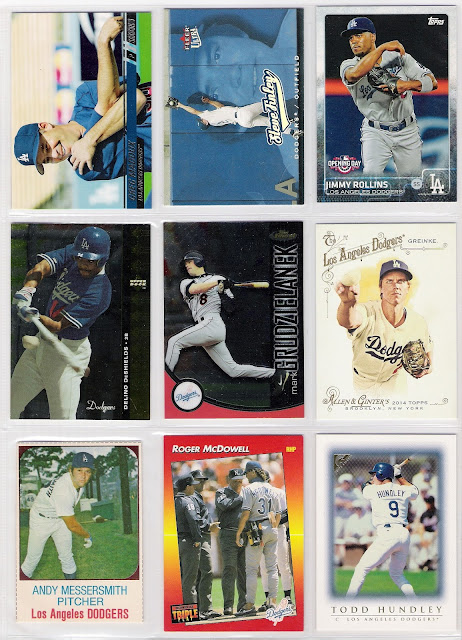 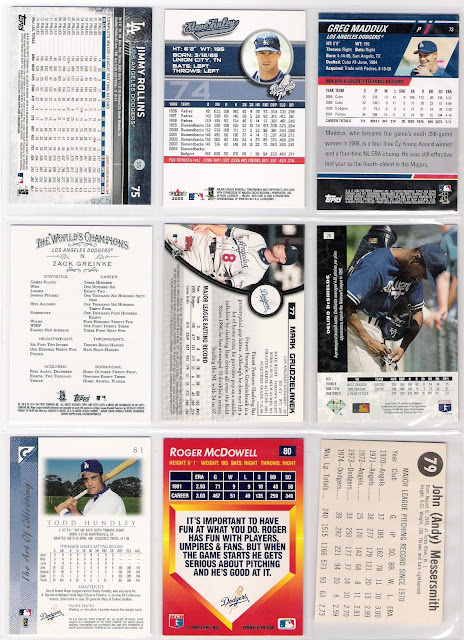 you know i love the murals on the outfield wall at dodger stadium, so it's got to be the finley card.

there are three dodger double dippers on the page (maddux, messersmith, and hundley), plus a couple of shiny cards (deshields and grudzielanek).  the maddux card is probably my favorite of him as a dodger, and i am glad that finley has such a great card from his short time as a dodger - i just wish he had at least one card that documented his division clinching grand slam for the team.

the jimmy rollins card joins the 1985 leaf/donruss orel hershiser card(s) to be an almost double in the set.  jimmy's regular 2015 topps card checks in a bit later, and it's pretty much the same card as this one. deshields and grudzielanek share the distinction of being former expo infielders to join the dodgers in the 1990's. both were all-stars in montreal, and the dodgers gave up wilton guerrero, ted lilly, and a minor leaguer to get gru (plus carlos perez). we all know what the dodgers gave up to get deshields.  the greinke card is here because it fits. it's pretty much filler.

the best thing about the messersmith card (other than it's general hostess greatness) is that he's wearing a batting glove while simulating a throw.  would have been nice to have a card with him holding a bat, if in fact that is why he was wearing the glove.  there are other roger mcdowell cards that i like better than this triple play card, but it fit the set and if he's going to be in the set, it might as well be one of his less-silly cards.  if wearing a toolbelt on the mound counts as less-silly.

finally, it's interesting to see a card showing hundley batting from the right side.  he was a switch-hitting catcher, but for his career, hundley hit just over .200 (.204) as a righty, and he may have given up switch hitting at the end of his career if i recall correctly.  even though his first stint with the dodgers wasn't too bad from a power perspective (he hit 24 homers in both 1999 and 2000), dodger fans were used to much higher batting averages from their catcher at that time. 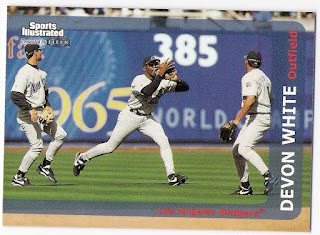 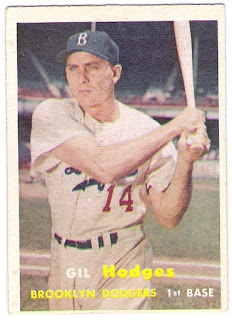 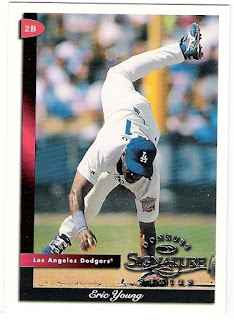 once again, the no-brainer card is also my favorite. kudos, fleer.

one reason i noted those near misses at #75 was to note that they are cards that appear in consecutive years of players from the same team.  for card companies that seemed to randomly assign card numbers, it seems like this happens fairly often (or maybe i have just noticed it a few times).  it makes sense, as i think i might have defaulted back then to the previous year's checklist to create a new one to make sure things are pretty equal as far as team distribution goes, and then maybe swap the numbers to mix things up. i wonder if that's what happened, with some number/team assignments not being switched, or if i'm imaging things. probably the latter.
Posted by gcrl at 9:55 AM