frankendodger sheet 8 (cards 64-72) - a very pleasant good morning to you, wherever you may be... 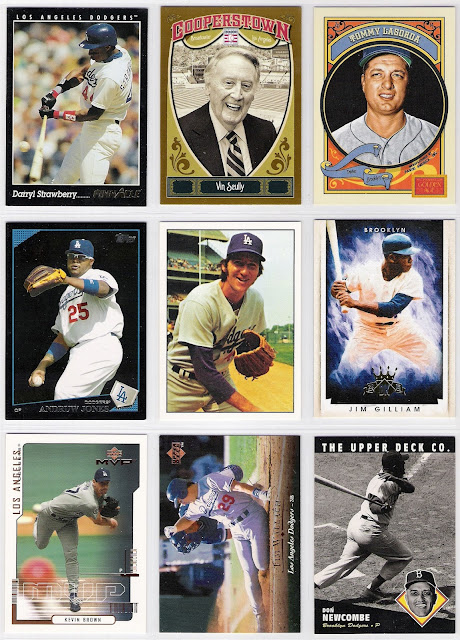 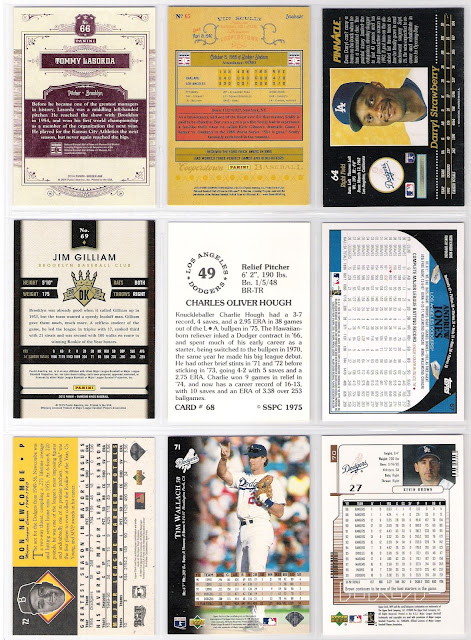 aside from a couple of steve garvey cards, there is probably not a bigger no-brainer in this set than vin scully's card at number 65.  topps has made a couple of cards of announcers, along with at least one of a public address announcer, but no scully card to date.  i am really hoping that with the topps now set, they will make one for at least one of the nights that the dodgers will be honoring him this year.  and, if that's the case, scully would probably get a second card in the frankenset.

there are three unlicensed cards on this sheet, and the lasorda is the worst of them, although i do wish jim gilliam's arms were a bit higher so that it weren't so obvious that there is no team name on the front of his jersey.  gilliam, like lasorda, was a dodger lifer. he was a coach following his playing days, and he helped the infield of my youth become the infield of my youth.  it bears repeating that his number 19 is the only number retired by the dodgers for a player/coach not in the hall of fame.  lasorda's number is also retired by the club, but he is enshrined in cooperstown as a manager.

scully is also a hall of famer, and i wonder what (if anything) the dodgers might retire in vin's honor at the end of this season.  the cardinals have jack buck as part of their outfield mural, and the giants used (do they still have them?) the ny logo for players that didn't wear numbers - a tactic that could work for scully, i suppose.  we'll just have to wait and see.  i'm in no rush to get to the end of his career.

there are better darryl strawberry cards than the pinnacle card i used, but not at number 64.  the andruw jones card is one of a couple parallels that make the set (figures i would have doubles of the walmart black version of this card, but not the regular base).  charlie hough was the closer (one of them, anyway) on the team of my youth which is odd for a knuckleballer, but he looks happy on the sspc card and i am glad to have another player from the 1978 dodgers in the set.

the kevin brown card kind of reminds me of that 1976 topps tom seaver record breaker card due to the generic looking red helmet in the foreground of the card.  in the 8-spot on the page, we have a tim wallach card that won't be going to new mexico anytime soon (i do have some others that will be headed to a certain lawyer out there), and the last card on the page is perhaps the best card from the 2004 upper deck all-time heroes set.  newk was a good hitting pitcher (he hit .271 over his career), and it's nice to have a card showing his style at the plate.  he will turn 90 in about a month's time, and his presence around the club for the last few decades puts him in the manny mota territory of will they/won't they waive the hof requirement (as they did for gilliam) and retire his number.  i would guess it is less likely that newcombe's number is retired since he has not been in uniform the way mota was for all those post-playing days. 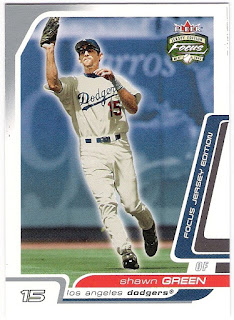 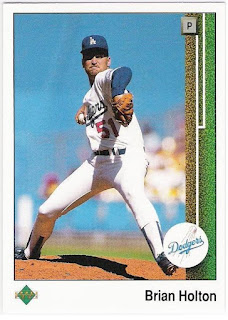 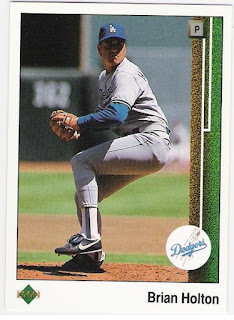 that last one didn't stand a chance against newk's card, and i have a better known player swap later in the set.  i also originally had planned to put a different jim gilliam card (his 1995 topps archives brooklyn dodgers 1954 topps reprint card) at #69 but went with the panini card instead.

it's vin, without a doubt.

i've been watching a bunch of dodger home games through my mlb.tv subscription this year to get my vin scully fix, which means i've been very tired on several mornings.  i missed vin's dissertation on beards, however, so had to check that out on deadspin.  what a treasure, indeed.
Posted by gcrl at 9:55 AM