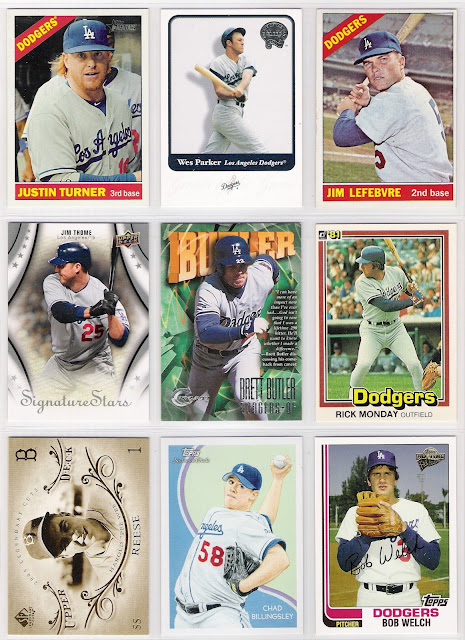 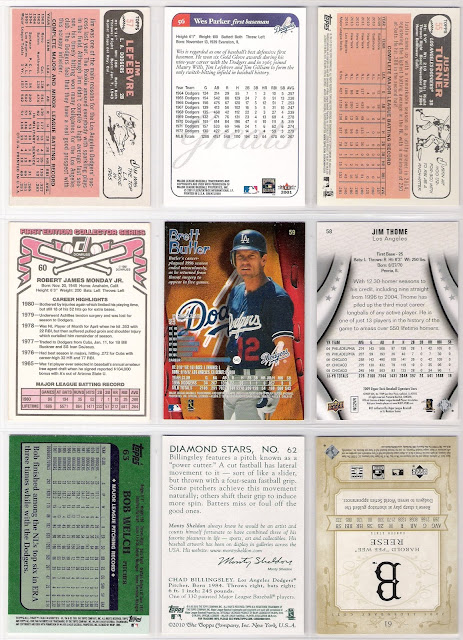 i've written before regarding my affection for the 1966 topps jim lefebvre, so it was definitely on the must include list for this set.

one of my guidelines for this set is not to repeat the same set on any sheet.  that guideline is violated near the end of the set, but not here - even though it looks like there are two 1966 topps cards.  thanks to the heritage set, both justin turner and lefebvre appear on this sheet with the same design.  it's too bad turner isn't striking the same pose as lefebvre, though.

in between those two is a fantastic card of gold glove extraordinaire wes parker.  i am a fan of the 2001 fleer greats of the game set, and am just now getting around to posting a want list to complete it.  the thome card is somewhat forgettable, but the circa brett butler card has a superhero quality to it due to the colors and the 'butler' text.

i opened a bunch of 1981 donruss, and remember buying a brick of dodger cards from a fellow collector that summer.  as a result, i had a ton of dodger doubles - many of which i still have today.  monday gets to represent that set in the early going.

i'm not much of a fan of the 2005 legendary cuts set, but pee wee fit nicely here, so there it is.  i do like, however, the 2010 national chicle set, and this billingsley is a pretty decent card to rep that set.  i know there is at least one other card from that set later on.

finally, the welch.  he had a decent year in 1982 (16-11 with a 3.36 era), but i first thought that the point of the 2005 all-time fan favorites set was to use the card design from a player's best season (i later figured out that it wasn't), and 1982 wasn't it for welch. he had some better years, but i really wanted to see him on a 1978 design, if not on a card recognizing the awesomeness of his game 2 strikeout of reggie jackson in the 1978 world series. 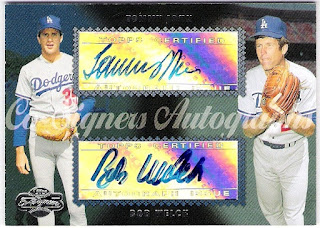 well, there's the lefebvre which is clearly my favorite card on this page.  but visually, there is something about 2001 fleer greats of the game cards that i really like and the butler card is the star of the page the way it jumps out at you, so it was more difficult to stick with the 1965 rookie of the year than you might imagine.

look at all that potential energy on display on the monday card! enough to hit a home run in olympic stadium and dash the hopes of expo fans, anyway.
Posted by gcrl at 9:55 AM