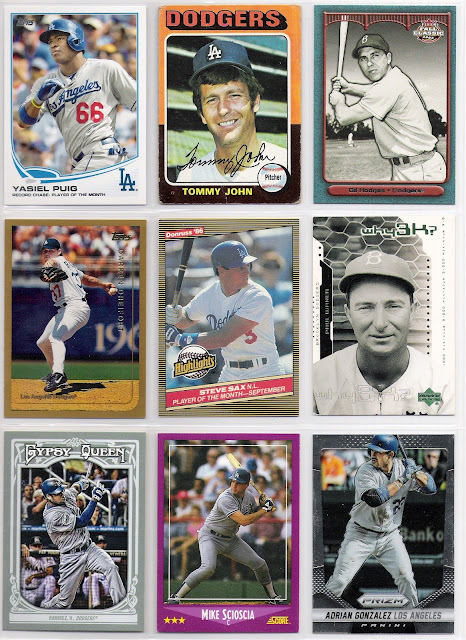 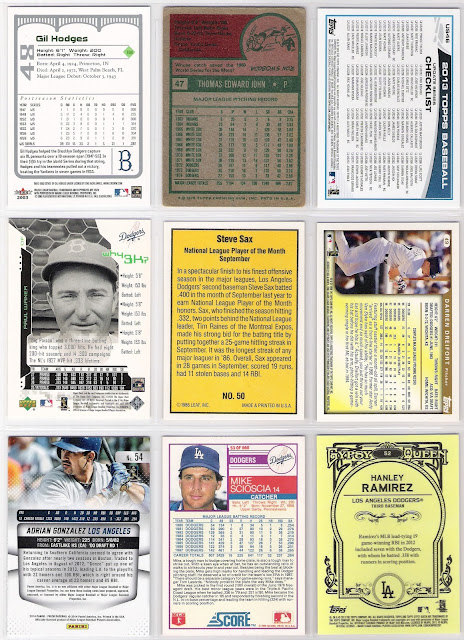 getting a card of paul waner (aka big poison) into the set was a good thing. as i was looking through doubles, his card jumped out to me and was the first card identified for this page.  waner, who was a dodger double dipper, actually got his 3000th hit while in between his dodger stints, but i'm pleased that upper deck included him in this set as a dodger.

anybody else not a fan of the 2003 fleer fall classic set?  i completed the set back in 2003, but did not care for the number of different designs fleer used in the set.  other sets have had different looking base cards, although the different looks are usually just color based, like the sets that produced the tommy john and mike scioscia cards on this sheet.  still, this card of gil hodges fits in nicely.

speaking of john, he looks pretty happy for a guy who just blew out his elbow.  and, speaking of blown out elbows - hello, darren dreifort.  i like little d's card because there are few things better for a baseball fan than a sunny day spent in chavez ravine.

the steve sax card is interesting to me, as i like the idea of this sort of set.  i think topps is doing it right this year with the topps now set, although i doubt that they will produce player of the month cards. in september of 1986, saxy hit .400 in 28 games and had a 25-game hitting streak to earn the honors and the right to have this card made.

the other cards - puig, hanley, scioscia, and adrian gonzalez all feature the away grays. at least puig's card showcases the red number.  the hanley and scioscia cards feature photos that don't allow the number to be seen, and panini likes to color that number blue for some reason.  plausible deniability, i suppose, should their cards ever be questioned as to being too easily identified by team.

there are still a lot of great cards to choose from at this point.  some of my favorite also rans from this sheet include numbers 46 1976 topps dodger team/walt alston and 1997 pinnacle zenith wilton guerrero (from a set that i really like); number 47 2002 topps tribute jackie robinson; numbers 48 2002 topps tribute gil hodges (it would look better than the hodges card currently in this spot) and 2016 topps opening day corey seager; numbers 49 2002 fleer greats steve garvey and 2013 panini hometown heroes orel hershiser; numbers 50 1977 topps ron cey, 1979 topps steve garvey and 1981 topps davey lopes (sadly, i don't think there is a bill russell card numbered 50); number 51 1960 fleer dazzy vance; number 52 2011 topps marquee matt kemp (featuring the sweet baby blue brooklyn throwbacks); numbers 53 1957 topps clem labine ("that's a $20 card!"), 1998 fleer ultra mike piazza (i can't believe i never posted this card at garveyceyrusselllopes), and 2003 fleer ultra gold medallion edition kevin brown; and number 54 2007 upper deck masterpieces jackie robinson (with yogi berra and the late tag at home in the 1955 world series).  like i said, lots of good stuff to choose from, if only i didn't have rules.

i'll go with the 1999 topps dreifort due to the appearance of the dodger stadium outfield wall mural in the background. one of my favorite posts over at garveyceyrusselllopes was about the different murals that the dodgers put on the wall in the late 90's/early 00's before advertising took over.

i think the puig is the first checklist card to make the set, although it won't be the last.  and, is there a more useless set than panini prizm?
Posted by gcrl at 9:55 AM