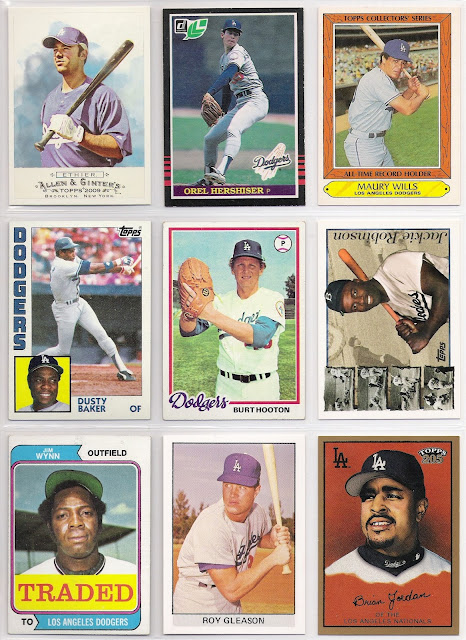 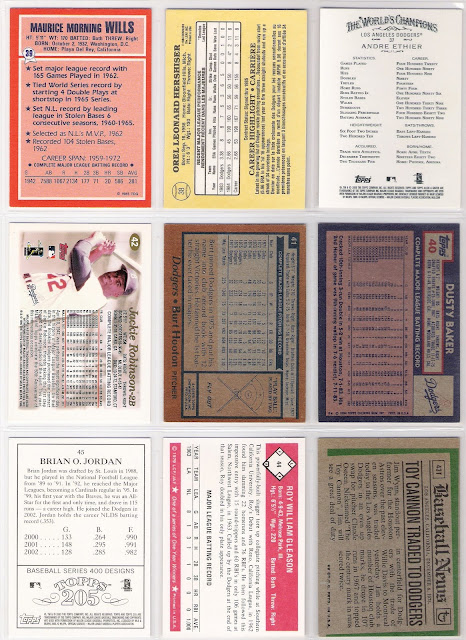 today's no brainer is the roy gleason card.  it's one of very few cards that the former dodger and army sergeant has had.  gleason appeared in a recent tristar obak set, but without the logos that are so visible on the fritsch card.  i still sponsor gleason's baseball reference page, and i would encourage you to learn about his story.

the hershiser card is one of his rookies, and it is the first card in this set that will be repeated later on.  that is to say, the 1985 donruss card of hershiser, which is identical to this one except for the leaf logo, will show up in a future post.

also showing up on this page are the left fielder of the team of my youth (dusty baker), as well as the first representative of the 1978 topps dodgers, burt hooton.  and there is, of course, jackie robinson at card number 42.  1997 was the first year that there wasn't a number 7 in the topps set. they had included a mickey mantle tribute type card in the 1996 set, and jackie received a similar card the following year, which was the 50th anniversary of his debut.  baseball retired number 42 that year, and i don't know if that decision had already been made when topps put together the checklist for the 1997 flagship set. it's a nice touch to put jackie there either way.

the brian jordan card is there by default due to the restrictions i put on the first 20 pages. it's probably my least favorite card in the set so far.

some of the cards that were considered but cut due to either the lack of a double or the aforementioned rules and regulations i established for the first 20 pages of the frankenset include: 2006 upper deck sp legendary cuts kirby higbe (#37), 1989 swell baseball greats jose morales (#38), 2009 upper deck goudey 4-in-1 matt kemp, rafael furcal, andre ethier, russell martin (#39), 1963 fleer tommy davis (#40), 1979 tcma the 1950's duke snider, gil hodges, roy campanella, carl furillo (#43), and 2005 topps all-time fan favorites dusty baker (#44).  i considered that baker card until i found the gleason - i had to buy two copies of the gleason to get it into this set, one of the few times i did that to get a specific card included as part of the frankenset.

there are lots of cards here that i like (8 of them, to be exact), but i'll anoint the gleason card (over the 1978 topps hooton) as my favorite.

before anyone makes an issue of it, i will say that i put this set together ignoring the 't' in traded sets or the 'uh' in the latter-day update & highlights sets and the like.  it's the card number that matters, and i was happy to include the toy cannon and his 1974 topps traded card on this sheet.
Posted by gcrl at 9:55 AM