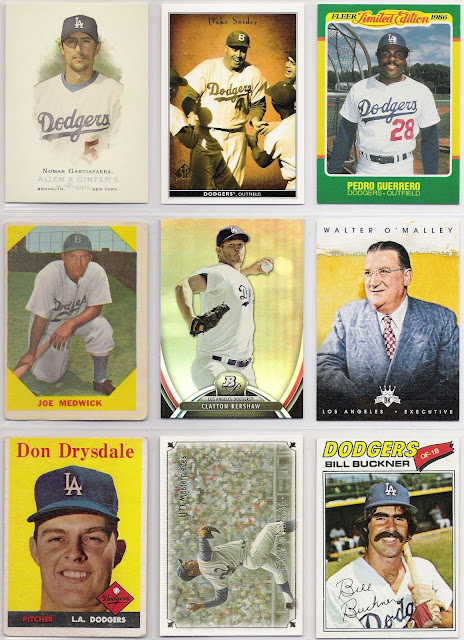 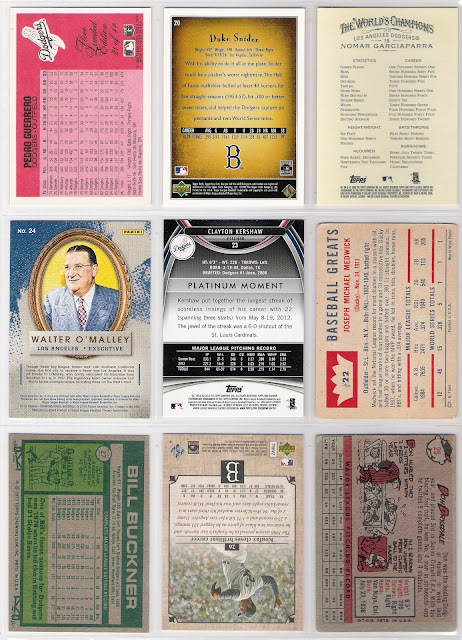 as soon as i received a second 1960 fleer joe medwick card in the mail from a trader, i knew that it would be in the frankenset.  however, the no brainer of the day has to be the card at number 24.  i was all set with a 1989 topps woolworth's kirk gibson card at 24 until i saw the checklist for this year's panini diamond kings release.  i have long wanted a card of former dodger owner walter o'malley, and so he bumped gibby to the second page and jody reed out of the first 20 pages (at least).  without o'malley, i might be an angel fan.

you can't have big d debut in the set without sandy right next to him, so i was happy to see those two hall of famers fall out back-to-back.  as luck would have it, i had a double of drysdale's 1958 card to clinch the deal.

adding o'malley to the sheet puts the hall of famer count among these nine card subjects at 4, with a fifth quite likely at his current pace.  i am a bit embarrassed to say that i have not seen kershaw pitch in person yet, but i plan to rectify that this year or next at the latest.

finally, the 1977 topps bill buckner card is significant to me because i began watching baseball in 1977 when billy buck was on the cubs. the first card of his that i saw was his 1978 topps card, and so found out he had been a dodger by reading the stats on the back.  seeing his 1977 topps card for the first time was somewhat of a 'what might have been' moment for me as a kid.

you'll note that the orientation of the backs are all over the place.  it's not that big of a deal for the cards that feature a portrait photo on the front, but that landscape koufax causes problems.  i subscribe to the 1978 topps orientation for horizontal cards, and so the koufax goes in the binder that way.  unfortunately, upper deck thinks differently, and we wind up with upside down text on the back of the sheet.  oh well.

most of the cards that are on this page were sure things, so there wasn't much hemming and hawing about which cards to choose.  i would say that the eligible cards that came closest to upsetting the final roster were a 1986 topps woolworth's bill madlock card at number 19, tom goodwin's 1992 upper deck card at number 20, charlie hough's 1978 topps card at 22, the aforementioned gibson card at 24 (of course), and jackie robinson's 2000 upper deck legends card at 27.

as happy as i was to see the o'malley card, my favorite here is a toss up between the nomar and the koufax.  from a pure card standpoint, i'll go with sandy (really, that card is pretty much perfect), as my affection for the nomar card has more to do with the fact that it was one of his first to show him in dodger blue.

i really like this page.
Posted by gcrl at 9:55 AM