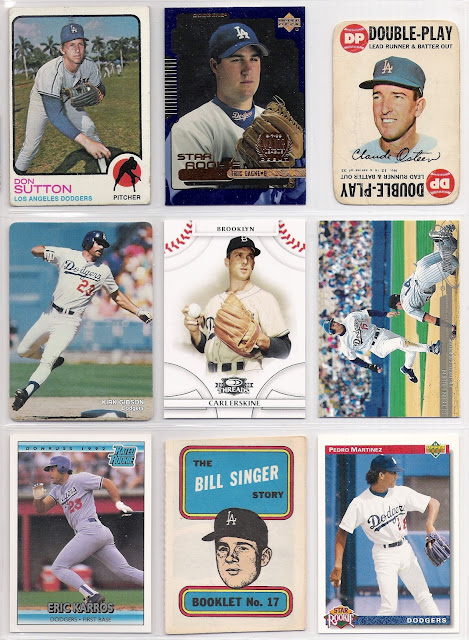 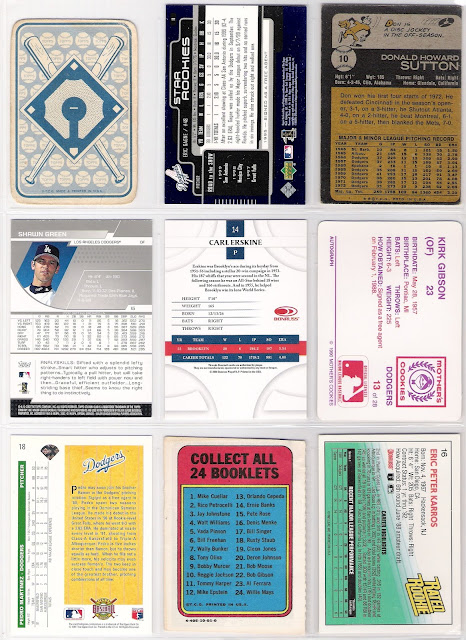 for this sheet, there really isn't a card here that i knew had to be in the set, but i did want to get don sutton in as soon as possible.  as the only hall of famer from the team of my youth, he deserved a spot early on.

i wasn't sure i was going to use inserts in this set, but here we have two of them on the second sheet!  i have quite a few copies of the osteen card (including one in my double play binder), but not as many as i have of the tommy davis card from that insert set.  davis is hatless on the set, and so his team affiliation is unclear and i suppose many folks think of him as a dodger and send the card my way.  however, davis was included in the flagship set that year as a member of the white sox, so let's send those cards to 2x3 heroes instead.

the other insert implied by the title is the bill singer booklet in all of its diamond cut glory.

there are a lot of pitchers on this sheet (with erskine bringing the first unlicensed card to the set), along with a rookie of the year, and a guy who was at one time my favorite dodger.

with the players and sets featured on the first sheet off the board, there were less cards to choose from - and there are a bunch of piazza cards that would have fit on this sheet.  a few cards that did receive some consideration here included osteen's 1971 topps and/or o-pee-chee card at number 10 (but he lost out to sutton), arky vaughn's 1960 fleer card at number 11, the 1967 topps jim campanis/bill singer rookie at number 12, jody reed's 1994 topps stadium club card and willie keeler's 2012 panini cooperstown card at number 13, a sweet 1982 cracker jack duke snider oddball card at number 15, and a 1960 leaf jim gilliam card at number 18.  all gave way to what you see above for one reason or another.  in fact, the reed card was in the set up until last month when i juggled a couple cards around to make room for a new card number 24.  i'll tell that story in the next post.

had it not been bumped for the gibson, the aforementioned jody reed card may have taken the prize for this sheet.  after all, it's a double play turn in dodger stadium. what's not to like?  however, given the nine cards that made the sheet, i'll go with the card that replaced reed.  a kirk gibson action shot during a day game in dodger stadium.  it's nice.

i think there are a total of three parallel cards later on in the set, but the osteen and singer cards are the only true inserts in my frankenset.
Posted by gcrl at 9:55 AM