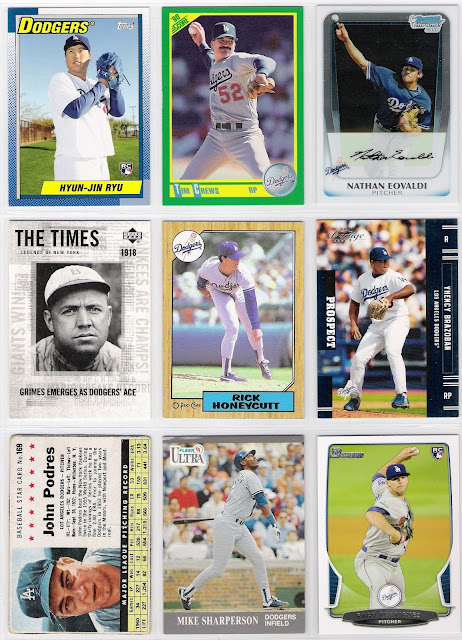 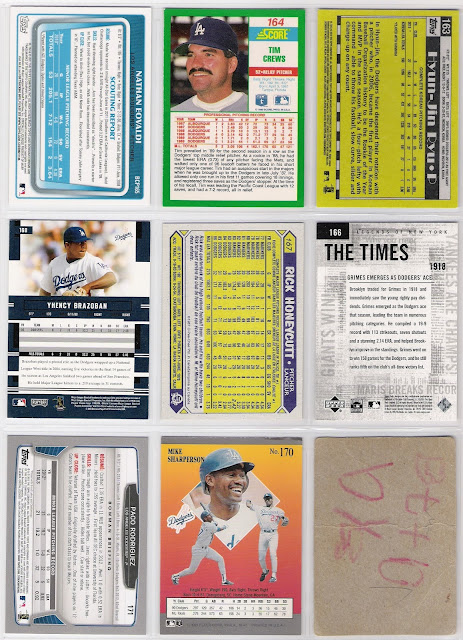 hungover johnny podres was the fist card on this sheet.  i don't have too many post doubles from the 1960's, so this card was a sure thing for the set.

there are two reasons to wear a belt.  one is to hold up your pants. the other is to break up all of the white in the dodger uniform. hyun-jin ryu may well be wearing a belt, but his archives card is a good example of the need for some relief from all that white - especially when the blue name script and red numbers are obscured.  tim crews is wearing his belt with his away grays on his 1990 score card.

nathan eovaldi was traded to the marlins in the hanley ramirez deal.  now he's pitching for the yankees.  i think the dodgers could use his arm these days.  back in the day, burleigh grimes pitched for, and later managed, the brooklyn ball club.  this 2001 legends of new york card notes that grimes was the dodgers' ace, although he pitched for the team when they were known as the robins.

seeing rick honeycutt's 1987 opc card right below the crews '90 score card makes me notice the similarities between the two designs. former closer yhency brazoban's 2005 playoff prestige card reminds me of jon weisman's dodger thoughts blog.  there were a few "ghame over" (or "guame over" if duaner sanchez closed) comments after dodger victories in jon's game posts that season.

johnny podres looks rough on his 1961 post card, and the card itself isn't in the best shape.  plus, look at the writing on the back! i have no idea what message was being conveyed in crayon there.  the back of mike sharperson's 1991 ultra card features three photos!  such innovation by fleer.  and, getting back to the title of the post, there are eight pitchers on this sheet, and mike sharperson.  despite sharperson's super-utility status, he never did pitch in a big league game.  the last pitcher on the page is paco rodriguez.  like i said about eovaldi, i think the dodgers could use paco in the bullpen right now.  too bad he's out for the season following tommy john surgery.

i don't have doubles of sandy koufax's 1959 topps card, so it was never in contention at number 163, but there were other cards considered for this page that fell short.  they include jim brewer's 1975 topps card at number 163, zack wheat's 1991 conlon collection card 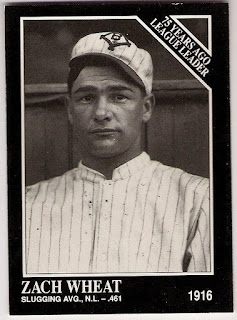 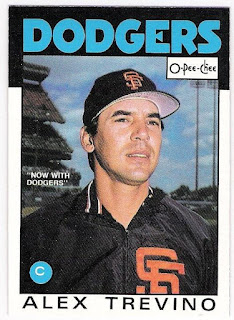 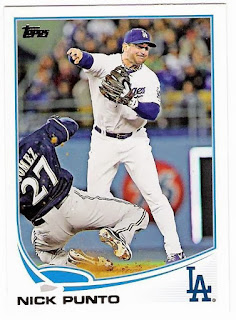 there's not a real standout on this sheet, but i certainly like the idea of burleigh grimes cards in modern day sets.  i'll choose it as my favorite, even if the team name is wrong and even though there is an almost identical card just a couple of slots away in that legends of new york set.

it was a coincidence to feature both crews and sharperson on this sheet.  both guys died in accidents during their playing days - crews on a boat during spring training (in an accident that claimed the life of indians' teammate steve olin and injured bobby ojeda) and sharperson in a car accident on his way to join the padres from triple-a las vegas.
Posted by gcrl at 9:55 AM