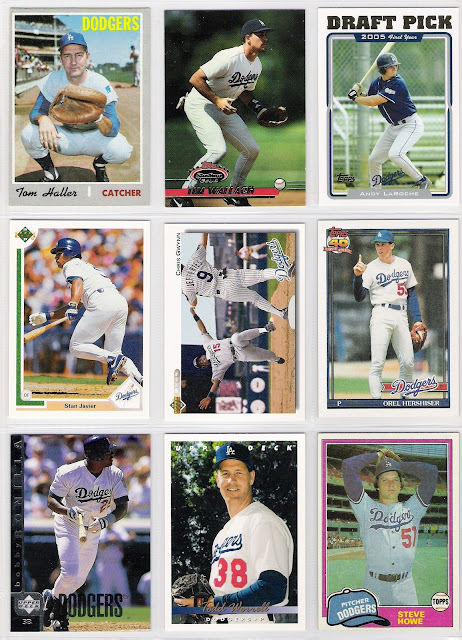 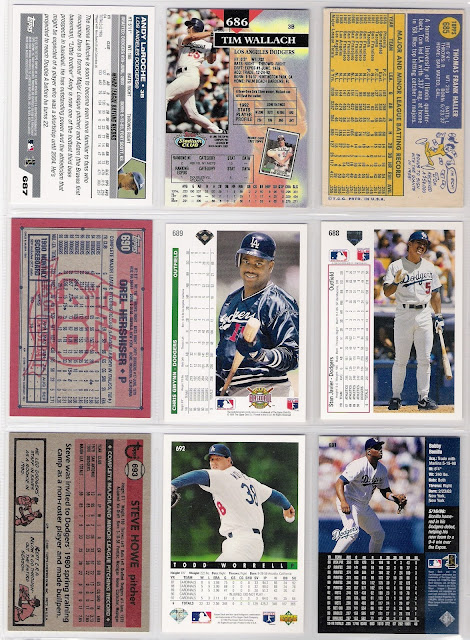 that would be the 1992 upper deck chris gwynn card, with the rare double play turn attempt at third base.

the best thing about the 1970 topps tom haller card is not fact that it actually features haller in a dodger uniform, nor that he has a look on his face that balances tolerance and annoyance for and with the photographer.  it's what is happening in the background with the two players over his left shoulder. 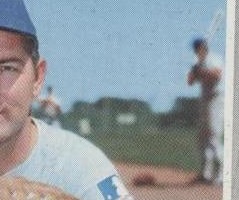 are they playing pepper? perhaps, but the fact that the guy with the bat is using his glove as home plate, just like we did as kids, is awesome.

i chose the 1993 topps stadium club tim wallach card for this spot over a steve garvey card from 1972 due to the fact that i didn't have a spare of the garvey card.  it's his high numbered second year card that is the most expensive to obtain.  garvey has had a good run in this frankenset, but i'm still a little bummed that he's not in this spot, too.

andy laroche's 2005 topps card is the next one up. laroche was a 39th round draft pick of the dodgers in 2003, so i suppose it's not a surprise that he had a short career.  i had hoped that he would bring stability to the hot corner for the dodgers, but he was traded to pittsburgh as part of the three-team manny ramirez/jason bay deal in 2008.

now we have stan javier's 1991 upper deck card right next to chris gwynn's 1992 upper deck card so we can see the design evolution. there's not much of a connection there, as upper deck finished their run around the bases in 1991 and went to something different in '92.  i was drawn in by the floating team logo within the picture on the 1992 cards, perhaps because i liked the 1991 topps set that had done something similar with the logo (although with a ribbon behind it) as evidenced by the 1991 topps orel hershiser card that finishes off this row.

i almost made it through the frankenset without a bobby bonilla card, but relented and put this 1998 upper deck card in at number 691.  bobby bo played for the dodgers in the last half of the 1998 season following the mike piazza trade, and i was pleased when they did not retain him for the 1999 season.

todd worrell's 1993 upper deck card features more foliage than we are used to seeing on a baseball card - both on front and back, but steve howe's 1981 topps card puts things back in a stadium where they belong.  i really liked the '81 topps design with the hats, and i have to believe that it influenced don and russ to go with the ball and glove designs for their product in the two years that followed. 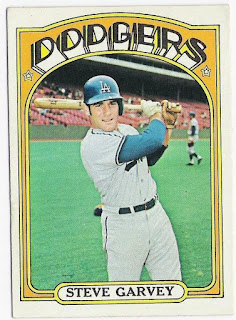 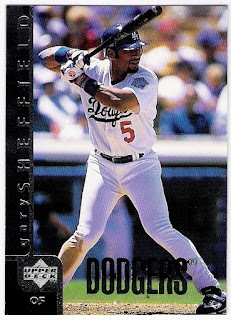 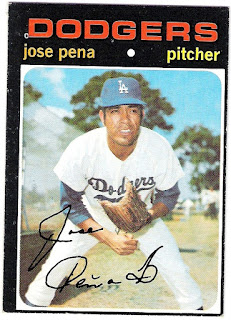 given the absence of the 1972 topps garvey on the page, it's a bit of a toss up.  still, i really do like the gwynn card, so it take the honors for today.

it's a topic that has been thrown around the blogosphere for a long time - what is vintage? to me, vintage was always 1970 and prior, although i now see 1971 and 1972 as vintage, too.  the 1970 thing is based on when i was born. the 1970 topps set came out before i entered this world, so it's vintage. i am not. yet.  in 1984 i really began to take an interest in the 1971 set beyond the dodgers (i had a few cards, including a reggie jackson that i bought at the very first card show i attended), and an appreciation for the 1972 set followed soon thereafter. i was never really excited by the 1973 set until just a few years ago, so that's why i cut the vintage tag off with 1972.  at any rate, there was an opportunity to have the three 1970's vintage (to me) sets represented on this sheet, and only tom haller's 1970 topps card made it.  however, if a certain lawyer in new mexico wants to send me a fifth 1972 topps steve garvey card (i currently have one in the garvey collection, one in the dodger team collection, one signed in the garvey collection, and one in the 1972 topps set binder) for that 1993 stadium club tim wallach card, then the '72 garv would be the last vintage card in this set.
Posted by gcrl at 9:55 AM