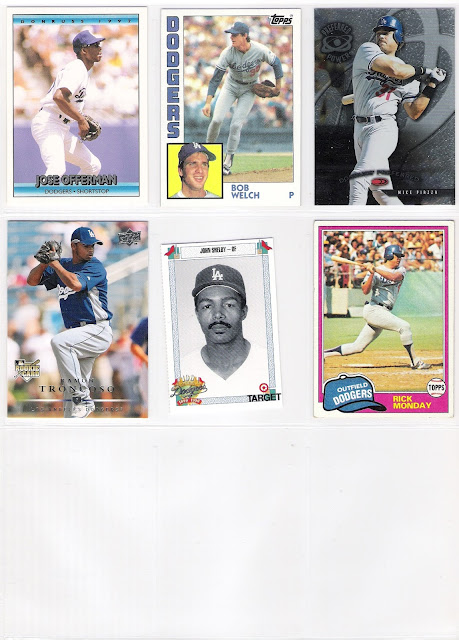 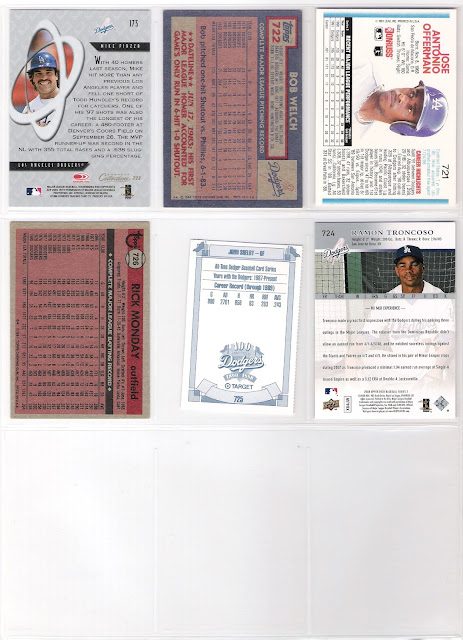 i believe that the shelby card may be the only number 725 card ever produced to feature a dodger.  so, it is the no brainer of the day by default.

the much maligned 1992 donruss set opens up the final sheet with a card of much maligned jose offerman.  1992 was the year that offerman took over the shortstop position for the dodgers full-time. he held the position through the 1995 season, after which the dodgers and royals did the steve sax/willie randolph thing with offerman and greg gagne and "swapped" shortstops even though offerman was traded to the royals for a reliever and gagne left kc through free agency.

bob welch's 1984 topps card is up next.  the back of the card - in both the text below the stats and in the important sounding "dateline" section - mentions a couple of shutouts thrown by welch in 1983.  in addition to the one-hitter against the phillies and the 6-hitter in which welch homered for the only run, he also threw a 2-hit shutout that season against the mets, beating tom seaver in the process.

mike piazza makes an appearance on the final sheet with a card from the 1998 donruss collections preferred set. the card is number 173 in the regular preferred set, but in this shinier collections set, it's number 723 (the card number is in the lower right on the back).  strangely enough, the only other option for this spot besides the 1990 target set is piazza's 1992 fleer procards minor league card showing him as an albuquerque duke.

upper deck's last contribution to my dodger frankenset is ramon troncoso's 2008 ud flagship card.  it leaves me wondering if anyone ever entered those codes on the back of these cards into upper deck's website.  i did for some back in 2006, i think, but never enough to have it amount to anything. i don't even remember what the purpose was.

it figures that another 1990 target card would make the last sheet, and here is john shelby to fill a spot that otherwise would not be filled.  t-bone had a career year for the dodgers in 1987 following his trade from baltimore, and he won his second world series ring (he won with the orioles in 1983) as the dodger centerfielder in 1988.

that brings us to card number 726, the last card in the set, and it's rick monday's 1981 topps card.  wilbur wood was card number 726 in 1978 topps, the first set that i collected, but i later discovered that topps sets were not always 726 cards, and in fact the 1978 set was the first time they had been that exact size.  topps maintained the 726 set for three more seasons - the giants' prospect card held that place in 1979, and in 1980 and 1981, it was a dodger at the end of the set, with the centerfielder of my youth holding court in 1981. of course, this was also the year that the traded set was reinstated, and the numbering of that set began at 727, so one could argue that monday's card is not really the last in the set.

there weren't a lot of cards to choose from for this sheet, and so the biggest dilemma i faced was whether to go with the monday card at 726 or use steve yeager's 1980 topps card 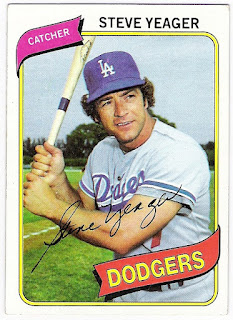 there instead.  mo won out, thanks in part to his card featuring an action shot and being from their world championship season.  as for filling out the sheet, henry rodriguez's 1994 topps card 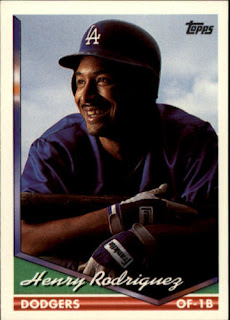 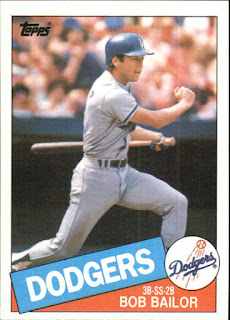 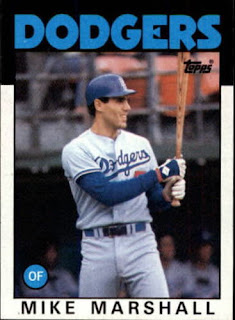 to be specific) had i chosen to extend the set.  however, the only 729 i could find (other than the target set) was a 1992 minor league card of eddie pye as an albuquerque duke from that same set as the piazza i mentioned above.  it's just as well to keep the set to 726 cards in my opinion.

that would be the rick monday card. it is fairly representative of the 1981 postseason to me.

it wasn't too long after i ended my run at garveyceyrusselllopes about 13 months ago that i started working on this frankenset. it kept me busy with my collection, as did the trades that continued to happen even though i didn't have an active blog at the time.

speaking of trades, i offer a big thanks to those that continued to trade with me, and to those who are trading with me still.  i haven't posted any of the cards that i've received in trades over the last 13 months, so i'll give thanks here to the writer's journey, play at the plate, penny sleeve for your thoughts, arpsmith, tim wallach, tribe cards, dime boxes, 2x3 heroes, bob walk the plank, all trade bait all the time, off hiatus, brad's blog, infield fly rule, waiting 'til next year, baseball card breakdown, baseball every night, waxaholic, fuji, and night owl, who has even commented on all of these posts (assuming he comments on this one).  i've been tracking my trades on the sidebar over at garveyceyrusselllopes, updating it whenever i send or receive a package. it's mainly so i don't miss on sending a return package to someone, and completed trades get removed from the list after about a month. as a result, i may have forgotten to thank someone in the text above - if so, i apologize.  i hope to keep trading even after this blog is completed, and i'll keep that tracker going as long as folks are sending me cards. it is appreciated.

finally, thanks for indulging me with this endeavor.  it was fun to put together and share with you.