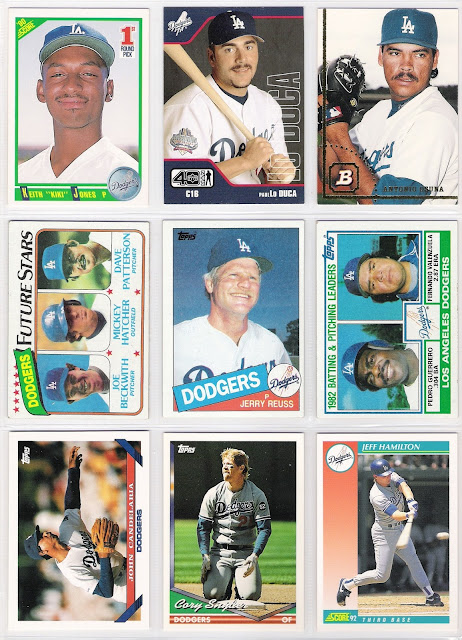 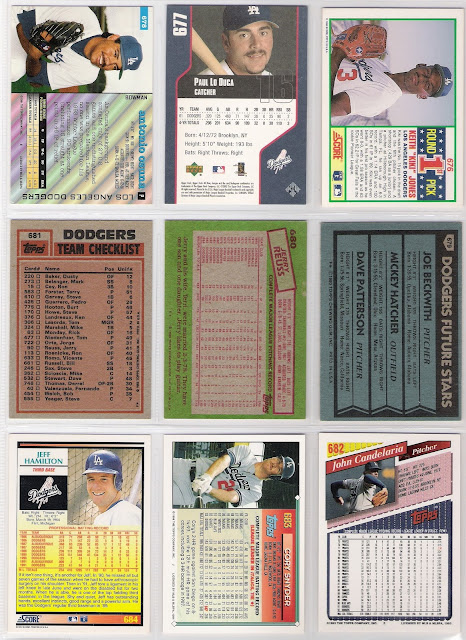 i suppose the 1980 topps dodgers future stars card is the closest thing to a no brainer here, but not sure that it qualifies. i'll make as good a case as i can below.

keith "kiki" jones was 8-0 in the rookie league in 1989, prompting score to add him to their 1990 set.  he never did make it to the big leagues despite a good arm and curveball, according to scouts - another dodger first round pick that didn't pan out.

paul loduca may or may not have had some illegal help in getting to the big leagues (he was named in the mitchell report), but he made it, and found himself in the 2002 upper deck 40 man set.  this was the evolution of upper deck's victory set, which was similar to topps total.  as a team collector, i appreciate sets like these, although the 2003 40 man set is better, in my opinion.

1994 bowman is here with antonio osuna and so much foil!  everytime i see a card of antonio osuna, i find myself looking for that monstrous pendant he wore around his neck the first time i saw him pitch.

the first rookie cards i saw were the 4-in-1 cards in the 1978 topps set. those cards, in keeping tradition with what was produced from 1974 through '78, had multiple teams represented on each card (in 1973, the rookie cards had three players from different teams on them).  in 1979, topps gave me a card with just dodgers on it, but it was in black and white.  then, in 1980, they gave me this trio of dodgers in full color!  shades of 1972, i would eventually learn.  anyway, i knew who all three of these guys (joe beckwith, mickey hatcher, and dave patterson) were because they had played for the dodgers in 1979 - in fact, i still remember listening to the game in which hatcher made his major league debut because he came up with the bases loaded and vin scully noted that he had a chance to do something very rare in his first big league at bat.  well, hatcher didn't hit a grand slam, but he did walk.  i was pretty happy to have this card in 1980, even though patterson never made it back to the majors.

jerry reuss makes another appearance in the set with his 1985 topps card. he looks pretty happy to be in vero beach, and i can't really blame him given the circumstances.   he wound up sporting a 2.92 era in 1985, which didn't even crack the top ten in the national league.  he also lost 10 games with an era split of 1.21 in his wins, and 7.03 in his losses.  his era in the 1985 postseason was 10.80 - can you guess what the game outcome was?

pedro guerrero and fernando valenzuela were the dodgers' batting and pitching leaders in 1982, respectively.  i know this thanks to this 1983 topps card that marks the return of the dodger logo to topps cards for the first time since what, 1963? 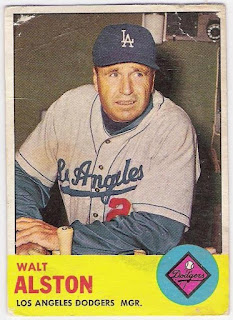 in hindsight, i am left wondering why the logo is in a box rather than a circle, since all of the other 1983 topps cards have circles (portholes, if you will). 1984 is the one with squares (picture in picture, i call it).

john candelaria's 1993 topps card is right next to cory snyder's 1994 topps card, so you can try to find some back-to-back design evolutionary ties.  i can't find any, really, but i was happy that topps went back to the landscape oriented backs in '94.  snyder's card, with him camped out on second base, reminds me of my final little league (minors) game.  i was 9 and on third base. two of my friends were on second and first, respectively, and a kid that we only knew through baseball was at the plate.  two outs, full count, down by a run with the league championship on the line - all of the cliches you can think of. the kid at bat swung at ball 4 and the game was over. my friend sat on second base and looked pretty much the same way snyder does on his card.

last card on the sheet is jeff hamilton's 1992 score card.  that's pretty much all i have to say about that.  oh, all right - i'll mention that hamilton was the losing pitcher in the 22-inning game between the astros and dodgers in 1989. he struck out ken caminiti (and billy hatcher), but was beat by a rafael ramirez walk-off single. this was the same game that ended with eddie murray playing third base and fernando valenzuela at first. 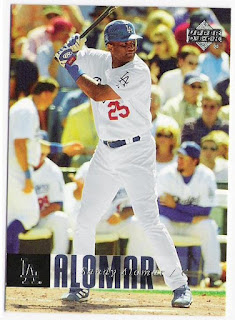 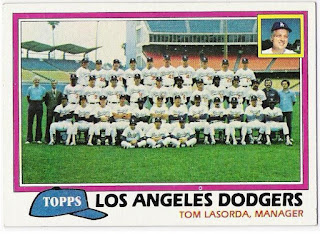 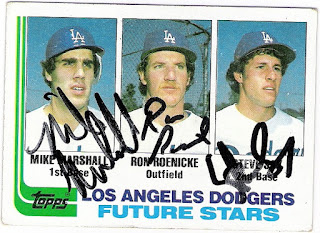 as much as i appreciate seeing disappointed cory snyder on second base, i like the 1980 topps future stars card more.

the dodgers currently have a player on their roster named enrique hernandez.  his nickname, like that of keith jones, is pronounced by many as "key-key".  however, enrique spells it with an "e" on the end, rather than the second "i", and it is actually pronounced "key-kay".  it's all about the accent over the "e".  anyway, the first time i saw enrique's nickname in print (without the accent), i was a bit surprised, as it is commonly known to be a slur for jewish people.  i am pretty sure this is why topps cards show his name as enrique, 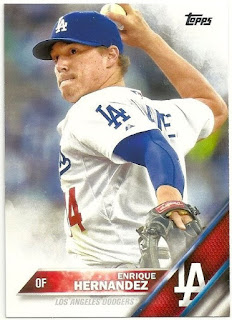 and not his nickname.
Posted by gcrl at 9:55 AM