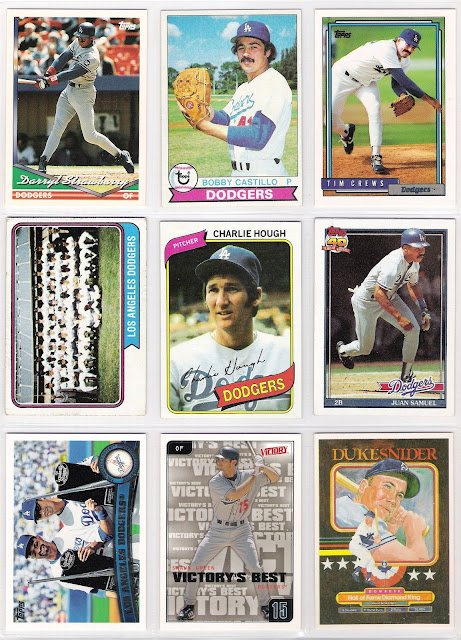 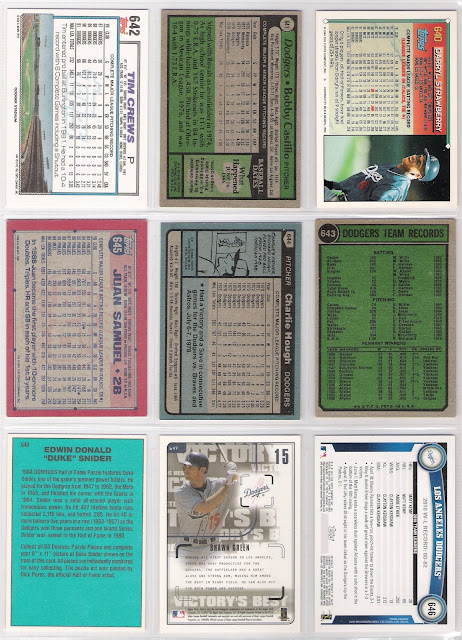 the 1984 donruss duke snider card was a no brainer for me. that was the first card of a retired dodger that i pulled from a mainstream pack. i was pretty excited as a dodger fan that the silver fox was the puzzle in 1984, and it certainly contributed to me buying more packs of donruss that year.

it's hard for me to recall darryl strawberry having dodger cards as late as 1994, since it seems like he played for them for such a short time. of course, strawberry didn't play for the dodgers in 1994, and this '94 topps card is one of the last to feature him in dodger blue. 1994 was the year that darryl went awol at the end of spring training and shortly thereafter enrolled at the betty ford center. the dodgers released him early in the season, and he wound up signing with the giants.  blech.  you will note that the 1994 topps card features a photo of strawberry from the 1993 season (a season in which he hit just .140 in 32 games). we know it is from 1993 because the tim crews memorial patch is visible.

the 1979 topps bobby castillo card was one that i was looking forward to - not as much as the 1979 topps bob welch card, but there was still some anticipation on my part. during the 1978 season, i would listen to dodger games while sitting at the dining room table with my dad as he caught up on paperwork. the little transistor radio would sit between us, and vin scully, jerry doggett, and ross porter would spin their tales while the dodgers advanced to a second consecutive national league pennant. i would sometimes look at my 1978 topps cards while listening, and when castillo came into the game, i had no card to look at.  with bill north and joe ferguson, i had cards but they showed those guys as an athletic and an astro.  still, i had cards. for castillo (and welch and rudy law), i had nothing. as you will see below, my feelings about this card are strong enough for it to bump a 1978 topps card out of the frankenset!

i mentioned the tim crews memorial patch showing on the strawberry card, and now here is the man himself on a 1992 topps card.  crews left the dodgers after the 1992 season and joined the indians. it was during spring training in 1993 that he died (along with teammate steve olin) in a boating accident, prompting the dodgers and indians to wear memorial patches.

the 1974 topps dodger team card features, as do most dodger team cards from 1971 on (1972 being the only exception i can think of), a photo of the team in dodger stadium. they chose a more nondescript part of the stadium as the background (that's the first base side of the stadium behind them) rather than the pavilions.  for what it's worth, steve garvey is in the second row between lee lacy and joe ferguson.

charlie hough is on that team card, too. he's in the back row next to don sutton, and here he is as well on his 1980 topps card. this was the last topps card to feature hough as a dodger as he had his contract purchased by the rangers in july of 1980.  i was disappointed as the team of my youth was starting to disassemble - first rick rhoden before the 1980 season, and then hough during it.  after the season, don sutton would move on, too, and it's a good thing the dodgers won it all in 1981 otherwise i would have really lost it when davey lopes was traded away following that postseason.

with lopes gone, steve sax took over and was even my favorite dodger after steve garvey left for san diego prior to the 1983 season.  after sax left for the yankees following the 1988 postseason, the dodgers struggled (and still struggle) to find a long-term solution at second base. one guy they brought in for a while was juan samuel, seen here on his 1991 topps card.  sammy came over from the mets in a deal that cost the dodgers mike marshall and alejandro pena, which was not necessarily a lot depending upon how you felt about pena.  even though he was not the dynamic player he had been with the phillies early in his career, samuel was pretty reliable in his two full seasons with the dodgers, and he was part of the dodger contingent at the 1991 all-star game.

in 2009, both matt kemp and andre ethier were named recipients of the silver slugger award, and the photo of them receiving the awards at the start of the 2010 season made its way to this 2011 topps card.  the dodgers have had more pitchers win the silver slugger than any other position (if you separate out the outfielders) with fernando valenzuela, tim leary, orel hershiser, and zack greinke each taking home the hardware as dodgers. by my count, the other dodgers to win the silver slugger are dusty baker, pedro guerrero, steve sax, kirk gibson, eddie murray, mike piazza, eric karros, adrian beltre, jeff kent, russell martin, and adrian gonzalez.

not on that list is shawn green, who appears here on a 2001 upper deck victory card. during green's best offensive years, he lost out to barry bonds, sammy sosa, luis gonzalez (in his anomaly of a year in 2001), and vladimir guerrero.

last card on this sheet is the 1984 donruss duke snider card. in 1982, following a ruling favoring topps, donruss switched from gum to puzzle pieces as the accompaniment to their cards in packs.  that first year, the puzzle was of babe ruth, and in 1983, it was mickey mantle. donruss chose snider for the puzzle in 1984, and they included a card showing the complete puzzle image in the card set for the first time.  just another reason that 1984 donruss is my favorite donruss set. 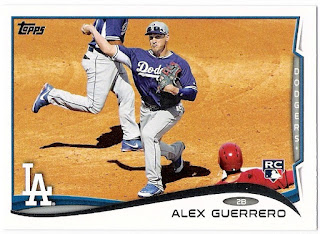 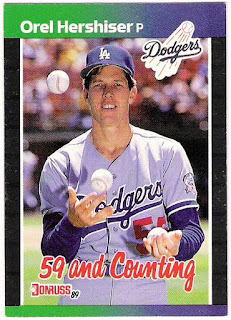 as much as i like seeing dodgers get awards on cards, the duke snider card is my favorite here.

as far as i have been able to gather, since moving to los angeles, the dodgers have worn some sort of memorial independently from the rest of the league 8 times.  this includes a combined memorial patch for roy campanella and don drysdale who passed away within a few days of each other in 1993, but not a patch worn for a front office employee during a tour of japan.  this list includes a presidential candidate (bobby kennedy in 1968), the wife of an active player (ken mcmullen in 1974), two active coaches (jim gilliam in 1978 and don mcmahon in 1987), and an active former player in tim crews.  the rest have been players for whom the dodgers have retired a number - campanella and drysdale, pee wee reese in 1999, and duke snider in 2011.  the dodgers did not wear a memorial following the death of jackie robinson - most likely because he passed away in october of 1972, and not during or close to the start of a baseball season.  earlier that year, the mets wore an armband for gil hodges, but not the dodgers.

as many of you know, i have a mini collection of cards featuring memorial patches and armbands, and so i think about this stuff.  i wonder for whom the dodgers will wear patches for in the future.  given what seems to be their current criteria, sandy koufax, don sutton, and tom lasorda would be on the list, as would vin scully given his hall of fame status.  walter o'malley didn't receive a patch as many other owners have in recent years, so i'm not sure whether peter o'malley would at this point.  i was a bit confused about the dodgers not wearing some sort of memorial for willie davis after he died, as he is still high on many los angeles dodger statistical leader boards, so what about don newcombe, manny mota, and maury wills? they've been a part of the dodger family for decades but are not in the hall of fame.  similarly, will the padres (who have retired his number) and not the dodgers wear something when steve garvey passes?  it's kind of a downer subject, but the connection to the past is a bigger part of the game for me the older i get.
Posted by gcrl at 9:55 AM