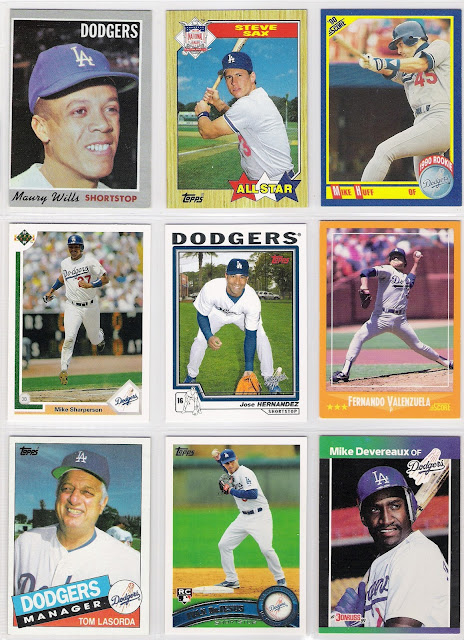 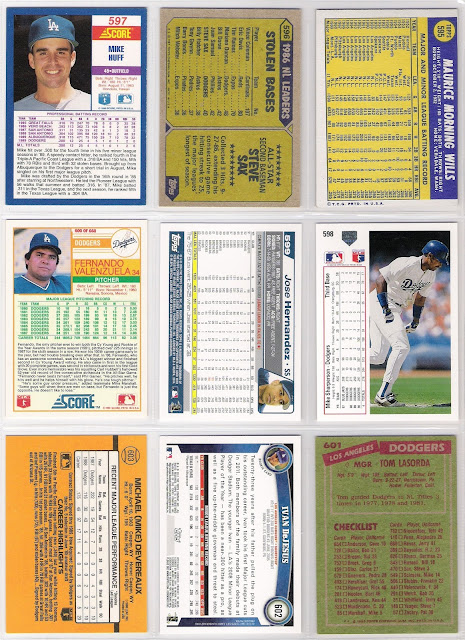 the first card issued by topps to officially feature maurice morning wills as a dodger was a sure thing for the set.

but he was not named. sy berger didn't regard wills as a prospect one spring and so will refused to sign with topps even as he won the 1962 mvp award. he was a big proponent of fleer and convinced a couple of his teammates to sign on for the 1963 set.  topps eventually was able to sign wills, and featured him by name for the first time in the 1967 set. he was a pirate by then, and had the dodgers not reacquired wills in 1969, we would not have had a dodger card issued by topps during his playing days.  topps did go back and create a 1962 card to feature in the 1975 mvp subset and 1982 kmart mvp set, but i did one better and created cards that should have been all the way back to 1959.

steve sax took over second base from davey lopes in 1982, and he made his first all-star team (as a reserve) that same year.  he was an all-star again in 1983, but this time was voted in by the fans to start at second base for the national league. topps didn't care, and featured johnny ray as the nl all-star at second base in 1984.  that's why i liked this 1987 topps card so much when it was released even though sax was a reserve in 1986 behind starter ryne sandberg. i didn't care that cubs fans were upset with topps  as long as i got my extra saxy card.

mike huff's 1990 score card was also appreciated by those of us team collectors who are completists. huff was shunned by donruss and topps (aside from an appearance in the 1990 topps debut '89 set) during his dodger tenure, receiving cards only from fleer, classic, and score.  huff (like homonym-ically named charlie hough) is also one of the relatively many hawaiian native players that played for the dodgers. others i can name off the top of my head are sid fernandez, carlos diaz, shane victorino, and onan masaoka.

hoo boy, do i like mike sharperson's 1991 upper deck card.  i wrote a post about how much i like it six years ago.  a day game in dodger stadium makes for great photos. 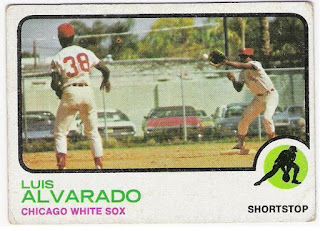 that is at once a spectacle and a conundrum.  hernandez's card doesn't compare, but one does see the progression from muscle cars on the alvarado card to a yellow bug on dave goltz's 1981 topps card 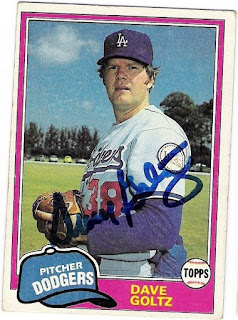 to an suv on the hernandez card.

here we are at another hero number, and this time it's fernando valenzuela filling the spot with his 1988 score card.  that's good numbering by score, even though el toro was on the downside of his dodger career.  fernando somehow had an era under 4 (3.98) in 1987 despite leading the league in walks and hits allowed - he had a whip of 1.51!

next up is tom lasorda's 1985 topps card.  i think i would have liked 1985 topps better if all the cards had that position bar under the team name rather than having the position crammed in between the name text and logo.  i don't understand why topps did this because they could have shoehorned "mgr" in there like they fit some dual positions on other cards.

ivan dejesus jr got some love from topps in 2011 which was the year that he made his big league debut. the following season, the dodgers traded dejesus (just like they did with his dad).  these days, he's in cincinnati which was news to me.  i couldn't name more than two reds players, and one of those guys is now a met.

last card on the sheet belongs to dodger double dipper mike devereaux courtesy of 1989 donruss.  devereaux is probably best remembered as the 1995 nlcs mvp for the braves who beat the reds who had beat the dodgers in the nlds. 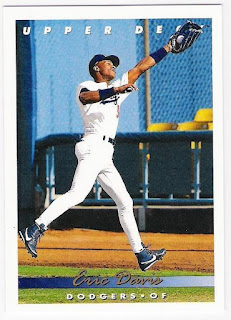 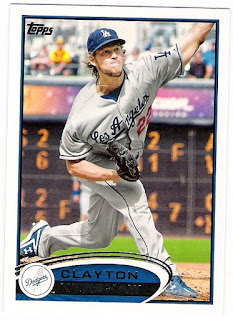 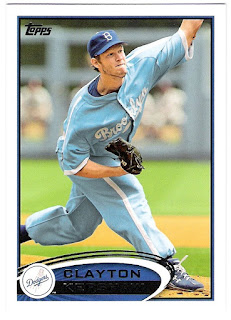 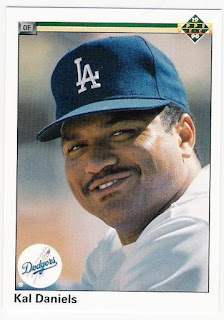 i really like what the maury wills card represents, but mike sharperson's 1991 upper deck card is one of my favorite cards, period.

there was a focus put on throwback uniforms by mlb this year - just a few weekends ago - and the dodgers participated by wearing brooklyn hats on the field.  i think there was a huge missed opportunity here given that 2016 is the 100th anniversary of the franchise's first world series appearance and that the club wore these uniforms that season 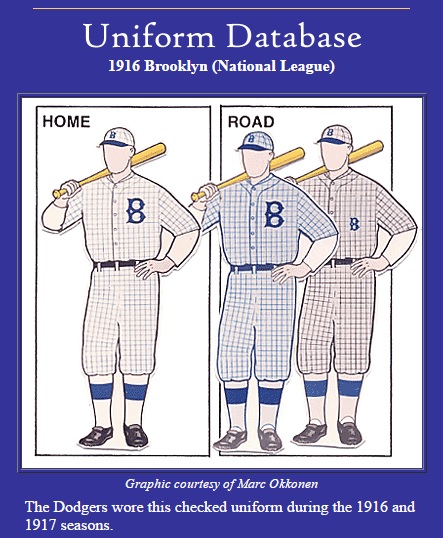 that would have been at least as interesting as those baby blues on the variant kershaw shown above.
Posted by gcrl at 9:55 AM