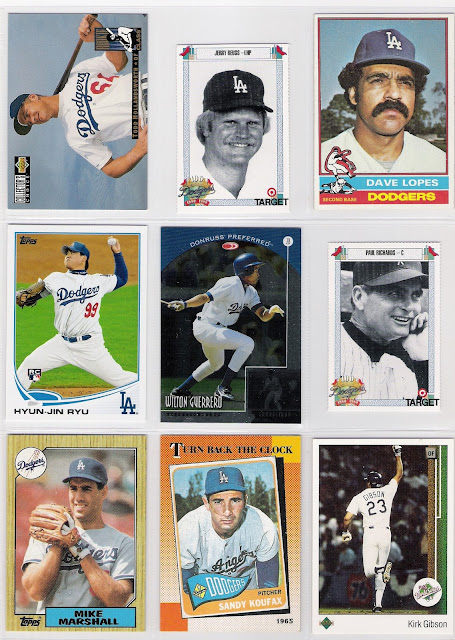 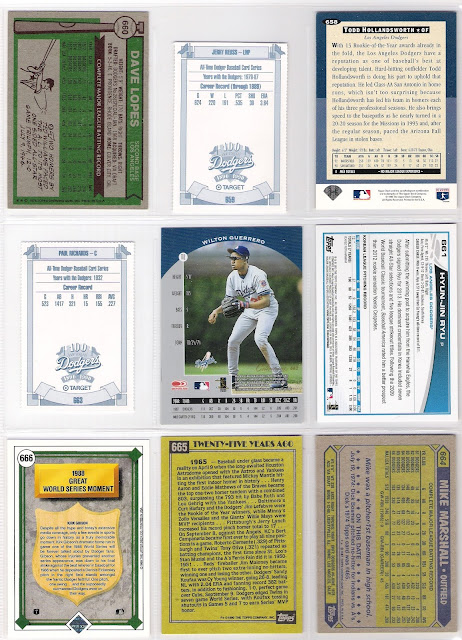 i knew that number 666 was going to be an upper deck card, and of the seven i had to choose from, the gibby was a no brainer.

upper deck was already over raul mondesi when they launched their collector's choice brand in 1994. while mondesi would go on to win the rookie of the year award that season, he had just a regular card in the set, and todd hollandsworth got this rookie class subset card instead.  holly would win the rookie of the year award two years later, but by then upper deck was all about karim garcia and wilton guerrero as far as dodger rookies were concerned.

it's time for another card from the 1990 target set to fill a hole. this time, it's friend of the blogging community jerry reuss.  i remember reading about reuss playing in a men's amateur baseball league following his retirement, but he was not allowed to pitch.  i played in a men's league for a few years and faced a few former minor league pitchers, and i can definitely understand amateurs not wanting to face a former big leaguer - the minor leaguers were tough enough.  i should point out that there was a card that i could have put here, but it is not the best (it's a plain fleer checklist), and knowing that reuss's target card was number 659, i chose reuss even though it puts two cards from target on this sheet.

this next card is, i believe, the final card of one of the infielders in this set. it's davey lopes's 1976 topps card.  there are no italics on the back of the card, but if there were, the stolen base totals for 1975 and 1976 would be italicized to denote the fact that lopes led the league in both of those seasons.  he finished third a couple of times later on, but never regained the top spot.  for his career, lopes ranks 26th all-time in steals and it looks to be a while before anyone bumps him to 27th.

hyun-jin ryu brings one of his multitude of 2013 topps cards to the set at number 661. this is the base version - i think there are three or four different photos for this card. it's nonsense, but i believe i have them all. i didn't pay much, but they should be even cheaper now with ryu having been injured for so long. i no longer actively chase photo variations, but may wind up getting a couple of the '42' variations in 2016 topps series 2.

1998 donruss collections returns with a preferred wilton guerrero card.  once again, these are just retooled cards from regular donruss issues, with all releases put into one set.  you have to look closely for the actual card number - it's not the number in the top corner, it's down below.

where i had an option at 659, there was no other alternative at 663 than a target card.  this one doesn't even feature a guy in a dodger uniform, as paul richards is shown in what i believe to be a white sox uniform (richards was their manager in the early 1950's and then again in 1976).  in fact, richards appeared in only three games for the 1932 brooklyn dodgers going 0 for 8 at the plate. he played for three other teams in the majors, with the last being the tigers in 1946.

mike marshall's 1987 topps card reminds me that his offensive production took a big step backwards in 1986.  he had hit 28 homers, driven in 95 runs, and posted a .293 average in 1985 - not on par with his minor league numbers, but still headed in the right direction.  in 1986, however, his average dropped by 60 points, and he played in 30 fewer games.  he rebounded a bit in 1987, getting his average back up to .294, but he never did get his slugging percentage back up to where it had been in 1985.  he had a reputation for not playing hurt, but for me, all that was forgotten with the 1988 world series and marshall's 3-run homer in game 2 to turn a 2-0 lead into 5-0 in the third inning.

it was a nice thing when topps started using old cards for the turn back the clock subsets in the late 1980's, and in 1990 we were treated to sandy koufax's 1965 card. at the time, i figured it was probably the only way that i would have that card in my collection, but i am happy to say that i was wrong. 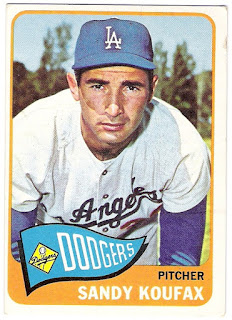 last card on the sheet is one of kirk gibson's 1989 upper deck cards. this one features him on his way to first base after hitting his walk-off home run in game 1 of the 1988 world series.  young gcrl is out there in the right field pavilion losing his mind and trying to take some pictures.  astute upper deck collectors noticed over the next few years that it was always a dodger at number 666 in the upper deck sets, and it was no coincidence as revealed in the 'card sharks' book. the guy who set the checklist for upper deck was a giants fan. 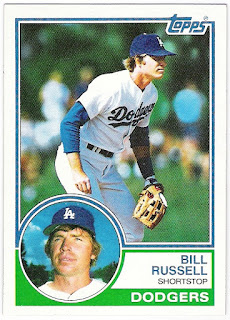 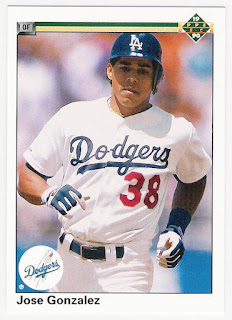 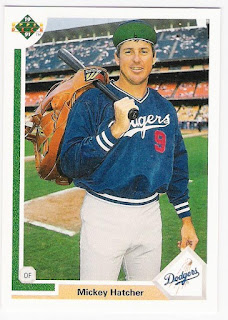 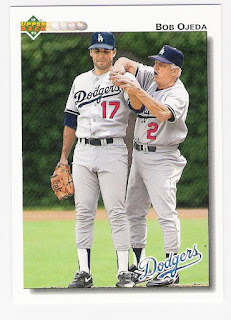 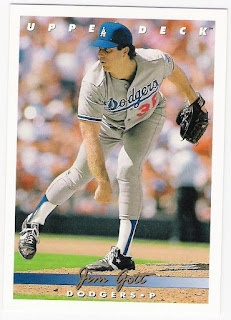 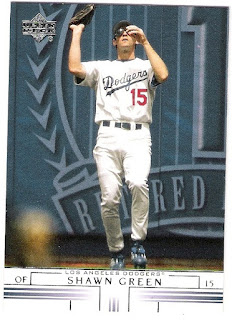 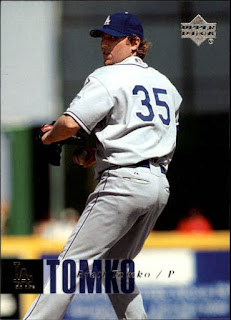 it's either the lopes or the gibson, and i have to go with world series heroics over the second baseman of the team of my youth.

two of these cards are the last cards in their respective set - the 1976 topps lopes and the 2013 topps hyun-jin ryu - which drives home the point that there are not very many sets left to choose cards from. i didn't realize in 1978 that it was the first year for the 726 card set size. had i really started collecting in 1977 (i was given my first pack of cards that year), this frankenset would have ended with davey lopes up there.  as it is, we get a few more pages.
Posted by gcrl at 9:55 AM