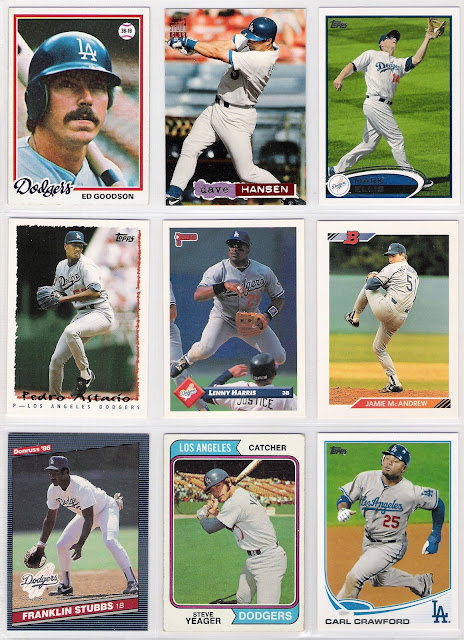 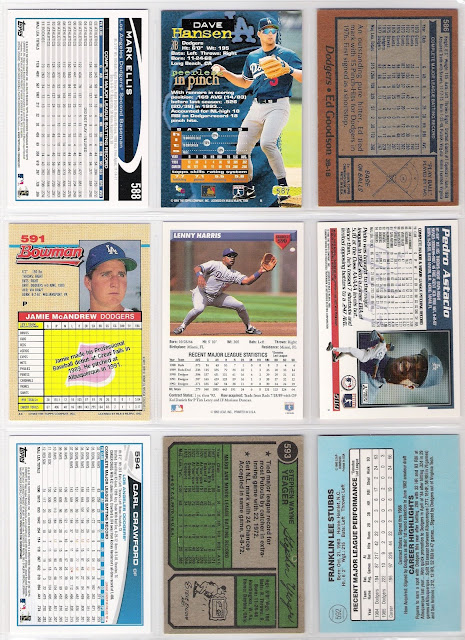 i wanted to get a card from 1992 bowman into the set, seeing as how it was such a big deal. i ignored it at the time, but did go back and complete my dodger team set a few years ago.  i recall buying a pack at a card store in orange county around 1996 - the only pack i ever bought - for a high price, hoping for a piazza rookie. i got a charles johnson gold foil card, which at the time wasn't too bad. still didn't pay for the pack.  anyway, jamie mcandrew's card was not a no brainer, but the set it represents was, so that will have to do for this sheet.

i suppose ed goodson's 1978 topps card could have been the no brainer.  i have a history with it, trying to find an autographed copy for my modest 1978 topps dodger autograph project. i am still pretty happy about finding one and buying it before anyone else jumped on it.

it must have been a hot day in vero beach when they took the photo for dave hansen's 1994 stadium club card - there aren't too many folks in the seats.

mark ellis' 2012 topps card features some bad photoshopping of his uniform. he's a rockie (or maybe still an athletic) in the original photo.

i bought a lot of 1995 topps. maybe it was because of the strike and i needed a baseball fix. it wasn't because of the design - i didn't get the frayed edges of the photos or the font used for player names.  anyway, this pedro astacio card is the first '95 topps card in the set which says a lot about how much i don't care for it.

lenny harris is turning two on his 1993 donruss card against the braves. that is obviously david justice sliding in. it could be a play from the 5th inning of the september 7, 1992 game between the clubs - harris was at second when sid bream hit a ball to short with justice on first. the 6-4-3 double play was successful.

jamie mcandrew did not pitch for the dodgers in the big leagues.  shortly after his 1992 bowman card was released, he was taken by the colorado rockies in the 1993 expansion draft. the rockies later traded him to the brewers, and he made it to the bigs with milwaukee in 1995.

there's not much to say about franklin stubbs' 1986 donruss card, or steve yeager's 1974 topps card for that matter. we've seen plenty of cards from these sets and of these players in the set already.  yeager's card, however, has a couple of things going for it - a cartoon (steve enjoys art), and a couple of interesting facts about his experience in a game played on august 8, 1972. the card says that yeager had an extra-inning record 22 putouts in that game, and that he also had a record 24 chances in the same game. it was a 19 inning affair against the reds, and dodger pitchers struck out 22 batters accounting for yeager's putouts, and he caught two runners stealing, giving him 2 assists and 24 chances.  this game was the sixth game of yeager's big league career, and he had caught complete games in the dodgers' previous five contests. yeager caught all 19 innings of this game, and started the next day, too, although he only made it to the 7th inning.

last card on the sheet is carl crawford's 2013 topps card, which, like the ellis earlier, features some obvious photoshopping. 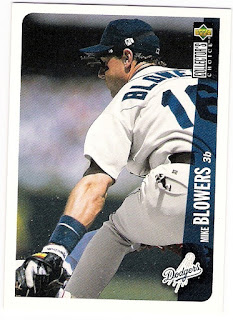 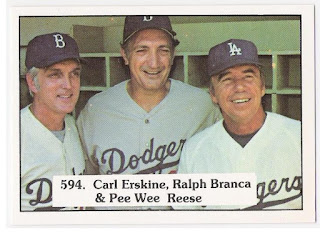 the goodson card has some meaning to me, but i like the hansen card the best out of this group.

sheet 66 makes me think of historic route 66 and yasiel puig (and, i suppose, mario lemieux).  i've driven parts of route 66 over the years, but never made the full run from chicago to santa monica.  i have gotten some kicks, mostly in 2013, from watching yasiel puig play, but i am more and more resigned to the fact that he won't recapture that dynamic anytime soon. with the hamstring injuries and trade rumors swirling, i don't know whether puig finishes out the season as a dodger, let alone on an active roster.  we may know more later today...
Posted by gcrl at 9:55 AM