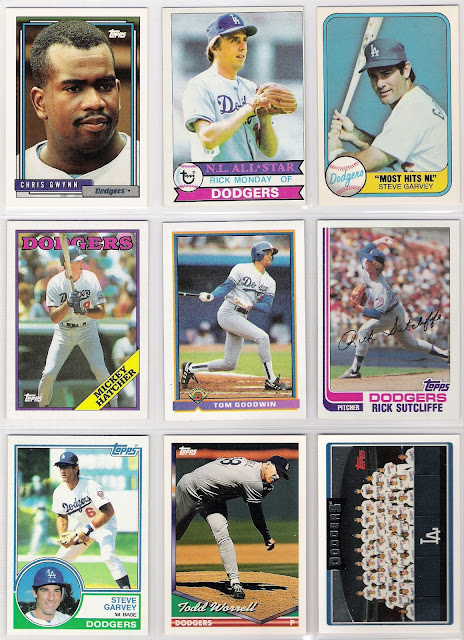 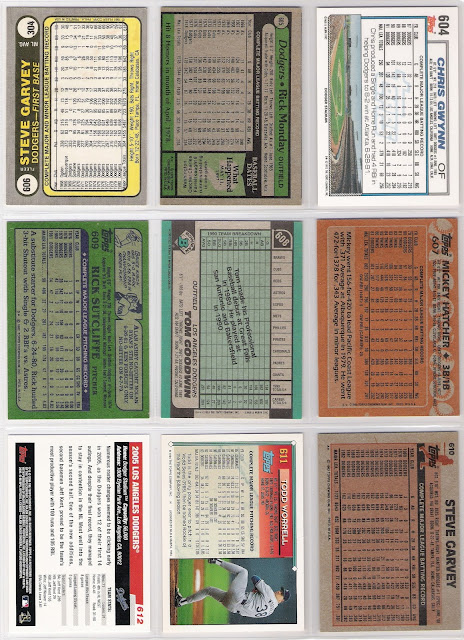 that would be steve garvey's last topps flagship card of him as a dodger.

chris gwynn could have been on this sheet twice instead of garvey, but i only gave him one spot. i chose sweaty chris gwynn and his 1992 topps card to start the sheet rather than use his 1989 upper deck card a couple of spots later.

rick monday was hitting .292 with 13 homers and 39 rbi heading into july of 1978 when he was voted in by the fans to start the all-star game for the national league. by the end of july, he was hitting .258 and still had 13 homers and 39 rbi. still, he was able to secure the all-star banner on his 1979 topps card thanks to his decent first half and the ballot-stuffing dodger fans.

it was pretty cool for a dodger and steve garvey fan to open packs of 1981 fleer and find out that the garv had two cards in the set.  this one was part of what would become the 'superstar special' subset in later fleer releases, and it recognizes garvey for having the most hits in the national league in 1980.  or, as fleer puts it, "most hits nl".  willie wilson also got an extra card in '81 fleer, as he led all players in hits with 230 (30 more than garvey) as well as in runs scored.

mickey hatcher was ok during the 1988 regular season, but his 1988 topps card here reminds me of his world series heroics that year.  after hitting .293 with one home run in the regular season, hatcher hit .368 with 2 home runs in 5 games against the a's.  had hershiser not been lights out in two games, i am sure that hatcher would have been the mvp of the series.

tom goodwin's 1991 bowman card features the future dodger double dipper wearing the always cool dual-ear flap helmet.  cards like this made me feel closer to the big leagues thanks to the helmets i wore while playing baseball. steve garvey even wore the dual-ear flaps a few times.

rick sutcliffe's 1982 topps card was his last as a dodger, as he had been traded to the indians in december of 1981. all he did after that was lead the american league in era in '82 and then win the cy young in '84 after being traded to the cubbies. speaking of last topps cards as a dodger, here's steve garvey's 1983 flagship card.  at least garvey got the o-pee-chee team and text variation treatment that year, while sutcliffe's 1982 opc card was too far along when the trade was made for the good canadian card makers to slap on the 'traded' text and different team affiliation.

todd worrell was still on his way back from injury when he signed with the dodgers for the 1993 season. he missed a fair chunk of the early '93 campaign which is reflected in the stats on the back of his 1994 topps card.  by 1995, worrell was back to his old self, and he set the dodger single season record for saves - a mark he broke the following year.

final card on the page is the 2006 topps dodger team card. these are your wild card winning dodgers who got swept out of the nlds by the mets, except the card uses the team photo from 2005 so jim tracy is still there instead of grady little, along with other missing players. 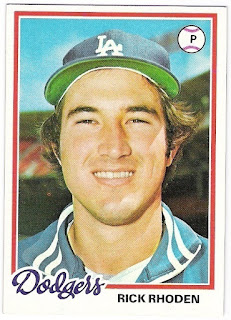 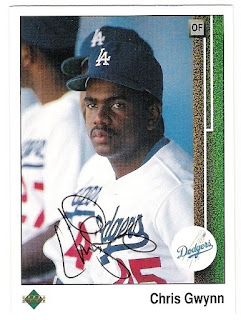 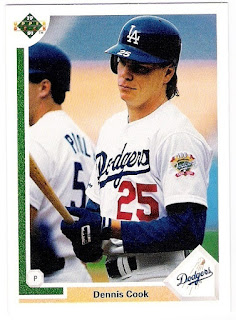 i like the 'bonus' 1981 fleer garvey card, and his 1983 topps card also has meaning, but my favorite here is the rick monday card due to the all-star banner.

that is a lot of pink/purple for the dodgers, even if the bowman design was the same for all teams. night owl did a study and noted this pink dodger phenomenon that thankfully ended with the 1988 set. let's hope it stays that way.
Posted by gcrl at 9:55 AM