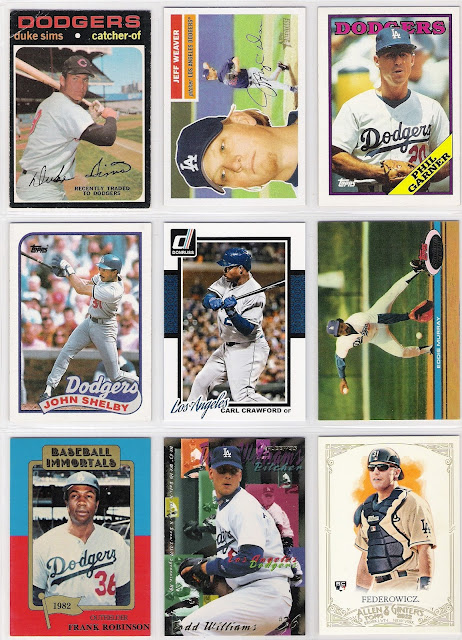 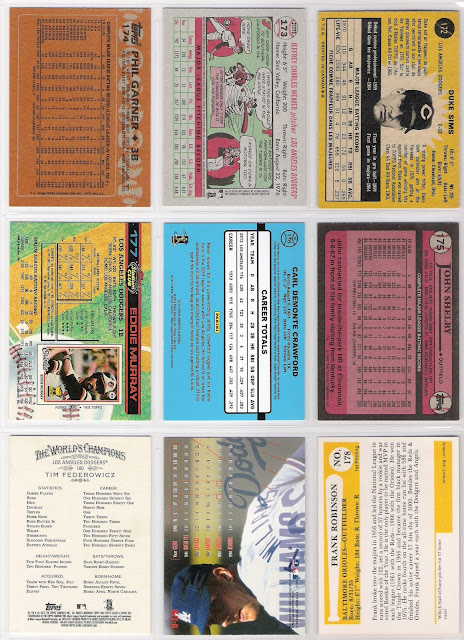 the frobby card was the no brainer here.  there just aren't too many cards of him in a dodger uniform, and at number 754, his 1972 topps high-number card falls outside of the numbering for this set.

i've written about the sims card before over at oh my o-pee-chee, and there's not much more to say about it other than i am a big fan.  i am only a so-so fan of topps heritage and jeff weaver. i had high hopes for weaver when he came to the dodgers from the american league where he had been somewhat successful, but my hopes were dashed over the next couple of years.  the best/weirdest thing about garner's 1988 topps card is that he doesn't have his mustache.  he could have given lanny mcdonald a run for his money.

with shelby's 1989 topps card, we have successive years of the flagship back-to-back on the sheet.  that's happened a few times before.  carl crawford's 2014 donruss card (i had to double check to make sure it was from 2014 as the design is so non-descript) is a fine example of the worst an unlicensed card can be.

eddie murray had to wait a long time to make the set, but i really wanted this stadium club card in the set.  it reminds me of lucy and ethel in the chocolate factory as he has his hands full with baseballs. i can picture joey amalfitano hitting fungoes to him rapid fire off camera.  the next card is the second hall of famer on the sheet, frank robinson.  his 1973 topps card 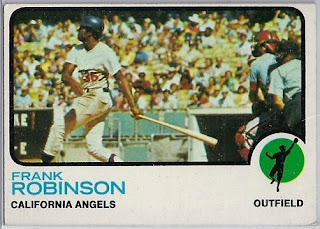 would have made the set (on this sheet at 175) if topps hadn't airbrushed out the 'dodgers' on his uniform and labeled frank as a california angel.  that card might be my favorite near-miss dodger card ever.

i bet you were wondering when the 1995 fleer abomination would show up. well, here it is (update, actually) with todd williams representing.  williams pitched in 16 games for the dodgers in '95 but was traded to the a's towards the end of the season and so wasn't around for the team's nlds sweep at the hands of the reds.  last up is tim federowicz's 2012 a&g card.  federowicz is currently getting a shot with the cubs following kyle schwarber's injury. i thought it presumptuous that he, as a catcher, took mike piazza's number when he first came up to the bigs.

a few examples of cards that were considered but not chosen include 2015 topps update adrian gonzalez at #172 (i have a bunch of these cards, but no way the sims was losing out), 1990 leaf kirk gibson at #173, 1970 topps ted sizemore and 1992 upper deck darryl strawberry 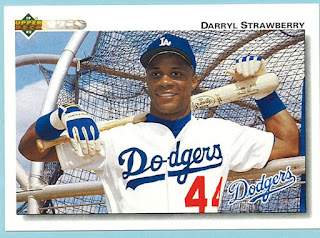 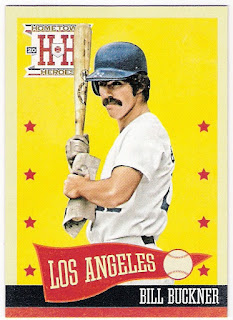 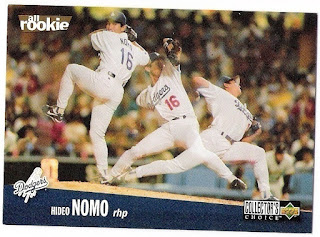 from here on out, there are no rules - any number can be filled by any player from any set.  however, the next sheet does feature eight new sets, along with eight new players.  i wonder who the repeat player will be?
Posted by gcrl at 9:55 AM