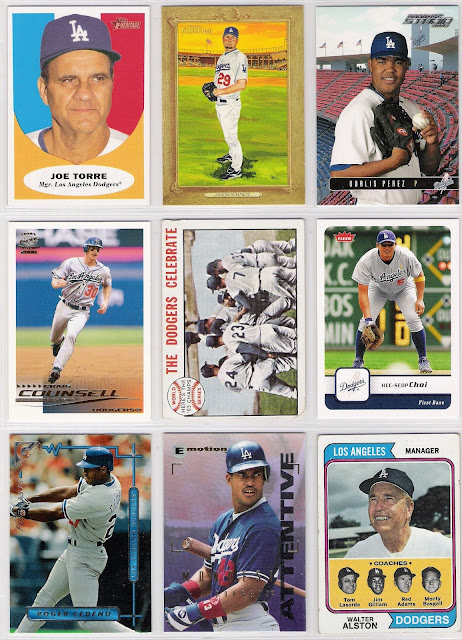 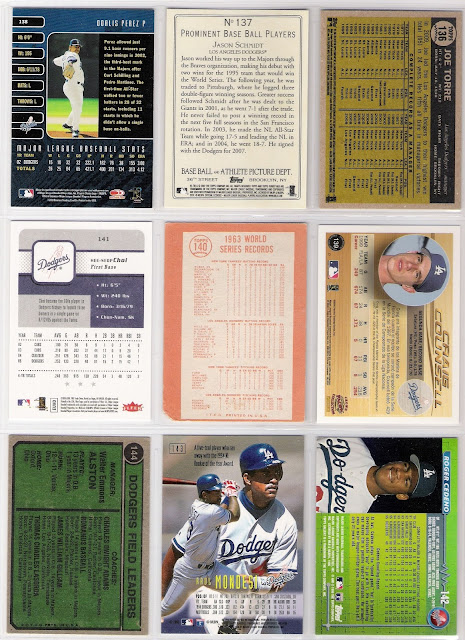 as obvious as it may seem, i did not always have the 1964 topps dodgers celebrate card at number 140.  no, the no brainer of this sheet is the counsell card, simply because it is the only card i know of that features him in a dodger uniform.

this sheet features a couple more dodger managers - torre in the first spot, and alston in the last.  as is customary with topps heritage, the torre card is the same number as alston's card in the 1961 topps set.  it's difficult to believe that turkey red was a stand-alone set from 2005-2007 before becoming an insert set in 2008.  it's even more difficult to believe that the dodgers signed jason schmidt.

the 2003 studio set was a nice set for team collectors like me who appreciate their team's stadium as all of the cards featured backgrounds of each team's respective home.  i'm glad they went with a interior shot of dodger stadium of the top deck, as some cards featured the exterior of the stadiums.

thank goodness for pacific.  they made the counsell card when other companies did not.  counsell was a dodger who appeared in 50 games during the 1999 season and didn't do so well. they released him and he went on to arizona where he was the mvp of the 2001 nlcs.

the 1964 topps card shows the relative mayhem following the dodgers' sweep of the yankees in the 1963 world series.  alston makes a second appearance on the page (he's number 24), and he is celebrating with marv breeding (23), lee walls (7), and pitching coach joe becker (33), with sandy koufax in the middle of the group.

the hee seop choi card is nice with the pirates' scoreboard behind him, and the cedeno card is fairly forgettable as many of his cards are.  and was raul mondesi attentive? i don't know, but skybox thinks so.  i didn't say it earlier when referencing alston's 1974 topps card so i'll say it know - i love seeing coaches on cards.

aside from the 1961 topps alston, other options at number 136 include the 1964 topps world series card featuring sandy koufax 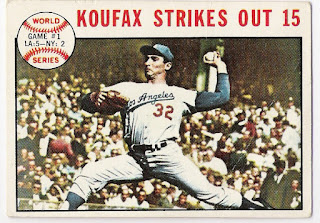 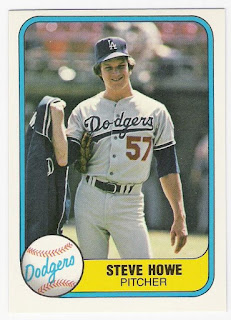 at 137, i chose not to use another 1981 fleer card (this one of bobby castillo with his jacket in his pocket) or the willie davis world series card from 1964 topps.  number 138 could have been a reprint of mike piazza's 1994 topps rookie card from 2001 topps traded or yasiel puig's 2013 topps chrome card among others, and a couple of also rans at number 139 include andy kosco's 1969 topps card of him not wearing a dodger uniform 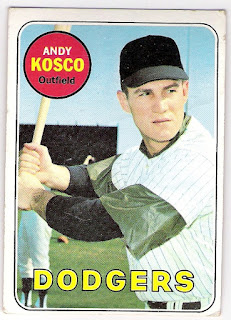 there are some nice cards here, and i really do like the perez card, even if i am pretty sure he wasn't standing in the top deck when the photo was taken.  i'll go with another card featuring dodger stadium - the 1964 topps world series card as my favorite.

i'm not listing the coaches as official appearances, so that's why the alston card is here.  both tommy lasorda and jim gilliam have been featured in the set already, but i think this is the only time we'll see red adams and monty basgall.  a tip of my cap to red and monty!
Posted by gcrl at 9:55 AM